by Eve Fisher
I know that you can get everything on the internet any more, but I still think it's handy to have a shelf of reference works.  I still have a big fat dictionary, a Roget's thesaurus (the on-line ones are awful), Bartlett's Quotations (the on-line ones are almost all modern), a Dictionary of Science, of Language, of Foreign Terms, of Japan, of various other things, as well as the following foreign languages:  Spanish, French, German, Gaelic, Greek (Demotic and ancient), Latin, Chinese, Japanese, and (my personal favorite) Colloquial Persian.
There are history textbooks, of which I have shelves, and also certain history books that I consider mandatory for giving you the real flavor of a time and place (what I call time-travel for pedestrians"). 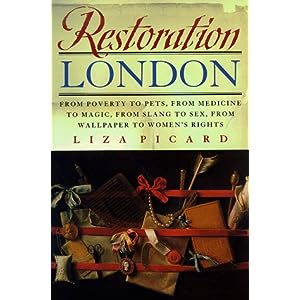 Liza Picard has written a whole series (and I have them all) about London:  "Elizabeth's London", "Restoration London", "Dr. Johnson's London", "Victorian London."

Speaking of every day life, there's the "Everyday Life in America Series", which includes "Every day Life in Early America," "The Reshaping of Every Day Life 1790-1840", "Victorian America", "The Uncertainty of Everyday Life 1915-1945", etc. I have them all.


As some of you may remember, I used to teach Asian history at SDSU.  I have TONS of books on Japanese and Chinese history, and making a list of them...  Well, what do you want to know?  Let's just hit some highlights about Japan for today:

first thing to read is Ivan Morris' "The World of the Shining Prince", about Heian Japan, specifically the 11th century Heian Japan of the Lady Murasaki Shikibu, author of "The Tale of Genji" (Note about Genji - there are 3 good English translations, and I have them all.  I LOVE THIS BOOK.  Feel free to e-mail me any time to discuss it; it's one of my obsessions.)

"Legends of the Samurai" by Hiroaki Sato - from the 4th century to the 19th, these are the stories the samurai told about themselves, building the mythos of the samurai - slowly - over time.

"Japan Rising:  The Iwakura Embassy to the USA and Europe 1871-1873" compiled by Kume Kunitake. See the USA and Europe through the eyes of Japanese who had never been West before - and weren't particularly impressed.  (And who foresee the need for Japan to oversee the Pacific Ocean.)

"Memories of Silk and Straw:  a Self-Portrait of Small Town Japan" by Dr. Junichi Saga - Japan before WW2.

John Gunther (1901-1970) wrote a series of "Inside" books in the 1930s and 40s which are snapshots of Europe and Asia.  I am the proud possessor of two:  "Inside Asia - 1939"; "Inside Europe - 1938".  I consider these priceless because they were written, fairly objectively, before World War II:  and not all the portraits are recognizable by today's standards, especially those of Hitler and his gang. This is BEFORE the world was willing to accept that they were crazy.  Did you know that Mussolini was considered an intellectual?  Did you know that Putzi Hanfstaengl played piano to put Hitler to sleep every night?

Don't forget diaries.  St. Simon's diary of the Versailles under Louis XIV and Louis XV; the diary of Colonial midwife, Martha Ballard; Lady Murasaki and a host of other upscale women of Heian Japan all kept diaries, and let us never forget Sei Shonagon's "Pillow Book"; Parson Woodforde's diary of 18th century rural Britain; Samuel Pepys, of course; and any others that you can get your hands on for the period/time/place you're interested in.  WARNING:  what I've found is that reading a diary of a period/time/place I'm not particularly interested in can generate a whole new passion...

And then there are maps.  Besides collecting all this other stuff (and I didn't even get to the Chinese daily life histories, etc.) I have atlases galore, including a couple that are very old.  (One came with a church insert that explained the League of Nations, which in itself was worth the price of the book!)  I have regular atlases, an Atlas of World History, of the British Empire, of the Middle Ages, of War, of Ancient Empires, etc.  And a bunch of plain old road atlases.  If nothing else, when I'm really stuck, I can pull them out and plan my next road trip...