by R.T. Lawton
I hesitate to write this article, mainly because there is one amongst us who has much better credentials than I do in this particular area. And, that area now in discussion is writing mini-mysteries for Woman's World Magazine, I feel pretty good about having recently sold then my 10th story (that's a total of $5,000 so far), and I don't feel too bad about my .400 batting average. However, it seems to me that our John Floyd has placed at least four times as many mini-mysteries with them as I have and while I have no idea what his batting average is, I suspect it is a lot higher than .400.
Okay, I'll admit to being slightly hard-headed and making my own learning curve in this market. Sure, I could have purchased a copy of the magazine on a regular basis to study how other authors were getting accepted, but I always feel like the person behind the cash register is looking at me funny when they hand me my change and inquire if I'd prefer paper or plastic to carry this woman's magazine out of the store.

Anyway, trial and error showed me that the WWM editor did not want anything related to spies, violence, scary suspense and several other ideas I tried in order to differentiate my stories from the mass in the slush pile. I also found that the stories could not be too complicated.

The setup in a mini-mystery is the plot or storyline which the author uses to present the mystery to the reader for solving. Like any mystery, appropriate clues must be planted in order to give the reader a "fair" chance to come up with the correct solution. Naturally, these clues may be hidden in plain view by throwing them  in with false clues, planting them at a distance in the story from a description of the crime, or even distracting the reader's attention to some other action going on.

Any character arc is so short as to be almost negligible. As for setting or character description, the author has a maximum of 700 words to move around in. In one of my stories, in order to place a memorable image of my detective (sporting a large mustache) into the mind of the editor and that of potential readers, I once described him as looking like a soaked cat coming out of the rain. And, yes, the rainy weather also had to do with a clue to the solution in this one.

Since it often becomes difficult to create a mystery plot for these stories, much less 25 of them, I have adopted the strategy of mining plots from other books, such as those series which present five-minute or two-minute mysteries. I type up all those solutions in a long list and number them. Then, the next time I need to write a mini-mystery, I merely go down the list until one sparks an idea I think will work. This method saves me a lot of downtime scratching my head trying to figure out what to write from Square One. Instead, I get a running start from Square Two. Naturally, my settings and characters are different from the original mining operation. Look at it this way, there are only so many plots or "tribal lays" (according to Rudyard Kipling, there's nine and sixty), so I'm merely acquiring them in the order someone else wrote them and then forming those plots to my own purpose.

The close out part of the mini-mystery actually consists of two separate  parts, the Question and the Solution. They look similar to the following.

Solution:  (Author explains the clue(s) which solve(s) the mystery.)

A couple of suggestions. You can write Why-dunnits, where the reader has to figure out what the detective is suspicious of and why, or write Who-dunnits, where the reader uses clues to select from a variety of suspects. Hey, I just realized I haven't tried a How-dunnit, where the reader has to figure out how the crime was committed. Well, there goes my learning curve again, unless John can give me some tips here. Actually, I'd like to see a column on this subject from John or at least hear how he managed to come up with those 40+ sales to WWM. That's amazing. 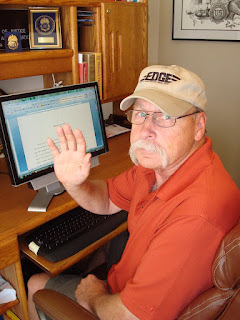 And now I must confess that a few days after receiving a contract from WWM for my 10th mini-mystery as mentioned in my last blog, I went to the mailbox and found another white, #10 business envelope postmarked from Seattle. Sadly, there was no contract in this one. My .400 batting average just took a dip.

It's my own fault. I violated one of my own learning curve rules, the one about not having the solution depend upon a little known fact. Rob can tell you I mentioned this rule to him last year, long before I wrote this latest rejection. One of these days I've got to start listening to myself. But, it was such a good story and I was in a hurry to get on the road to South Dakota for a few weeks to help take care of my mother-in-law (my biggest writing fan), so I sent it anyway. Otherwise, I'd have run it by Rob and he could have saved me the postage. Next time.
Posted by R.T. Lawton at 00:01