It's a Long Story

Hiking into No Man's Land

Marketability is of course not quite as big an issue these days, since the publishing and self-publishing of e-books has allowed novellas to be presented as easily as novels and shorts--but the novella does remain something of an oddity.  For those writers (like me) who continued to publish quite a few stories the traditional way, there just aren't many print markets out there that will consider novella-length manuscripts.  Very few high-circulation magazines accept novella submissions, and not many anthologies either.  The only easy way to publish novellas in print form seems to be via collections by established authors like Stephen King, who group four of five of them together in a book.

This past year, I sat down just after the Christmas holidays, when all our kiddos and grandbabies had left and our house was as quiet at Tut's tomb, and wrote a 16,000-word western mystery.  That's not quite in novella range (some editors consider the starting point to be around 20K) but it's close enough to make that story difficult to sell.  So why did I write it?  And why didn't I at least make it shorter or longer, so it would "fit in"?  Well, if you're a writer, you know the answer to that: some stories just have to be a certain length.  To have added more would have seemed like "padding" and to have taken anything out would have hurt the story.  As it turned out, I'm satisfied with it--but I do realize there's a real possibility that the manuscript might never be read by anyone but me, and that I might one day wind up using it for scratch paper, or to prop up a wobbly table leg.

There seems to be only one real advantage to writing novella-length stories: they translate well into screenplays.  When a short story is adapted to film, something has to be added to it.  (Example: 3:10 to Yuma.  Elmore Leonard's short story begins when the two main characters are already in town, sitting in the hotel room; by the time that scene happens in the most recent film version, the movie's more than halfway done.)  Conversely, when a novel is adapted to the screen, something has to be left out.  (Example: almost any novel/movie you can think of.)  So far as I know, there are only three ways to successfully avoid those problems:

1. Adapt a novel into a miniseries (Centennial, Lonesome Dove, Shogun, The Winds of War).

Again, well-written novellas usually become good movies.  I'm reminded here of two by Stephen King: Rita Hayworth and Shawshank Redemption and The Body.  Those were adapted into the outstanding films The Shawshank Redemption (Frank Darabont) and Stand by Me (Rob Reiner), and I believe one of the many reasons that both were so good was that they were so faithful to the original stories.  There was little need to either trim or inflate them.  The same holds true for Norman Maclean's novella A River Runs Through It, which became the excellent movie by Robert Redford. 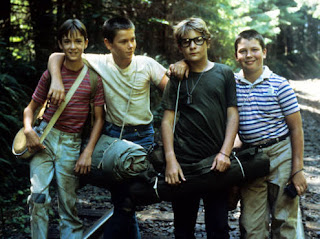 I can't resist listing a dozen of my favorites:

NOTE: Many of the above did result in darn good movies.  And some didn't.

What are some of your favorite novellas?  In general, do you find them more enjoyable than novels or shorts?  Less enjoyable?  Do you have a preference?  (I don't.  To me, length doesn't matter if the story's good.)

Besides, the term "novella" is subjective.  I've heard people refer to A Christmas Carol as a short story and to The Old Man and the Sea as a novel.  But who really cares?  Good fiction is good fiction.

I also heard someplace that if you'd like to read Herman Melville and you aren't in the mood to read 800 pages about a hunt for a sperm whale, Billy Budd is a reasonable alternative.  (Sounds reasonable to me.)

The following silly poem might be a good way to close this silly discussion.  I call it "In Literary Terms."

"A short story's simple, but what's a 'novella'?"
Joe asked writing teacher Ms. West;
"And how do I know 'novelettes' when I see them,
And what's a 'short novel'?" he pressed.
"In fact, why not just call all three the same thing?"
Joe continued while scratching his head.
Ms. West just leaned forward, face solemn, eyes twinkling;
"Well, that's a long story," she said.