by Eve Fisher
I've had out of town guests the last week and a half.   New composition was out of the question.  So, for your reading enjoyment (I hope), a story of mine that was published in "Green Prints", a gardening magazine, in August of 2002.  Also, historically, the first appearance of Officer Grant Tripp... 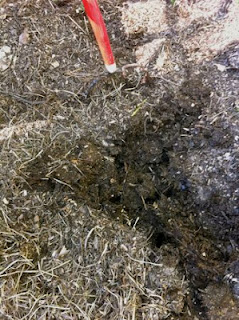 By the end of May, Mary Olson’s future asparagus bed was five feet wide by eight feet long and getting deeper every day.  It looked, we all agreed, just like a grave, and the only question was what to bury in it.  Most of us put her husband at the top of the list, but not Mary.
“Not on your life!” Mary cried.  “I plan to be eating from this patch for twenty years, and that means I’ve got to lay down enough fertilizer to feed it all that time.  Now you tell me, would you want to be eating off of Ed for twenty years?”  You couldn’t argue with that.
Nobody had ever seen Mary work so hard.  She’d come home from working at the water treatment plant at four, and head straight for the back yard.  Felix, her cat, was right behind her as always, silent and stiff-legged. He was eighteen years old and he followed her like a dog.  She’d pet him a bit, set her beer can on top of the fence post, pick up the shovel, and have at it.
She dug it all by hand.  The shovel was way too tall for her, but she wouldn’t use the short kind because they threw her back out.  She wore big heavy work boots and tied her head up in a bandanna to keep the mosquitoes out of her ears.  Her hair, linen yellow and tightly permed, poofed up over the bandanna just like a poodle’s.  From the neck up she looked like Rosie the Riveter; from the neck down like Roseanne. 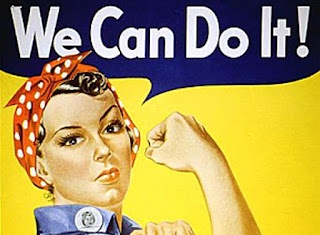 You never saw anyone dig so carefully.  She kept the sides straight as a ruler, sifted the dirt clean of trash, and clipped the roots away instead of hacking them with the shovel.  The cleaned dirt went into a big pile by the hole, the roots and trash into a paper sack.  She took her time, and since Ed always lingered down at Mellette’s Lounge, she had plenty of it.  Two hours and two beers, with Felix curled up in his favorite spot under the lilacs, watching her sweating hard, creating the ultimate in cat boxes.  Well, don’t you think that’s what he thought about it? 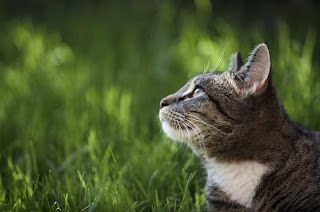 God knows what Ed thought about it.  Maybe he didn’t.  As long as he had his dinner hot and ready whenever he floated on home, he didn’t care.  Mary said his favorite meal was frozen fish filets, microwaved to perfection, so the menu wasn’t hard to plan.  She bought them by the case, along with boxed macaroni and cheese dinners and canned green beans, and that’s about what they lived on, because Ed wouldn’t eat anything else and neither would Mary.
Which is why I wondered about the bed.  I mean, if Mary had finally developed a yen for fresh asparagus, all she had to do was go out and hunt it in ditches like the rest of us.  Instead, there she was, every afternoon except rain and Sundays, digging away.  Oh, well.  Actually, it turned into quite a tourist attraction.  Everyone dropped by sooner or later.  Mary would stand back and sip her beer while Felix hid and we all looked and nodded and wondered, by the time it was a foot and a half deep, if it wasn’t deep enough.
“I’ve got to go down another foot or so,” Mary said.  “That’s what double digging’s all about.  Then I can work in a couple of good thick layers of manure covered with dirt, and then I can lay out my roots.”  We all nodded like we’d just finished doing the same ourselves.  “I want it to last my lifetime at least, so I’ve got to do it right the first time.”  And we all nodded again like it was gospel.
She dug the bed two feet deep.  She dug the bed three feet deep, and the kids started asking if she was digging to China.  She dug the bed four feet deep and we started worrying a little, especially when Ed went off to the VFW one night and never came back.  No one even remembered seeing him arrive.  After he was missing three days, Mary called the police and Grant Tripp came out and talked with her while she worked the bed.  They talked about the weather, Ed’s gambling, asparagus, Ed’s drinking, Mary’s cousin (Grant’s wife’s brother-in-law), Ed’s gambling, the weather, and Ed’s drinking.  It was only after Grant got back in his car that he realized Mary had been filling the asparagus bed in instead of digging it out.
Things got a bit strange after that.  Folks started giving Mary funny looks everywhere she went, like they were trying to gauge if she was big enough to lug a dead man around, and she certainly looked like she was.  After a while she quit going out much, except to get groceries and beer, and when she did she jerked and snapped and glared at you when you spoke to her.  She was way too sensitive about everything, I thought.  I mean, it wasn’t our fault we couldn’t quit thinking about that hole in her back yard. 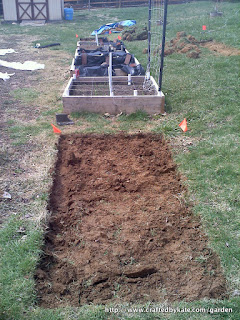 That’s why it was a real psychological relief when Judge Dunn okayed the warrant to search Mary’s house and property.  Grant was there the next day, with two officers, two workers from Hegdahl’s Construction, and a back hoe.  The officers went inside while the back hoe went to work outside.  Mary stood by her back steps and watched them with a face like granite.  And her face collapsed like a mud slide when they dug up Felix.
We’d all been so worried about Ed that no one had noticed that Felix hadn’t been around for a while, either.  He was so old he must have just died in his sleep, and Mary had buried him in the back yard, the way most of us do, in his favorite spot.
Well, everyone felt awful, looking at poor Felix, lying in the middle of all that mess.  Mary’s back yard looked like someone had taken an egg beater and whipped dirt everywhere.  It was piled two feet deep in the lilacs alone.  Grant and the back hoe boys offered to help clean it up, but Mary said she thought the cure would be worse than the disease, so everyone went home and left her to it.  It wasn’t until after dinner that it finally dawned on people that Felix’s favorite spot was under the lilacs, not in the bed.  The back hoe was back out at Mary’s the next day. 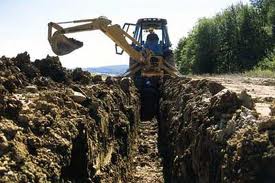 This time Mary didn’t come out, and I can’t say I blame her.  I mean, she knew what was out there, and she knew they’d find it, even if they had to tear those lilacs apart.  But Mary hadn’t had time to dig under those tough, tall lilacs.  She’d dug beside them, and the backhoe didn’t have far to go before Ed’s body was found.
Mary went to jail, and her sister sold the house to the Corsons, a farm couple from Canova.  They’ve lived there for ten years now, and every year, that asparagus bed comes up thick and lush and mouth-watering.  Not that anybody picks any of it.  I mean, we all know Ed wasn’t under there that long, or that near, but as Mrs. Corson says, you can’t be too careful.
But I’ll tell you what, Mary knew what she was talking about.  You do your asparagus bed right the first time, double-dug and heavy on the fertilizer, and it’ll last a lifetime.


NOTE:  The inspiration for this story was that I dug an asparagus bed in my back yard, by hand.  I have no living resemblance to Rosie the Riverter or Rosanne (yet), but other than that, it's fairly accurate, down to the beloved cat watching me dig the world's largest litter box.  Many, many people came by and watched me dig, because around here most people get their asparagus wild, from ditches.  Many people, beginning with my husband, commented how the bed looked remarkably like a grave.  Many people suggested that my husband watch out.  My husband is still on the right side of the soil, but the asparagus bed did not make it - a winter from hell killed almost everything, including my lush, thick asparagus bed...  It almost broke our hearts.  Back to the ditches...
Posted by Eve Fisher at 00:01