Usually,  "Are you sitting down?" introduces conversations that deal with topics that are shocking--either tragically or wonderfully.  In this case, the question is meant literally and directed toward the writers among us.  Perhaps I should expand the inquiry to, "Are you sitting down when you write?
When I first considered this, I thought that people with computers probably always write sitting, but with a laptop or the proper positioning of bed or couch and computer, writing can be accomplished while lying down.  Personally, I know a couple of writers who still write in long-hand before moving their work to a computer.This would make writing while reclining easier.  I also have a friend who writes everything on his Ipad. 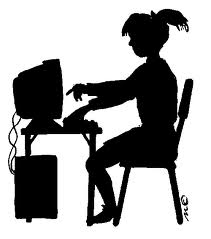 I always wanted to try gravity boots. However, I'm afraid my writing posture is conventional, just a char and my pad or laptop.

Good column.
You might add Napoleon who 'wrote' by dictating sometimes multiple messages to multiple secretaries.
There's a man who had problems!

Nothing exciting about my writing posture, I'm afraid. I sit at a desk and tap, tap, tap. In fact, I'm doing it right now.

Sitting, clothed, and sometimes in my right mind.

Let's not forget Frederic Brown who liked to take long bus rides. As for me, I pace a lot between sitting down at the 'puter. I have written sitting in a delivery truck, feet propped on the dashboard using pen and spiral-bound notebook. Parked, of course!

My habits have changed with the times. BC I would often write longhand and then type, revise, retype ad nauseum. My handwriting is so bad that I often had difficulty interpreting it.

Of course I now use the computer,(sitting down, naturally and cursing it for doing exactly what I ask it to do, even though that isn't what I want it to do.)

J.K.Rowling wrote in a booth in a diner. I can understand that.

I was sort of like Jeff and Herschel combined, pacing, then writing in longhand until I was satisfied, and finally transcribing to computer. Now I lounge with my laptop.

One of my friends writes flat on her back with her legs elevated. (I feel compelled to add she would be clothed.)

Thanks for tbe comments. I think more people write at desks since computers became so available. BC (I love that,Herschel) I wrote anywhere and everywhere, in all sorts of positions with varying attire. I still think through plots most often when I'm driving alone. I confess that I discuss them with myself aloud. Eve, does that make me sometimes not in my right mind?
At this moment, I'm pecking out the words left hand only due to surgery on the right.
Thanks and until we meet again..remember to use waterproof ink if you write in the bathtub.

Nothing more comfortable than being in your room, wearing white cotton nightdress or shirt. That's the best place for me to write because it's my own personal space and I like the peace and quiet.