My Two Cents Worth


I thought for this post I’d throw in my two cents on the controversy of literary versus genre fiction. We read stories to vicariously satisfy our desire for pleasure and to sometimes explain reality. So why the separation? To satisfy our need to categorize to avoid confusion, to clarify in our minds how the world works. Enough philosophizing. On to my meditation on the subject.

The argument boils down to this: genre fiction is plot driven and literary fiction is character or theme driven. Literary fiction appeals to our intellect and emotions while genre appeals only to our emotions.

Although readers may get more out of fiction than entertainment, stories above all should entertain. But no matter whether it is genre or literary fiction, both require craftsmanship, for it is in the craft that effects on the reader are achieved. I admit in some genre stories the line between good and evil are sharp and clear and may not be so clear in literary fiction, but isn’t it possible that the clarity can make you as a reader think seriously about the human condition? And isn’t it possible that literary stories may be read for sheer enjoyment without any deep thinking about the human condition?

In an attempt to clarify the situation in my mind, I analyzed two crime stories, one literary and the other genre, by two  great writers. 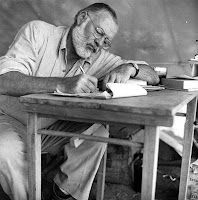 In Hemingway’s story “The Killers,” two hoods, Max and Al, enter a diner and tells the counter man, George, the black cook Sam, and Nick Adams that they are there to kill Ole Andreson. The killers leave without hurting anyone because Ole, a former boxer, failed to come to the diner that day. When Nick later tells Ole about the two men, he says there is nothing he can do. He is resigned to his fate. The story certainly is not plot driven for what little plot there is suggests more than shows what is happening in Ole’s mind. The story is literary fiction.

Hammett’s “The Man Who Killed Dan Odams” is a plot-driven story about  how a woman outwits the man who killed her husband. The man who killed Dan Odams escapes from jail and takes refuge in a house with a woman and her 12 year-old son, not knowing she is Dan Odams’s widow. She recognizes him and tricks him into believing she sent her son outside to watch for his pursuers. The son in fact runs to a neighbor’s place for help. As he is dying, realizing the woman is Dan Odams’s widow, the fugitive expresses admiration for her avenging her husband’s murder. No question the story is plot driven.

Neither story enticed me to think very seriously about fatalism or revenge. I simply enjoyed reading them.

I also analyzed and enjoyed a story by a not so well known writer that made me think. In “A Jury of Her Peers” by Susan Glaspell, John Wright is murdered in his bed. His wife Minnie is suspected since she was the only other person in the house, but the men, Mr. Hale, who found the body, the sheriff, and the county attorney, don’t find any convincing evidence in the bedroom  crime scene that would convict her. The two women, Mrs. Hale, and Mrs. Peters, the sheriff’s wife, inspecting Minnie’s things in the kitchen, find an empty bird cage. The dead bird they find in the sewing  basket suggests Minnie had taken as much abuse from John as she could and his killing her bird was the proverbial last straw. This story made me think about the perennial theme of how women and men see things differently.

Literary or genre fiction, does it really matter so long as you enjoy the story. Like Daniel Abrahams on the SFsignal website in his essay “A Private Letter from Genre to Literature,” I too plead, “Please, please, darling let us stop this.This artificial separation between us is painful, it is undignified, and it fools no one.”

Except maybe a few literary critics.

Louis, stimulation of the intellect is precisely why I turn to my two favorite genres, mystery and science fiction. In the case of mysteries, I like the puzzle– figuring out the crime. In science fiction, hard sci-fi should make people think… about society and ourselves.

I fully agree with you… why all the fuss and bickering? All we want is a damn good story.

Maybe the fuss goes on because the literary critics need something to argue about.

Louis, the literary versus genre fiction definition will be argued over for generations to come. To me, other than the flat line (New Yorker Magazine) literary plot versus the rising crisis genre plot line, I tend to define a literary mystery as the best written, best crafted mystery an author could make. One that's written on a high level.
As I once heard the story at a writers conference, Dennis Lehane got his MFA and then had to make a decision. If he wrote literary, he would be accepted in the academic world, but if he wrote genre then he would always be considered as a genre writer. He wrote a few genre detective novels and then he wrote Mystic River, which was considered by many to be a literary novel of its time.
Bottom line, I think genre fiction can always be genre, but some well written genre can rise to the level of what some call literary. Me, I'm a genre writer bumping on the ceiling below literary and happy to just be a story teller.

Me, I'm a story teller, and sometimes I think I turn the style meter up a few notches. Some genre fiction is obvious (Harlequin romances, anyone?); others that are stuck in the genre category can be really questionable (why is Anne Tyler a "woman's writer" when Jonathan Franzen is up for Pulitzers with the same topics? - and, as a disclaimer, I have to say I prefer Tyler's style and topics...). Let the critics make their picks, I just keep reading. So many books, so little time...