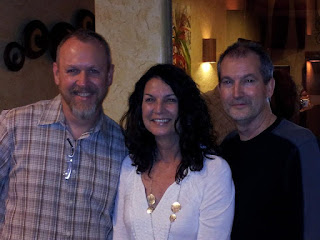 Today I have to succumb to being a rather prejudiced mother. My oldest son, Phil Lee, wrote a rather interesting ad entertaining blog this week and I decided to reprint it here. Think y'all will enjoy it.

In the photo at right, Phil Lee is the dark haired young man on the right. Middle is my daughter, Karla and left is my son, Roger Grape.


After over 30 years, I have fallen in love once again with vinyl records. Yes, I know, I am about 5 or 10 years late to this fashionable party, but I am finally back where I started after all these years. I think that LPs started to build up steam about 2007 and have been rising every year, fueled by interest from old geezers to young hipsters.  I know a few of you out there never really left, and still have record collections and nice systems that you have faithfully maintained. But in my lifetime going from LPs and 8-tracks to cassettes, CDs and then totally digital, I never dreamed I would ever own or buy or play or enjoy these artifacts of yesteryear, but here I am once again. Let me back up a bit… 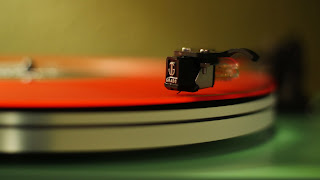 About 2 years ago, I purchased an amp to add to our speakers in the den. My plan was to enhance audio for the TV, and then also have a way to plug in a dedicated ipod for digital music. That worked out great- but I noticed the music quality was not really that impressive with the volume cranked up to a decent level. For years, I have enjoyed the convenience of  itunes on my office computers and in the car, but never really played digital music on a higher end system. The compression of digital files has left us all with an inferior, muddy sound- and certainly not anything most artists and musicians intended us to hear when listening to their creations. 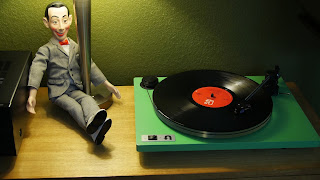 However even with all the shortcomings of digital music, the ability to discover a new band online, and then within seconds purchase a track or an album, (or for some people, steal it) and then instantly hear it- still feels amazing to me. Also the convenience and portability to have access to all your music on a tiny device is something I never dreamed would be possible in my lifetime. Patton Oswalt has a funny bit about how if he could go back in time and confront his younger self and explain how in the future every song in existence will fit on something smaller than a cassette tape. (and his teenage mind would be instantly blown) He then compares how jaded our youth have become with this technology-  it's just something they have grown up with, and holds no magical amazement that greeted us older folks when it was released. 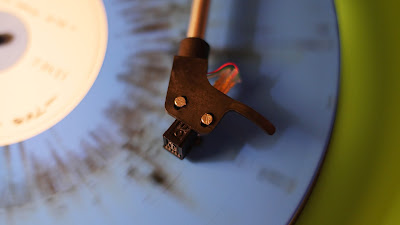 Although with all that being said, it's really an odd acceptance we've all grown accustomed to over the years: this trade-off of convenience and accessibility over audio quality. A lot of that stems from compression, the device and the environment that the end user experiences, limited by computers, phones, tablets, etc. I recently saw a Dan Rather interview with Jack White. When discussing technology, White draws a comparison between streaming movies online and digital music. He admits that it's great to have the convenience of enjoying movies on the little screens of tablets or computers or phones. But then he adds: when you drive past a movie theater, everyone agrees THAT is the real place you go to experience a movie in its intended format and environment. And the equivalent finished product for the music industry is vinyl and a decent sound system.

A couple of years ago as I continued my quest for better sound, I stumbled on to Neil Young's Kickstarter campaign for his new PONO music player. It looked intriguing at the time- a way to play high resolution music files in the car or on the home system. I asked my son about the concept and he just laughed at me and said: "just get a turntable." I was hearing more and more about the revitalization of the LP market in recent years, so about a month ago I walked in to my local Best Buy. They had  exactly one turntable- very bland, very basic, and its big "feature" was a USB port so that you can transfer all your old records to digital. Ouch- not really what I had in mind! 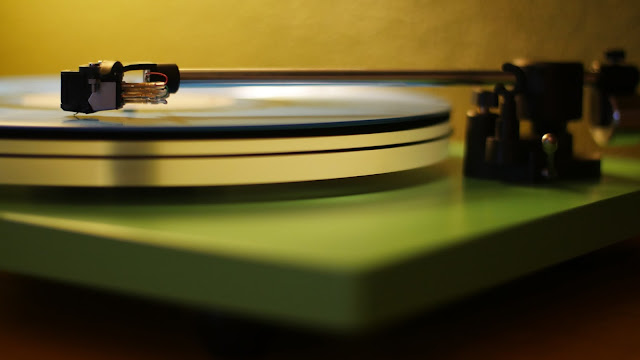 I did some online researching and found the answer: The Orbit, a really sweet turntable made by a small company called U-Turn, located in a suburb of Boston. Three guys in their 20s set out to design and manufacture a turntable that looked cool and sounded great for only $150, and to somehow make it here in America. They had a successful Kickstarter campaign, and as of Fall of 2015, have shipped over 10,000 units. They did not quite make their original price point- but came close as their base unit sells for $179. They also offer an interactive online customization tool that allows you to select color, platter type, cartridge and a few other options. 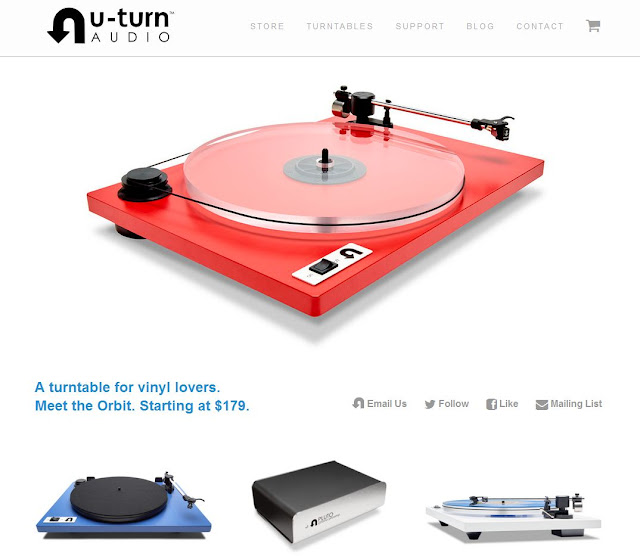 The ability to support an American company- especially one that manufactures an electronic product, is very rare in this day and age! The majority of the turntable elements are made here at home in various locations across the country- although some of the inside parts are from overseas. Everything is assembled by hand at the U-Turn facility. Customer service is excellent- and if you have any issues, changes or future upgrades, you are dealing with someone in the Boston area, and not from an out sourced overseas imposter. 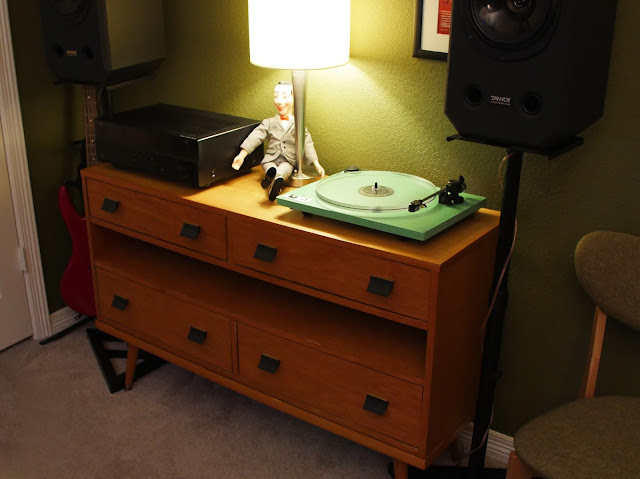 Reviews looked solid and the photos were great, so I quickly made the plunge. I've had the unit about 2 weeks and continue to be amazed at both the sound and the look. I can turn up the volume and hear a sharpness of detail that's been missing for decades. I've already had 3 or 4 "goose bump" moments hearing specific sections or little nuances that have been hidden within songs from my favorite old bands from the 80s. One of the greatest joys has also been re-listening to newer bands I discovered only in the last 10 years or so.  Up until now, my only point of reference for those bands has been limited to compressed digital songs. But now on LP, the clarity and detail really shines. It's a night and day difference of listening experience. 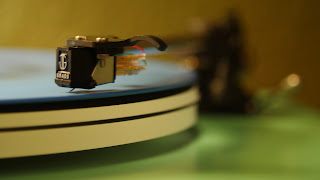 I know its just stupid nostalgia, but putting  a record on the platter, and hearing that "bump" as you carefully drop the needle down just feels strangely familiar and comfortable.

Holding an album in my hands, looking at the artwork or reading the notes or lyrics is a long forgotten pleasure.

Even playing some of my old stuff that have a bit more crackle and pop during the quiet moments only add to the experience. 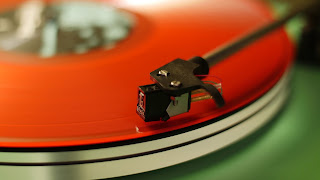 I have the turntable in my office, so although a lot of its use so far is typical background music while I edit, I have noticed an entirely different feature that was really unexpected. Playing a record requires more effort- there is something so primitive about the technology, and about the entire process. You can't really pause it, and you have to be there to pick up the arm at the end of a side. (this unit has no auto return)  It almost feels more like an event in and of itself. Sitting and doing nothing except listening to the music and watching that disc spin is all you need. Playing entire album sides have also an added benefit. I am already enjoying several buried "deep" tracks that I long neglected during this age of just downloading  favorite digital songs, and ignoring those other lesser tunes that did not immediately grab my attention. 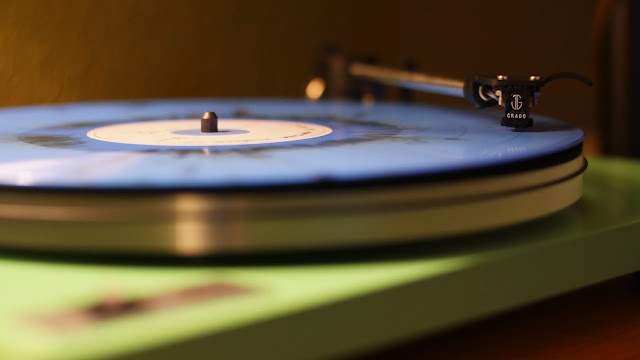 So if music matters to you- consider going old school and embrace the vinyl once again. My only regret is not taking better care of my collection. I found one box, but another is still MIA, most likely in my attic. Of the records I did find, most are warped- but all in one direction, so at least I still get to enjoy one stable side.

DISCOGS.COM is also a great resource for buying and selling LPs from around the world. 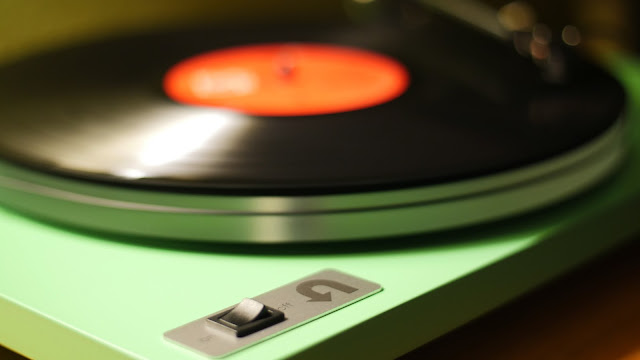 Share your vinyl memories below in the comments section, and thanks for listening!

NOTE: from Jan
Phil's turntable is sitting on furniture my Dad made in late 50s early 60s.
Posted by Jan Grape at 00:01 10 comments