I am a child of the digital age. Or at least the digital age grew up around and alongside me. But, alas, I never grew up with it. I remain but a tiny, tiny child. 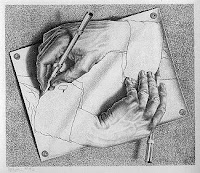 And when I read a few weeks ago that a third of British children under ten have a mobile phone, a sixth have a laptop and a twelfth have a social network account, the horrid dimensions of my infantilism became clear.
Witness, I thank you, the unedifying porridge I made of my first attempt to contribute to this blog.

All can be summed up in a Groucho Marx line, as can so many things in life:

As a non-grown-up in this vertiginously adult world, what I am doing now is typing, not writing. I still feel it is cheating to stare at a screen on which the pixies are forming my words. (I know, I know, everyone calls them pixels, but I know The Truth. They are the pixies, and they are fractious, fickle little blighters whom it is best not to vex lest evil befall.)

'Digital' to me means you do it with your fingers. Writing is something you do with a pencil and a piece of paper.
When long ago I began writing scripts for cash money, up there on the Writers' Floor we wrote in pencil (or pen - the rules were not set in stone) on an A4 pad, and our scripts were typed  by a proper typist called Camilla. When changes had to me made because the Suits demanded it, cut and paste meant precisely that. Camilla typed out the offending passages, cut them out and pasted them into the master script. Consequently, copies of the script sometimes contained pages on which sections of dialogue were ver so slightly skewed with lines round them like a bad collage. (Mind you, I've nothing against collage. Picasso dabbled in it, during what I believe is now known as his Glue period. And even Ernest Hemingway once famously said: "When I hear the word collage, I reach for my gum.")

Our first computer, a DEC I think, was, in fact, a room. Its capacity was shared with Accounts, so that very often production of a script would be held back because Accounts were doing big sums. I suppose that the capacity of all that wheezing, throbbing metalware was a tiny fraction of that of the tiny machine on which I work now. And we were frightened of it. We called it HAL.
(Incidentally, here's a thing. Arthur C. Clarke was a cunning bloke. If you take the name HAL and take a step forward in the alphabet for each letter, what do you get? All right, everybody knew that.)

It wasn't until the 90's that I was brought face to face with the computer as a personal tool. But I still held on to my yellow HB pencil and my spiral-bound notebook. I still do. All my published stories were written first by hand. Some of my happiest hours have been spent unfurling the Big Parasol, furling a cigarette (yes I know, Dixon, I would have been useless in the US Special Forces) pouring out a Little Something and settling down with pencil and notebook to see what my wandering brain will drag in. I never know what it will be - my brain has a mind of its own.
I've still got my notebooks from ten years ago. And it amazes me that these spiderish scrawls ever found their way into print. Among all the stuttering and stammering and crossings-out and balloons and arrows, there are little notes. Sometimes a one-word plot idea, sometimes just a title. I've  got some knock-out titles. Titles for which the story never turned up, but might one day, who knows?
Life down here among the pencilleros will forever be associated with the wonderful taste of cellulose and the gritty feel of graphite betwen my teeth. Apart from anything else, an HB pencil smells good. And by golly, mother, it tastes good too. What's more, an HB pencil doesn't stare moronically at you and deny, hand on its traitorous little heart, that you ever, ever wrote a story called 'Detour'. Faced with that mulish stupidity, even the old Yorkshire trick of weeping and pleading  cuts no ice. I've tried it.

Once I have done my typing, it still isn't finished. I have this thing about reading a wodge of typescript. I can read it and understand it, but I can't take it in as a whole. I have a problem in comparing and contrasting this scene with that scene ten pages before. At the end I know whether it works or not. But that isn't the whole story. Is everything working well down in the bowels of the thing? Because, you understand, for me, never mind your novels, every single story is an aircraft carrier.
What I have to do is the following: physically lay out the story page by page on the dining-table. (If it's a novella, which has happened once or twice, I have to pull out both leaves of the table. What I am going to do when the Book is licked into shape is anyone's guess. Mimi might have a word or two to say about a forty-foot refectory table sticking out into the garden through a hole roughly hacked through the wall. But I'll burn that bridge when I come to it.)
When it's all laid out, I sit high up on the back of a chair and look down on the whole work. Like that, I can see everything. I can see what works and what doesn't. I have been known to talk during this bit: "You must be mad. That bit doesn't belong there. It's too early." or: "That bit's too long and lumpy. Why don't you break it up with some back story from that bit over there."
People who walk in during this process usually make an excuse and go hurriedly about their business.

After that I have to edit, using the hated C&P. But even then, it isn't finished. I put it in an envelope and place it on the table by the door. There it sits, sometimes for a week or more, until I know I am really happy with that last line, or until Mimi threatens to put it into the recycling bag. Nobody ever reads my stories except me and the editor. Mimi doesn't read English very well, and because I'm bad at oral storytelling, trying to tell and explain a story to her is like trying to explain the leg-before-wicket rule to a young owl.
So, all in all, writing chez nous is a bit of a cottage industry. I keep expecting tourist groups from Osaka and Wichita Falls to wander through and take photographs. I also feel that, at the same time, Mimi should be stitching together little linen bags of lavender, or fashioning litle pottery animals. I haven't suggested this : I may be mad, but I'm not yet suicidal.

My fervent hope is, that perhaps, just perhaps, contributing to Sleuthsayers is going to force me to join the grown-ups.
But, to prove that I am on the way to becoming a Big Person, I have to get this piece on the blog. This may take some time. First I have to run out and find a five-year-old child.
Posted by Neil Schofield at 00:01 8 comments