Christopher Columbus named the speck of land he found out in the Caribbean after the day of the week he discovered it. The day was Sunday, November 3, 1493. Sunday being Dominica in the dead language of Latin. At the time of his discovery, the Caribs were the owners of said island. Naturally, the Caribs knew where they were all that time and weren't really happy about being discovered by some Italian out on a cruise to find India for the king and queen of Spain. Due to the isolation of the island, plus the ferociousness of the Carib warriors, the Spanish left Dominica alone for several decades. France eventually established a colony, but ceded the island to Great Britain in 1763, Then from 1958 until 1962, Dominica belonged to the short-lived West Indies Federation before becoming an independent nation in 1978. Three years later, a conspiracy of mercenaries had their own plans for the island. 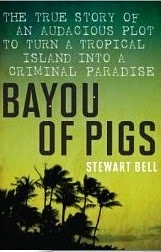 Mike Perdue of Houston and Wolfgang Droege of Ontario put their heads together in a plot to overthrow the government of Eugenia Charles. Their idea was to help ex-Prime Minister Patrick John and his Dominica Defense Force regain control of the island. In exchange for their services, the two mercenaries were supposed to have control over the future of Dominica's development: testimony presented at their subsequent trial said they were to have the island to use as a drug trafficking base.

Unfortunately for the conspirators, the FBI received knowledge of the attempted coup and thus Operation Red Dog was doomed to failure. The ship hired to transport the mercenary group never sailed from New Orleans as scheduled. Seems someone approached a journalist about an "exclusive story" and the journalist felt compelled to contact the police. Talk about your dumbest criminal of the year award. In the end, Droege and nine co-conspirators, to include white nationalist Don Black, were charged and tried. The entire fiasco was soon termed as the Bayou of Pigs and a book by the same name was written about the intended takeover of the island of Dominica.

As for me, the only "hot water" I got into was during the Champagne Snorkeling Tour which had nothing to do with consuming the famous bubbling wine of France. Seems that Dominica is one of those islands created by volcanic activity and there is still heat coming up from the ocean floor. I quickly found myself swimming through a mass of multiple streams of small bubbles rising from the coral twenty feet below. And yes, the water was warm, not at all cool like the rest of the Caribbean Ocean.

Other than that, just be advised that the residents of Dominica get a little touchy if you confuse them with the Dominican Republic which is the old Spanish half of the old French island of Haiti. Both islands are in the Caribbean, just be clear when you book your travel ticket or you could end up with a surprise.

See you in Grenada in two weeks. Just so you know, that's the island in the Caribbean, not the city in Spain. To help you out, the island is pronounced Grenade-ah (as opposed to the Spanish city of Gra-na-da) and is the place Clint Eastwood (as Gunny Highway) invaded in the movie Heartbreak Ridge.
Posted by R.T. Lawton at 00:01 5 comments