It seems appropriate on this Election Day to end all Election Days to write about a short story I have in the current (November/December) issue of Alfred Hitchcock's Mystery Magazine: "Eat, Drink, and Be Murdered." It's a whodunit. Not what you'd call a political story at all. But it involves a newspaper and its role in our democracy, and, sadly, these days that has become a political topic.

The story is about the owner of a small city newspaper and the lengths she'll go to try to save the paper because she believes in the important role journalists play in our society as a check on government--national and local. I grew up believing in that role. While reporters sometimes make mistakes, because that's what humans do, I believe most of them are good people who strive for accuracy and fairness, sometimes risking their lives to share the news. It breaks my heart that so many people these days think otherwise, that they don't believe what reputable news organizations report and repudiate journalists as the enemy. They are anything but. Journalists play a vital role in our democracy. 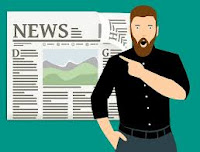 This negative mindset toward journalism is not the only reason many newspapers are struggling these days and so many others have closed. The advent of the internet has, as we all know, led many people to seek their news online, often without wanting to pay for that privilege. But news gathering isn't free. Even if all newspapers went completely digital so that the cost of paper and printing could be saved, there still would be reporters to pay, as well as editors, graphic artists, photographers, the people who work in advertising and composition and circulation and probably other departments I'm not thinking of right now.

I appreciate the newspapers that offer online editions and allow people to check out the occasional article for free. But I also understand why newspapers have firewalls and only allow you to view a limited number of stories per month without paying. Democracy has its price, and one way to help keep democracy going is to support newspapers, which shed sunlight on government and remind politicians that they work for us, not the other way around. You support newspapers by paying for your news. And you support democracy and the First Amendment by treating journalists with respect. 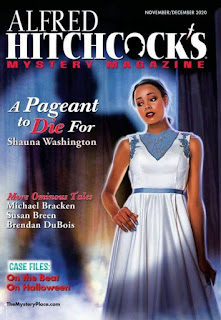 Now I'll get off my soapbox and tie this back in to my story. In "Eat, Drink, and Be Murdered," Meghan, the owner of that newspaper in a small Virginia city, is facing the same financial crunch that so many papers are these days. She's come up with what she hopes will be a great solution: running snarky restaurant reviews. She thinks they're all in good fun, that there's no such thing as bad publicity--for the newspaper or the restaurants. The reviews will encourage readership and advertisers, she predicts, who'll be attracted by the increase in circulation. And she's right. There is an increase in circulation after the new reviews start to run, and advertising grows too. But there are also some things Meghan didn't expect: angry restaurant owners, a bomb threat, and ... of course, murder. It's a difficult lesson for Meghan to learn, that easy solutions can have steep, unexpected costs, especially when news gathering and entertainment values collide.

This issue of Alfred Hitchcock's Mystery Magazine can be purchased from the usual sources, including bookstores and newsstands. If you subscribe to the print version, they'll mail a copy to your home every other month. You also can read the magazine digitally. Individual copies and subscriptions can be purchased for your Kindle and other types of e-readers. Magazines need support these days, just like newspapers. So if you have some dollars to spare and would like to bring some regular entertainment into your world, I encourage you to consider a subscription to AHMM and/or its sister publication, Ellery Queen's Mystery Magazine, for yourself, a friend, and/or family member this holiday season.

If you've read "Eat, Drink, and Be Murdered," I hope you loved it. If you haven't, I hope you get the magazine and read it right away. But not before you vote. If you haven't voted yet, please do that first. Then tomorrow, go buy your local newspaper, read the election results that have come in so far, and maybe even take out a subscription to the paper. Newspapers need your support to stay afloat. Our democracy needs their spotlight to stay afloat too.

If you haven't read B.K. Stevens' most recent blog I recommend you do so now.  This is partly because it is very interesting and also because it inspired today's wisdom-dump.  I am referring specifically to the unfortunate remark the older policeman makes to the returning homeowner.

It reminded me of this scene from the classic police sitcom Barney Miller.  You want the bit that begins around 2:20.


I think it was after seeing that show that my wife and I formulated what I think of as the First Words Rule.  It states when you have to tell a friend or loved one about a bad situation that has just occurred (a car accident, a house fire, the atomic defibulator crushing the emoluments boot) the first words out of your mouth should be: Everybody's okay.  Assuming that is true, of course

Now, how does that relate to writing?  (This is a blog about writing and reading and crime, remember?)

Glad you asked.  We are looking at the difference between telling a story and telling the news.  It is natural for a storyteller to want to build up suspense, or to tell things in chronological order.  But the journalist knows that it is bad form to "bury the lede."  If you are reporting on a city council meeting and one of the members accidentally drops a bloody axe out of her purse, that's probably where you begin your piece, even if it didn't happen until New Business, way at the end of the evening.

Of course, years later when you are telling your grandchildren about your career you might want to build slowly up to the axe-drop.  But that's story-telling, not journalism.

These days fiction writers usually begin in the middle of the story, not with the journalistic lede, but as far in as they think they can go without baffling the reader.  To pick one favorite at random, here is how Earl Emerson opened Fat Tuesday:

I was trapped in a house with a lawyer, a bare-breasted woman, and a dead man.  The rattlesnake in the paper sack only complicated matters.

Not the beginning of events, but not the climax either.

You can start your story or novel wherever you see fit.  But when you're telling somebody the news, start with the most important part.

Posted by Robert Lopresti at 00:00 4 comments