The Land of Shady Habits


by Steve Liskow
I set my first mystery in Saginaw, Michigan, about 80 miles north of Detroit. While I shopped that around, I also worked on a series set in Hartford, CT, where I now live, and many people asked why my stories didn't take place in New York, Chicago, LA, or Boston. I told them there were already enough private eyes there to keep things under control. Twenty years ago, Robert Parker, Linda Barnes and Dennis Lehane all worked Boston. It's a wonder there was even a parking violation.
Rosemary Harris uses a fictionalized Southwest Connecticut and a couple of other writers have set an occasional mystery in the state (Thomas Tryon, a Hartford native, created a version of Old Wethersfield in The Other), but I don't know why we don't see more of them. The state has an energetic multi-cultural background--Irish, Italian, Polish, African, Hispanic--not even counting the original occupants. Manufacturing and the insurance industry flourished here, and the history offers truckloads of material.

So does crime. The two towns that still argue over which is the oldest one in Connecticut both have seen major foul play.

Wethersfield, on Hartford's southern border, still has a section called "Old Wethersfield," with colonial architecture, tall trees, and a cove that leads to the Connecticut River. Thomas Beadle, a merchant who contributed to the revolutionary war effort, lived along the cove with his wife and four children. When the Continental Congress devalued Connecticut scrip to 1/40 the face value to help finace the war, Beadle faced bankruptcy and disgrace. In December 1782, after months of planning and delay, he struck his wife in the head twice with an ax and cut her throat in their bedroom. He did the same to the children in their rooms, then wrote a suicide note, sat in his favorite chair with a pistol in each hand, and shot himself through the head. His act was the first mass murder in the American colonies. 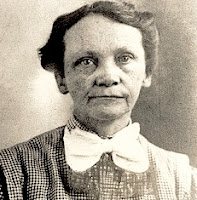 Over a century later, Amy Archer-Gilligan
ran a nursing home in Windsor, which borders the northeast corner of Hartford, only about ten miles from Wethersfield. Although she was only tried and convicted for one death, she poisoned at lest five men.

In fact, between 1907 and 1917, sixty residents of her home died, mostly from stomach ailments. 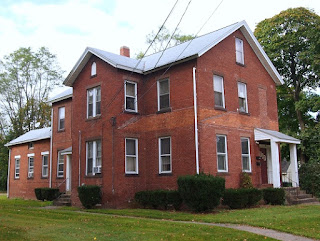 Eventually, the court declared her insane and she spent years in an asylum, dying in 1962 at the age of 93. Her story inspired the popular play Arsenic and Old Lace. If it had become a TV movie, maybe they would have called it Gilligan's Trial.

The Nutmeg State boasts (?) other ground-breaking crimes, too (pun intended). In 1957, authorities captured George Metesky, AKA "The Mad Bomber," after he had planted over thirty bombs in the preceding decade. After years in prison, he died in Waterbury at the age of 90 (Crime in Connecticut appears to be connected to longevity). His arrest came about after one of the first uses of a psychological profiler, whose description proved remarkably accurate.

Wethersfield used to be the site of Connecticut's electric chair, where Joseph "Mad Dog" Taborsky was executed in 1960 after killing at least seven people in a series of liquor store robberies. His reign of terror caused package stores to close earlier in the evening than had been customary. 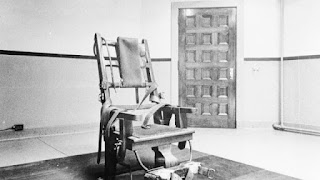 In September 1983, several Puerto Rican nationalists held up a West Hartford branch of Wells Fargo and escaped with over seven million dollars, the largest recorded haul in history at that time. By the time authorities tracked down the thieves, they'd spent most of the money on political activism.

A much darker first occurred in 1989. In Newtown, philandering airline pilot Richard Crafts went to prison for killing his wife Helle, the first time a Connecticut jury convicted a defendant for murder without the corpse being found. Prosecutors built a grisly chain of evidence about how Crafts destroyed the body, and the case is still notorious as the "Wood Chipper Murder." It may have inspired the scene in the Coen brothers film Fargo.

In 2005, Michael Ross became the first execution in Connecticut since Mad Dog Taborsky after a jury convicted him of raping and strangling at least eight women in Connecticut and New York. Ross, who looked slightly more dangerous than cotton candy, picked up most of his victims hitchhiking. 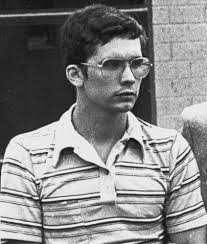 In central Connecticut, the Cheshire Home Invasion of July 2007 is still an open wound. Two career screw-up druggies battered Dr. William Petit in his home, forced his wife to withdraw money from a local bank as a ransom (The banks' surveillance video was evidence at the trial), then raped and killed Jennifer Hawke-Petit and her two daughters, aged 11 and 17. The injured Petit managed to escape and alert police, who captured the fugitives within blocks of the house, driving Petit's car. Their trial and ultimate convictions aroused a movement to bring back the death penalty, which Connecticut had rescinded after Ross's execution. The movement failed.

In August 2008, Omar Thronton, fired for stealing beer from the Hartford Distributors in Manchester, entered the building with two 9 mm semi-automatics and killed eight co-workers before turning his guns on himself.

It's disturbing to notice how these tragedies seem to come more and more quickly. The most horrific of many school shooting rampages took place in Newtown, the home of the Crafts couple I mentioned above. On December 14, 2012, mentally disturbed Adam Lanza entered Sandy Hook Elementary School and killed 20 six-year-old students, five teachers and the school's principal. He shot himself when police answered the frantic 911 call, and his mother--who bought him the guns, including an assault rifle--was found shot to death in her home. Local Senator Chris Murphe is one of Congress's strongest voices for gun control, and President Barack Obama's private visits to each of the victims' families are now local legend.

I'm closing this installment with the story that made the cover of Sports Illustrated. Even if you don't follow football, you might have heard of New England Patriots tight end Aaron Hernandez, a star athlete at Bristol Central high school (where one of my theater buddies used to teach English). Hernandez was convicted of murder in 2015. while in prison, he was tried for two more murders, but was acquitted. Five days after his acquittal, guards found him dead in his cell, apparently after hanging himself.

Yes, it's a grim list. But it gets even worse. Next time, I'll discuss a few more cases, all of which involved people I know. I even used a couple of them for stories...
Posted by Steve Liskow at 00:01 8 comments