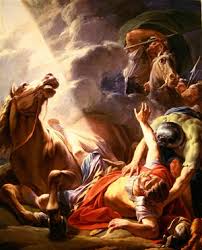 And then there's Saul.  He was guilty, at the very least, of accessory to murder (he held the coats as Stephen got lynched), and he was going to kill as many heretics as he could find.  And then Saul got knocked off his horse on the road to Damascus, and became a believer overnight, blinded and restored to sight by a miracle.  He eventually had to leave Damascus - in the middle of the night - and went to Jerusalem, with a new name - Paul - but that didn't fool anybody. The disciples didn't want anything to do with him, because they didn't believe that he had changed.  It was a big risk. They took some convincing.  So do we. So do I.  The question is, when is the risk worth taking? Is it worth taking? How do we know?
Posted by Eve Fisher at 00:01 8 comments 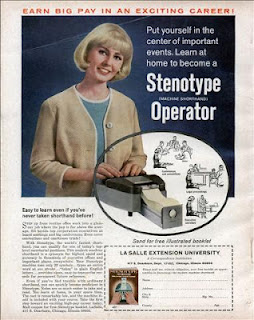 Now the court reporter is hired by the state or the federal government (depending on judge’s level); but the government doesn’t pay for the court reporters’ equipment (which costs about $4,500).  This means that while the court reporter is paid for taking down the hearing or trial in court, the actual notes technically belong to the court reporter, and he/she is paid again for actually transcribing them.  “Double-dipping!” claim the accountants.  “Pay for our equipment!” cry the court reporters.  “No way in hell!” scream the bureaucrats.   And the situation continues.  By the way, in case you're wondering, transcripts currently cost around $2.00-$2.50 a page, or $1.25 a minute of court time, whichever costs more.  A court reporter who works for an active judge can make a pretty good living.  It's the free-lancers who are often close to starving...
Let's talk for a minute about the records.  The old stenotype machines have only gone the way of the dinosaurs fairly recently.  They produced a stack of paper, about 3 inches by eternity, on which the transcript is coded; this code is in shorthand, and each court reporter had his/her own shorthand on top of that.  It could be very hard for one court reporter to read another court reporter’s notes.  (And that wasn't entirely by accident:  it's called job security.)  In the old days, the court reporter would read the paper tape and type it on a typewriter.  Then a computer.  And, finally, software was developed that could take those notes and format them into a word processing mode, but, since this requires translation from the shorthand, even this gets tricky.  For example, the words “their”, “there”, “they’re” and “the air” are all coded exactly the same.  So the court reporter has to both program the software to match his/her shorthand, and also remember what was actually said in the hearing.  Sometimes they don’t.  Sometimes they're not around because they're retired.  Sometimes they're dead.
And that's when it gets tricky.  Because not all court notes get/got transcribed right away, or soon, or at all.  Think of all the hearings and trials that are held every day in every town and city:  they don't get transcribed unless they're specifically asked for.  Joe Blow pleads guilty to a DUI and gets sentenced to, say, a year's probation and time served .  Jill Smith gets caught robbing a casino, and gets 2 years.  There's a dispute over the construction of a driveway that goes to trial.  (I remember congratulating the judge on his ability to sleep with his eyes open on that one.) There's a jury trial about a possible child abuse case, and the person is acquitted.   Or one in which they're found guilty.  The paper is there, on tape, on record - but it may or may not ever be transcribed, because the real reason for transcription is a dispute over the verdict. That doesn't always happen.  Or at least, not right away.  In my days with the circuit court, I remember seeing stacks and stacks and stacks of tapes, dated and semi-labeled, that had never been transcribed, and probably never would be.
Unless...  And what if...
Posted by Eve Fisher at 00:01 5 comments