by Robert Lopresti
This is not going to be as cohesive as (I hope) most of my pieces here are, because I have three vaguely related things I want to talk about.  And they have only a slight connection to crime or mystery.  The fact that I'm fighting a cold doesn't help.

So if you prefer to skip this and go check your email you won't hurt my feelings. If you're still with me, here goes.

A relative recently told us she had her genome tested and invited us to do the same.  This feat, which would have been the wildest science fiction a few decades ago, now costs about a hundred bucks and takes a couple of weeks.  You spit in a test tube, and wait to get an email.  Not exactly Doctor Who, is it?

And the results, I have to say, are pretty cool.  My background, as far as I know, is one-half Italian, three-eighth English, and one-eighth Irish.  The computers spotted 10% Italian, 3% British/Irish, 2% French/German, and the rest is mostly vaguely European.  There is a tantalizing 0.2% Sub-Saharan African, which I assume comes from my Italian ancestors.  (To paraphrase Pete Seeger, where do you think those Roman emperors got their curly hair?)  Oh, and I am 2.8% Neanderthal.

But more interesting, the same service tells you if you have inherited health risks that are greater or lower than average.  And that is why the Food and Drug Administration just sent them an order to cease their business.  Because, says the FDA, they were giving out medical advice, which is illegal.  I look forward to seeing how it turns out in court, but I will say this: I have a higher-than-average level of one chemical and my doctor has been trying for years to figure out why.  The computer gurus (knowing nothing about my medical test results) were able to tell me that that higher level runs in my genome.

If you want to know more about the controversy, read this and this.

Now, on to the second topic.  I am reading a fascinating and infuriating non-fiction book by Rebecca Skloot entitled THE IMMORTAL LIFE OF HENRIETTA LACKS.     Ms.  Lacks suffered from bad luck nine ways from Sunday.  She was an African-American woman born in poverty in the rural south in the early-twentieth century.  (I am not saying it is bad luck to be born African-American.  But there have been better times and places for it.)  She died of cervical cancer in 1951 at age 31.

But before she died scientists took samples of her tumor, possibly with her permission (the phrase "informed consent" hadn't even entered the medical vocabulary by that point).  Scientists had been trying for years to grow cells in test tubes, but the cells always died after a few generations.  Not so the HeLa cells (named for their original source).  They were "immortal," and could be cultured, multiplied, sent through the mail, experimented on, etc.

And so cells that began in this poor, hard-luck woman, were used to develop polio vaccines, were sent into space, and became essential parts of thousands of other studies.  (The name of that genome company I was talking about is 23andme, which refers to the 23 chromosomes in the human genome. Guess whose cells were used in figuring out that number?)  Ms. Lacks' cells were so potent that years later many other colonies of cells that were growing around the world were discovered to be contaminated with HeLa cells - even though none had been used in that laboratory. They could sneak in on a dirty test tube, or a scientist's coat.

The book, which I highly recommend, also discusses the baffled horror of Ms. Lacks' family as they discovered, decades after the fact, what had been done to parts of her body without their knowledge or permission. The conflict between the scientists and the family takes on the inevitability of Greek tragedy: there was simply no common ground for communication.  You find yourself expecting the next unintentional outrage.  When it becomes necessary to explain the concept of "genetic markers" to Ms. Lacks's widower, a man with four years of schooling, of course the scientists had it done over the phone by a researcher with a thick Chinese accent and imperfect English.  How could it have been otherwise?

Reasonable people can disagree about whether persons whose cells are used in research deserve any control or compensation. (There are more than 17,000 patents based on HeLa cells.)  But it boggles the mind that  some scientists in the early fifties thought it acceptable to secretly inject HeLa cells (highly  active cancer cells, remember) into surgery patients just to see what would happen. This went on until some physicians refused to participate, pointing out that eight doctors were hanged at Nuremberg for that sort of research.

And on that cheerful note, let's move on to my third topic.  I just finished reading NECESSARY LIES, the most recent novel by my sister, Diane Chamberlain.  You can certainly accuse me of nepotism for bringing it up here, but I think you will see the connection.  Diane's excellent book is fiction, of course, but it is firmly rooted in the Eugenics Sterilization Program, under which North Carolina sterilized 7,000 people between 1929 and 1975.  They focused on "mentally defective" epilectics, and people on welfare.  Most states with such programs gave them up after World War II (the shadow of Nuremberg, again), but the Tarheel State actually boosted theirs.

Diane's novel is set in 1960 when a brand-new social worker (after three whole days of training!) is given the job of preparing the sterilization request for a pregnant fifteen-year-old.  The idea is that the girl will wake up after giving birth with an "appendectomy scar" and never be told  she has been sterilized.

The book is not a mystery.  It is not a melodrama either: there are no cackling villains.  Everyone thinks they are doing the right thing (just like the scientists who used the HeLa cells).  And Diane is careful to include one woman who is thrilled to get the operation, since birth control was not easily available.

There are crimes and punishments in the book, but whether the crimes are what gets punished is open to interpretation.

Well, I'm going back to my sickbed.  I hope I gave you a few things to think about, anyway.
Posted by Robert Lopresti at 00:07 10 comments 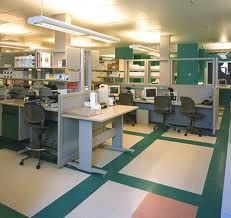 One of my many strange jobs was at a Medical Genetics Lab in the 80's.  It was your typical lab:  clean but shabby, hard-edged, hard-used.  The whole place reeked of what I called a "wrong smell" - which was basically amniotic fluid and chemicals.  Light came through glazed windows.  The samples came in bagged or bottled and sealed.  The results went out in plain brown envelopes.  The lab did buccal smears (cheek swabs) for babies, blood tests for children and adults, amniocenteses for pregnant women.

The technicians would take the samples and distill them down to that one little drop that went under the electron microscope.  The next day I’d be handed a blurry 8 1/2 by 11 photograph, full of chromosomes no naked eye could ever, would ever see, transformed into inch-long fuzzy banded crosslets, tumbled and curled and overlaying one another like sleeping puppies.  My job was to sort them out. 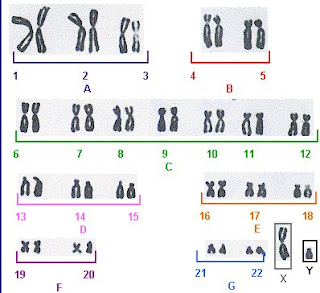 I got to know those chromosomes really well.  Me and my trusty scissors untangled 9s from 4s, 18s from 21s, and set them in neat ordered pairs for the first time in their existence.  At first, like every Other, they all looked alike to me, but time and use and my own fancy gave them personalities.  The first five sets were large and strong and unmistakable -- any flaw in them and there would have been no being to be tested.  6 through 12 were like the dancing men of Sherlock Holmes:  jaunty, poised, often with one foot kicked up in dance or play.  16 through 20 were smaller but just as playful, children learning at their parents’ knees.  13 through 15 were Hopi women, with their looped hair risen above long blankets, or nuns in banded shawls; an elemental female image.  And then the mysterious, smaller shrouded shes, 21 and 22, solid, dark, impenetrable, unpitying, even when you winced with pain, even when you cried as you found a third come to join their pair, or one so damaged that nothing good could come...


When I found a trisomy or a monosomy or any other abnormality, I took it to the lab director.  She would inspect my work carefully, assuming - usually correctly - that I had made a mistake.  But when I hadn’t, the whole lab went into panic, running and re-running the test.  When the results were certain, the phone call was made to the patient’s doctor and the sealed plain brown envelope, stuffed with test results and interpretation, was hand-delivered to the doctor’s office.  What happened next was between the patient and her doctor, her family, her God.  We knew what the options were:  we made no recommendations, rarely learned the outcomes.

The search for sex was a lot more fun.  I found the male in microcosm elusive, mainly because the Y chromosome looks nothing like a Y.  Half the time I thought it was a scrap of something else.  I started a lot of panics until I got it through my head that what looked to me like a tiny, flat-topped, spread-legged 21 was not a trisomic sister of doom, but a Y, a HE.  My only comfort, as I sat with my scissors and a worried look, was that over in the hospital, with the baby right there in front of them, they couldn’t tell either.  Parents panicking, doctors shrugging, nurses whispering, and all waiting for me (!) to find that other damn chromosome and tell them whether it was a girl or a boy.

This happened a lot more often than you might think.  Mother Nature does not always get it right, or perhaps she just has a very perverse sense of humor...