The Most Important Trait for an Established Author


by Melodie Campbell
You wrote the book. You got the publisher. You’ve won the awards. Okay, you’ve even got seventeen books and five series behind you.

What’s the most important thing you need to remain in the biz?

A much admired colleague wrote an email to me recently, in which he said, “As a writer of your experience and calibre, you must (still) feel the need to have confirmation, at times." That made me think about what it takes to survive as an author these days. And I’m not talking about a nice advance or a working spouse.

I have a post coming up in which I talk about what it takes to *become* an author. The Three Things you Need to Become an Author. But today, I want to talk about the 4th.

It’s not something you hear about often. In fact, I wouldn’t have known it until this year.  But 30 years after I won my first short story award, 200 publications later, and thirty years in the business, it’s clear to me.

You need to be versatile.

I got my start writing standup.  Mostly, I wrote for other comedians, and sold through an agent.  Then I became a newspaper humour columnist.  After that (and in addition to) I started writing short stories.  Often, I got paid $1000 a gig.

Then the short story market crashed in the 90s.  Did you hear about that?  Magazines like Good Housekeeping used to feature short stories.  Then some bright ad exec figured out they could get fiction publishers to pay to have the first chapter of a novel featured in their magazine, as an enticement for readers to buy the book.  In one move, many magazines quit paying authors like me, and started making money from them.  I was axed.

Next I tried the men’s magazines.  And yes, I wrote some pretty racy stuff for Fox and others.  (Under a different name, natch.)  That got old pretty quick.

Someone said I should be writing novels.  I started writing novels.  First, I wrote fantasy, because fantasy as a genre accepts comedy really well.  Comedy R Us, after all.  A trilogy (Rowena Through the Wall) got me featured on USA Today.

Then my publisher showed signs of collapsing.

Enter Publisher no. 2.  Would I write crime novella length books for them?  Damn right I would.  I wrote six.  (The Goddaughter series.)  Then Publisher no. 2 says, “We need a romantic comedy for the line.  Can I have your outline by April and a book by Sept.?”

I wrote the outline.  And the book.  Me, writing romantic comedy.  People liked it.  Contract came for a second.  All the while, I’m whining, “I’m a crime writer!”

Are you seeing a pattern?

Two years ago, I was signing books in my publisher’s booth at the Ontario Library Association conference.  Two male teachers came up to me and said, “Did you know your Goddaughter books are popular with the teenage boys in our high school?  Why aren’t you writing YA?”

The YA publisher for Orca Books, who happened to be standing next to me in the booth, said, “Yeah. Why aren’t you writing for me?”

And so Crime Club, the book that came out in September, is young adult crime.  And I don’t hate it.  I actually enjoyed writing for an age group I’d never tried before.

I relished the challenge.

I have come to the conclusion that the most important trait you need to survive in this business is to be versatile.  Markets change.  Tastes change.  Publishers come and go.  Fads come and go (seriously, are we done with Vampires yet?)  Even average reading ages change.  The girls who read sweet romances have all grown up and are now into domestic noir.

No, you don’t have to turn yourself into a pretzel.  You don’t have to write what you hate.  But if you want a thirty-year career as a writer, the best thing you can be is versatile.

Asked to write in a new genre?  Think of it as a plot twist.  And welcome to my very twisty writing career.

Here's that YA book!  "Scooby Doo meets the Sopranos" Canadian Mystery Reviews
CRIME CLUB - available at all the usual suspects. 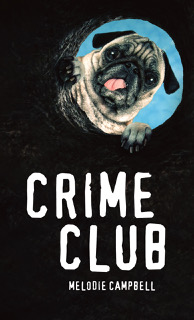 Posted by Melodie Campbell at 00:30 8 comments