Death Comes at the Beginning

This may be the earliest murder in history:  a 430,000 year old Neanderthal skull with a hole in it - yes, someone bashed him in the head with a blunt instrument: 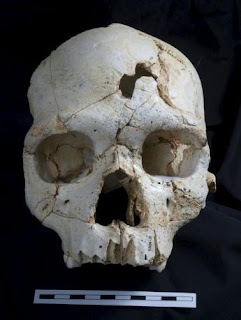 Yes, murder has been around since the dawn of time.  I've always thought it's appropriate that practically the second story in Genesis is Cain killing Abel.  But, to be fair, the above Neanderthal is about the only Paleolithic murder victim that's been found.  Perhaps it's because there were so few people that you could always move on rather than kill them.  (It's estimated that half a million years ago there were around a million homo sapiens, including Neanderthals and Denisovians, on the planet.  Now THAT'S elbow room.)  Then again, maybe we just haven't found the evidence.  After half a million years, there's not a whole lot of evidence left.

But murder certainly picked up during the Mesolithic Era (around 20,000-5,000 BCE).  First of all, by now there were perhaps 5 million humans on the planet, and they were all Cro-Magnon, i.e., us. Neanderthals and Denisovians had both gone extinct, and while there is significant evidence that we interbred (I did the genome test and am happy to report that I am 3% Neanderthal and 3.7% Denisovian), the fact that two flourishing subspecies (at least) had vanished is also a good sign that there was some serious killing going on.

And it didn't stop there.  In fact, humans got better at it.  For example:

Sometime around 12,000 BCE, in Gough's Cave in Cheddar Gorge, England, a frightening number of people were butchered to death, and then (possibly) eaten.  (Mithin, pp. 110-111)

In 2006 in Germany, a mass grave was discovered, dating back to 7,000 BCE, of 26 adults and children, all killed by arrow wounds or blows to the head. In the 1980s, a number of similar mass graves were found in Talheim, Germany, and Asparn, Austria. There were no female skeletons, which archaeologists believe prove that the women were taken captive while all the men and children were murdered.

And in a place called Skateholm, Sweden, the cemeteries from 5,000 BCE show people who fought - a lot.  Four individuals who survived depressed skull fractures (i.e., someone hit them hard enough to leave a dent); flint arrowheads embedded here or there; some who'd lost an eye or had a cheekbone/nose caved in.  And quite a few who died of their wounds.  Most of the head wounds came from "blows to the front and left side - the outcome of face-to-face combat with a right-handed opponent."  (Mithen, p. 175)

Probably the most famous murder victim of this time period was Otzi the Ice Man - found September 21, 1991, by German tourists up in the Otztai Alps (hence his name) - who lived and died some 5,300 years ago.  http://www.iceman.it/en/photo-archive
Otzi is one of the best preserved bodies ever found.  He was lactose intolerant, high levels of copper and arsenic in his hair, related to Southern Europeans, had cavities and tattoos, and wore waterproof, warm clothing of leather stuffed with grass.  His last meals were of chamois meat, red deer, and herb bread. He also had an arrowhead in his shoulder, bruises on his hands and wrists and chest, and a bad blow to the head, which is what killed him.  In other words, he was murdered.

The truth is, the catalogue of skeletal remains from Mesolithic Europe shows that up to 44% of the skulls showed signs of "trauma" (i.e., blows) (Mithin, p. 534).  For a fascinating article on how prevalent murder, war, and even cannibalism were, see British Archaeology Issue No. 52, April 2000 - http://www.archaeologyuk.org/ba/ba52/ba52feat.html

So why so much killing during the Mesolithic Era?  The Mesolithic was when the old, Paleolithic hunter-gatherer cultures were "transitioning" into agricultural societies.  The population increase was dramatic - as I said, by now there are 5 million people on the planet, and, as the transition into agriculture gets going, they are living more densely than ever before, crowded along a few fertile river valleys.  That leads to a rich possibility of reasons for murder and warfare:


And, of course, there's just good old fashioned personality conflicts.  For all we know, Otzi was a complete SOB whom everybody hated, and when they got a chance to make sure he'd never come back, well, they took it.

Now personally, I don't believe in the African Genesis theory of human origins:  I don't believe we were bred from savage carnivorous apes on the savannah.  But I do believe, as Barry Hughart put it in Bridge of Birds, that we have "a flaw in our character."  And that flaw makes it increasingly difficult, as we live in ever closer quarters, to share our toys, our food, our stuff.  A while back, AARP published a map of the "state of well-being" - and the rankings were easy to figure out once you realized that the top ten states, where people felt best about their lives, etc., were all the least-populated.  Check it out: 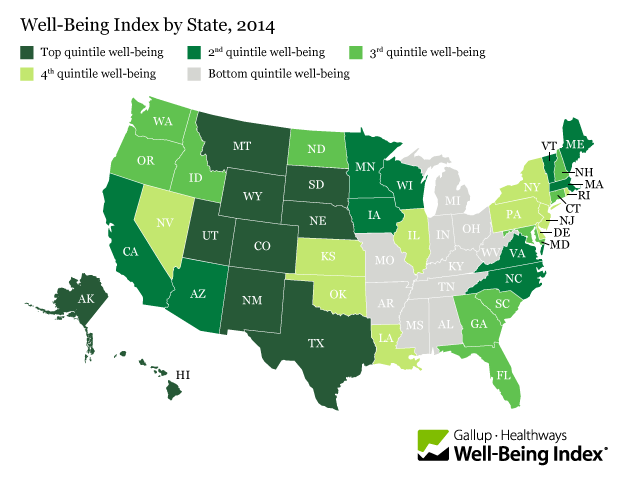 Once again, elbow room.  Of which, by the way, we've been steadily running out of since the Industrial Revolution:

Something to think about.

Meanwhile, thinking about that 430,000 year old murder victim, what on earth was the deal with that?  It certainly wasn't a lack of elbow room.  Maybe it wasn't murder, maybe it was an accident. Someone clumsy with a large rock.  Maybe it was a case of jealousy.  Or maybe he was simply the worst SOB of his day, and his cave mates decided they just couldn't stand him anymore.  But it is proof that, even if time travel is invented, there is no time to go back to where everything was peaceful, sweet, innocent of all violent death and murder.  Nostalgia isn't what it's cracked up to be.