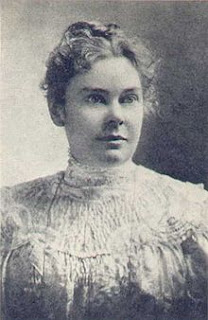 Lizzie Borden took an axe
And gave her mother forty whacks.
When she saw what she had done,
She gave her father forty-one.

Just about everyone is familiar with that iconic verse, even if they are not familiar with the infamous case from which it springs.  The average person is usually surprised to learn that the axe-wielding Lizzie was found not guilty of the murders of her father and step-mother.  Why then, those same people might ask, does that danged poem hang on so?  Good question, which unlike the case itself, has a fairly easy and clear answer--everybody thought she was guilty.  Well, maybe not everybody, but just about.  She did have her defenders during her trial, and she has a vast horde of them today.  There are many websites and books dedicated to clearing her name, just as the jury cleared her of any wrong-doing.

There are parallel cases even today: The O.J. Simpson and Casey Anthony murder cases spring to mind.  Not guilty?  Most folks don't think so and never will.  People in Lizzie's time felt the same about her.  When you know the facts of her case it is difficult to rule her out...but not impossible, hence the verdict.  Here are the facts in brief: On August 4, 1892, Andrew Borden of Fall River, Massachusetts, father of Lizzie, 32, and Emma, 41, (spinsters according to the times) arrived home from his business rounds sometime close to 10:45am to take a rest.  The weather was brutally hot and it would appear that he lay down on a settee in the living room to nap.  He would not be getting up.  The maid (Irish, of course), Bridget Sullivan, was also lying down in her room upstairs when she heard Lizzie calling her to say that her father had been killed.  She stated that this was around 11:00am.
﻿
It is worth noting, that the entire household had been down with food poisoning the previous day, which may explain the need for rest in the Borden home.  Strangely, the fear of being poisoned had arisen in the days before the murders and created such paranoia that the Bordens had had some of their food tested.  The results were negative.  Other than the fact that Andrew was not the most popular figure in town, it is not clear why or how the Borden clan arrived at their suspicions.

In any event, Andrew was indeed murdered.  The number of whacks he had received fell well short of the infamous forty-one, but were more than sufficient at ten, or eleven, having been applied to the head.  The wounds appeared to have been made with an axe.  The police were summoned.  After their arrival, darlin' Bridget went in search of her mistress, Abby Borden, whom no one else seems to have missed up to this point...and found her in the upstairs guest room.  She was in a kneeling position between the bed and the wall, her face to the floor, her skull caved in.  It was estimated that she had received nineteen blows to the back of her head by an instrument similar to, or identical with, the one used on her husband.  A search ensued for evidence.

All that was found of consequence was a hatchet with a broken handle.  This was in the basement.  There would later be conflicting testimony on whether the remainder of the handle was, or was not, discovered.  There were no blood stains evident on it.  Strangely, the police made a conscious decision not to dust the hatchet for fingerprints.  Forensics were just beginning to be used by police in the 1890's and trust in these new methods was not necessarily widespread.  Unfortunately in this case, this potentially valuable piece of evidence was left unprocessed.

On the day of the double murders, the only persons at home in the Borden household were the victims, Lizzie, and Bridget.  Emma was off visiting some friends in the country.  Lizzie would later testify that she had been out in the barn just prior to coming in and discovering her father's much-abused corpse.  According to her, there were some lead fishing sinkers stored in the loft that she wished to locate--this is Lizzie's testimony.  Bridget was supposed to be cleaning windows on that hot day, but had lain down to rest as previously mentioned.  There were no blood stains on the clothing of either woman.  Coincidentally, a few days later, Lizzie would be seen burning a relatively new blue dress in the kitchen stove.  She testified that the dress had got paint on it from some newly-painted baseboards and was ruined.  This was not the dress she had been wearing upon the arrival of the police.

That is the bare-bones of the crime scene. I'm not going to dwell on all the potentially relevant details as most are a matter of interpretation and debate, and there are a number of well-researched books on the subject available.  Instead, I will turn to a brief description of the dynamics underpinning the Borden household in the days prior to the murders: In a nutshell, no one was happy.  Abby, who was Lizzie and Emma's stepmother, was not popular with the girls, especially Lizzie.  In fact, about six years prior to the fateful day, Lizzie had quit calling her mother (she had been the mother figure in her life since the age of three) and began to refer to her as Mrs. Borden.  It is not recorded why.  Their father, Andrew, was a notorious skinflint who spent as little as possible on the home they all lived in.  In spite of the fact that they were quite well off, they had no electricity or indoor plumbing, having to dump their 'night soil' in the back yard each day.  A running dispute had arisen in recent times over the distribution of property and monies, both sisters demanding what they felt was their due.  Also, an illegitimate son of Andrew's had attempted a shake-down of the old man just days out from the tragedy.  He was not successful.  Did I mention that no one was happy?  On top of all this was the family's shared concern over poisoning.  Could it get any worse?  Yes.  According to Liz, her father beheaded all her pet pigeons that she kept in the barn.  He was concerned, it seems, that they were attracting curious neighborhood children who might cause damage or be hurt in the disused building.  Right...Murder, anyone?

So what's the upshot of all this?  Not guilty.  Lizzie was acquitted less than a year later, June 20, 1893 to be exact, after only one and half hours of deliberation.  In modern terms it's not too hard to understand why--there was virtually no physical evidence.  Circumstantial evidence is another thing altogether.  There was some of that, but the jury chose to give it scant weight.  I think she would have been given the same result if it were tried today.  Recent verdicts would seem to indicate that juries don't want the moral burden inherent in circumstantial cases.  It was also difficult for the all-male jurors of the Victorian era to envision young ladies of the proper class committing heinous crimes.  It just wasn't done.  Unthinkable.

I'm thinking it's thinkable.  How about you?  With a verdict of not guilty, the slayings remain officially unsolved, as are the Simpson and Casey murders.  That does not mean that we don't form our own opinions, whether rightly or wrongly we may never know.  It's an interesting, if ultimately futile, exercise to think of what modern investigative techniques might have been able to do with the Borden crime scene.  There has been much speculation over the years as to what really did happen August 4th, 1892, including the tantalizing theory that Lizzie committed the murders in the buff.  The picture my mind conjures of the rather formidable Lizzie (see photo) creepy-crawling through that dark, narrow-roomed, stuffy Victorian home in her birthday suit is mind-jarringly terrifying.  Can you imagine the horror of the last thing you see in this world being your naked, adult child swinging a hatchet down onto your head?

The debate over the Borden case goes on, and probably will for some time to come.  It is possible that it may yet be solved.  Patricia Cornwell, famous writer of mystery novels, as well as a forensic pathologist, claims to have solved the Ripper murders of London.  She makes this claim in her book, "Portrait Of A Killer--Jack The Ripper Case Closed," setting forth a very intelligent investigation into the available evidence and arriving at a very convincing conclusion with the use of DNA.  Certainly a surprising one for me.  Though the case she puts forth can only be tested so far, it is the most compelling one I've read.  It's well worth a look if you're interested.  Perhaps she'll move on to the Borden case.  Maybe Lizzie really is innocent, or at least, not guilty.  Who knows?  Stranger things have happened--the actress, Elizabeth Montgomery (Bewitched), who played Lizzie in a made-for-TV-film, turned out to be actually related to her.  She did not know this at the time of the filming, and it was only discovered after her death by someone doing genetic research on Lizzie.  The doctor who did the autopsies on Andrew and Abby had to be sued to return their heads.  This was only accomplished after their funerals; the heads being buried atop the caskets in separate boxes later.  I did say stranger, didn't I?

Well, what say you?  Lizzie, or nay?  It could have been the illegitimate son, though he was never considered a serious suspect at the time.  He certainly had both a beef (his unacknowledged status) and a motive (money). What about dear Bridget?  She was supposed to be washing windows, not laying about in her room.  She wasn't too happy about that assignment.  Maybe she was very unhappy about it.  The Bordens couldn't have been easy to work for, I'm thinking.  Who's to say Emma couldn't have ridden in from her friend's home and committed the murders and returned the way she came.  Especially if she was in cahoots with Lizzie, the look-out, in the barn. Was the only thing that saved Bridget the fact that she didn't rise to investigate any strange sounds in the house?  Was she asleep?  She doesn't say so.  Was she an accomplice?  It would have been instructive, perhaps, for someone to have looked into her finances after the murders.

It was a long time ago...but it could have been yesterday--we see similar crimes far too often.  What do you think?  Did Lizzie give those infamous whacks?