Evil Under The Sun– Part One


by David Dean
The following account was largely drawn from the Nassau Guardian and Freeport News of the Bahamas.  Some of the background research was done by myself and any factual errors are my own and unintentional.  I think it serves to illustrate how an insidious crime can infect and corrode an entire nation.  It is presented in two parts due to the amount of information contained.
Many years ago, November of 2003, to be exact, Robin and I took a five day vacation to Nassau in the Bahamas.  We fell instantly in love with the Caribbean atmosphere (though, technically the Bahamas lay in the Atlantic).  But as it turned out, our Friday there was a damp and drizzly one with overcast skies and that evening Robin hit the sack early.  I remained restless and turned on the television (low volume, of course) to take a look at the local news...something I tend to do whenever I travel...it can be very enlightening, and this time would prove no different.  In fact, it would open my eyes to an ongoing national tragedy that was playing out unbeknownst to the average tourist.  Not that it was a secret...far from it...but none of 'us' were paying any mind to what was happening with the locals.  My discovery was completely inadvertent.

What I found being played as the story of the day was a national prayer service.  It was being shown live and, at first, I couldn't make heads nor tails as to what had triggered this event.  As I continued to sip my rum and decipher the accents it became slowly apparent to me from the various speakers (ministers, government officials, private citizens) that somehow six boys had been killed in a terrible tragedy.  It was obvious that the Bahamian audience were well aware of the circumstances, while I watched bewildered as to what had actually occurred: I envisioned some sort of boating accident, actually.  It was a depressing and sad affair, and I eventually turned it off and went to bed, thinking of my own children and what a fragile gift life is.

The next morning I paid a visit to the hotel gift shop and bought the local paper: The Nassau Guardian.  The entire affair was front page news.  I began to read expecting to be find out what kind of accident this might have been, only to discover that the deaths were not accidental at all...

Young boys began to go missing on Grand Bahama Island (the most populous of the Bahamas archipelago; second only to New Providence Island where the capital, Nassau, is located) in May of 2003.  One followed the other into oblivion in rapid succession--Jake Grant, 12, May 9, Mackinson Colas, 11, May 16, and Deangelo McKenzie, 13, on May 27th.  Each had been in his own neighborhood amongst familiar surroundings.  None had a history of delinquency; just the opposite, in fact.  Attempts at locating the boys were fruitless and yielded no clues as the circumstances of their disappearances.  Police resources from national headquarters were brought in to assist the local officers.  Rumors quickly became rampant and the police warned the public to avoid indulging in speculation or providing tips based on  homegrown theories.  This did not work and the police found themselves deluged with useless lines of inquiry.  Their resources were rapidly maxed out.  Fissures began to show between the police, the citizens, and the government.
﻿
﻿On June 19th the Police Press Liaison Officer, Superintendent Hulan Hanna, said that even though the search has spanned nationwide, the police would continue to treat the case as one of "search and rescue," rather than "search and recovery," and that they had no reason, as of yet, to consider the boys as anything other than missing.  He went on to add that he was "concerned" after visiting Grand Bahama and seeing so many children out on the streets late into the evening, and appealed to the parents to take primary responsibility for the safety of their children.  Additional personnel from the Defense Force (the Bahamian armed forces) and from citizen volunteers failed to produce any results.  K-9 units fared no better.  It seemed the boys had simply vanished into thin air.  A reward of $25,000 was offered and grew to $75,000 within weeks--a sizable amount of money to the average Bahamian.  But no one had actually seen or heard anything useful and it went unclaimed.

On July 7th, members of the National Committee for the Prevention of Child Abuse weighed in expressing their concern and horror over the circumstances and likening it to events in the U.S.  "This is something that happens in the U.S. and it is something that we see on the television in the U.S.  It is something that we have not associated with our country," said Dr. Sandra Dean-Patterson during a press conference at the Ministry of Social Services.  The spectre of foreign influences began to play a larger and more malevolent role in the Bahamian psyche.  Like Supt. Hanna, she also expressed concern over children wandering the streets unsupervised by adults; even approaching strangers (tourists) at the Straw Market to get them to buy things.  Clearly the public had moved on from the "search and rescue" mentality that the police maintained.  On July 10th, the Commonwealth of the Bahamas celebrated its 30th year of independence from British rule under a pall of apprehension.

On July 14th, a disturbing story by staff reporter Jimenita Swain appeared in the Nassau Guardian.  It had to do with two separate incidents of boys gone missing from Grand Bahama Island: the current crop, of course, but also three boys that had vanished twenty-two years earlier; also in May, and all of a similar age.  However, in the older case all three boys had disappeared on a single afternoon!  According to the sister of one of the earlier missing boys, the police had told her family that they could not search until twenty-four hours had elapsed.  Three days later the clothes and school books of the boys were found on a remote beach near a 'blue hole'--essentially a deep hole in the ocean's bottom; a sort of vertical marine cavern.  The police ended the search and pronounced the boys dead.  Memorial services were held. 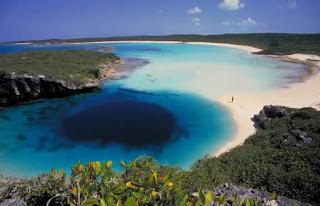 Twenty-two years later, the same woman, Nicole Lewis, brother of George 'Kip' Lewis, noticed something strange--Mackinson Colas bore a striking resemblance to one of the earlier trio, Jake Grant.  A meeting between her and Jake's sister spawned a theory about what might have happened to their brothers so many years before and the ones gone missing in 2003.  Ms. Lewis based her theory on a book entitled "Devil's Knot" which recounted the story of three missing boys from West Memphis who were discovered to have been drained of blood and one of them mutilated.  Three people were arrested and convicted for the crimes.  It was believed they acted out a satanic ritual as the method of the boys murders.  The deed had been done in May around the time of the full moon and the victims had also been three young boys.  The Bahamian police discounted the theory.  The public, however, was thinking it over.

On July 29th, the mother of an eleven-year-old boy filed a missing persons report with the police--Junior Reme had joined the ranks of the vanished children of Grand Bahama Island.  His mother had last seen him at 9:30 in the morning when he had asked for four dollars for snacks at a movie.  She had refused and last saw him watching television.  She left the room for a moment and when she had returned, he was gone.  When he failed to return after dark she had visited the Freeport grocery store where he worked as a packer but he had not been seen there either.  Unlike the other boys, Junior was a Haitian national; his family recent immigrants from that beleaguered island.

In mid-August, the Royal Bahamian Police Force reached out to the FBI for help and assistance with the on-going cases and a team was dispatched by Washington.  It consisted of a Supervisory Special Agent, a Miami Liaison officer for the Bahamas, and two profilers.  They met with their Bahamian counterparts and gathered the meager facts available.  A sense of relief spread through the islands at the notion of such experienced and well-resourced officers being brought to bear on the mystery. But when they departed a few weeks later all that the local constabulary was left with was that their case was "unique"--there was no evidence to evaluate; no suspects to interrogate; not even a person of interest to interview.  After nearly four months all that had been learned was this: Each of the boys had lived within a mile and a half radius of the other and played and congregated in the same neighborhood.  Two had attended the same school and they were all around the same age.  All four of the missing children had last been seen by their mothers, were active basketball players, and packed groceries at the same Winn Dixie grocery store in Freeport.

It was not over.