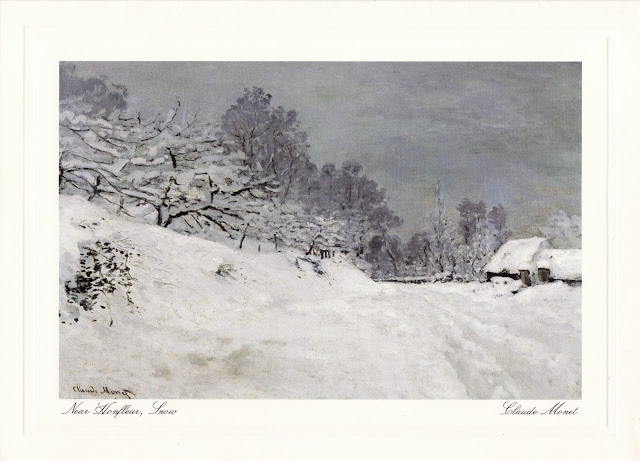 I have chosen this winter scene to begin with, because I am nothing if not obvious, but also for two other - interconnected - reasons. The first is that it was painted by Claude Monet about 130 years ago and about 10 miles from where I live in Normandy. I know this road near Honfleur and it hasn't changed that much. Today, you'd be likely to see an abandoned Renault Five in the foreground and - given the season - a UPS truck fighting its way up the road. Seriously, do we really entrust our precious, fragile belongings to a carrier whose name looks suspiciously like Oops!?

The second reason is that as, you can just perhaps see, it is a Christmas card. More pertinently, it is a card I received some years ago from Dell Magazines. Within are kind messages from Janet and Linda. It is a seasonal and constant reminder of how lucky I have been. Without the help of those redoutable ladies, I wouldn't be here now.
So a painting by Monet finds its way onto a Christmas card which in turn finds its way back to where it was painted. Is that synchronicity or co-incidence? Or simply a proof of the interconnectedness of all things? Whichever it is, it still pleases me.
Christmas is now ten days away, and grizzled and grumpy though I may have become, I still feel that same anticipatory prickling in the soles of my feet as the 25th approaches.

France is another country and they do things differently there. For instance, the celebration and heavyweight eating happen on Christmas Eve. Turkey is becoming more and more popular but the dish of choice has always been a leg of lamb - the Christmas gigot. So since living in France, I have had to change my habits a bit. For example, the Queen's speech on Christmas Day is not the same here. For one thing, the President of France speaks very little English. Perhaps that's because he is very little.

One habit I have never changed, and never will. What I shall be doing on Christmas Eve afternoon, is listening to the Nine Lessons and Carols  from King's College Chapel in Cambridge. And this via BBC Radio. Phew, made it.
Radio is what I really wanted to talk about. I am a radio man, and always have been. Very often, I prefer it to television. As that legendary small boy once said, "On radio, the pictures are better." And in the BBC's case, the small boy was right on the money.
The BBC - or "the Beeb" as we sometimes call it, or "Auntie" as we used to call it, has many different stations, both television and radio. I want to tell you about Radio 4 which is the station of the spoken word, or more particularly about Radio 4 Extra, its offspring, which is devoted to comedy and drama. Especially drama, and readings.
Here are some of the things I have listened to in the past several months on Radio 4 Extra. This is not an exhaustive list.
I have also heard two  excellent series of short stories called 'Pulp Fiction' which included 'A Candle for a Bag Lady' (Lawrence Block), 'Forever After' (Jim Thompson) 'A Really Nice Guy'(William F Nolan) and 'So Fair, SoYoung, So Dead(John Lutz) All read by Peter Marinker who is a superbly talented American reader. I have more recently been listening to short stories by Bradbury and Colin Dexter.

Dear oh dear, how I am wittering  on. I know a list would lead to trouble.
What I really wanted to say to you is that you can dip into this trove anytime on

Its extremely easy to find your way through the site. Just bring up the day's schedule, click on whatever takes your fancy and the player will pop up. (I think you will have to download the player but that's easy; the guidance is excellent)
If you're a born listener like me and like to read with your ears, I'm sure you'll find something to suit your criminous tastes.

So that, my beloved 'earers, is my Christmas present to you. If you already knew all about it, then pass it on to a friend.
That's the end of the radio commercial. We're handing you back now to your regular programme schedule.

And a very, very happy Christmas to all of you.
Posted by Neil Schofield at 00:01 3 comments