A number of my fellow SleuthSayers regularly contribute pieces based on history, and I usually find them intensely interesting.  Eve Fisher has done some wonderful pieces, as have David Edgerly Gates, R.T. Lawton, and others.  I've taken a stab at a few myself.  I like history, especially American, English, Native American, and when it's not too turgid, Catholic history.

A few years ago my wife, Robin, gave me a very slim book entitled, "A Journey Into Mohawk And Oneida Country 1634-1635."  It was not so much a history (at least it was not intended to be so) as a journal of a Dutch surgeon/barber sent with two merchants to renegotiate a trade agreement with the Iroquois.  All three were employee/colonists for the Dutch West India Company and living at an outpost known as Fort Orange near present day Albany, New York.  It appeared that the impetus for this dangerous task was French interference in the lucrative beaver pelt trade.  They threatened to undercut their Dutch rivals with their Algonquian alliances, so an adjustment was needed from the Iroquois in order for the guild to continue to prosper.  All pretty cut and dry, and to be honest, the author, while diligent, was not putting together a future best-seller here.  Nonetheless, I was very excited to have, and anxious to read, the little volume simply because it was a rare, and very early, first-hand account of life among the Mohawk and Oneida.

But where's the mystery, you may be asking yourself?  To begin with the author was the mystery.  The man attributed to writing this brief record never identifies himself within its pages.  It was a journal, after all, which he was keeping for the company records.  He probably just assumed that the audience he was writing for would know who had written it.  After all there were only three of them, and they had been commissioned by the Company.  His two companions are identified within its pages.  However, for the historians, it would take over two hundred years for the author's identity to be revealed.

This began with the fortunate discovery of the document itself in 1895; stored in a forgotten archive in Holland.  It was one of the very few Dutch West India Company records to have escaped the great purge that was accomplished when that institution was dissolved hundreds of years before.  Its discoverer was an American, who recognized its worth, bought it, and brought it back to the States.  It would take additional minds and decades before a list of possible authors was made up based on colonial census records and passenger lists from Holland.  In the end, it was narrowed down to a young man in his early twenties who recorded his profession as surgeon/barber when he boarded a vessel for the colonies.  His name was Harmen Meyndertsz van den Bogaert and bound for New Amsterdam.  He was the right age, at the right time, practicing the right profession, and headed for the right place.  There were no others that fit that bill so exactly.  Once identified, his name was found numerous times throughout the colony's transactions and history during the 1600's.  He was to prosper in the New World and grow into a much respected figure.  He would not die that way.

Bogaert's selection for this dangerous, but important, assignment gives us some indication that he was well thought of and trusted after only a few years in the colony.  His being a surgeon (read blood-letter, and first aid practitioner) was, no doubt, a part in their decision-making process.  There must have been a feeling of great urgency in this matter, as well, as the intrepid three were being sent forth just days from Christmas during an intensely cold winter.  Wearing clothing and footwear totally unsuitable for the journey ahead, they followed their Indian guide out of the village and onto barely discernible trails knee-deep in snow with drifts sometimes chest-high.  Their all-day treks were measured in mere miles; often traveling no more that two or three in a day.  During all this Bogaert makes entries in his journal that are both brief and laconic.  In their first encounter with the natives, they chance upon and surprise a group who throw down their packs and flee into the trees upon seeing the white men.  The Dutchmen and their guide then proceed to help themselves to any food that they can find among the Indians' discarded goods, while the owners watch them from the shadows.  The natives make no move to stop, or molest them, and the trade party moves on.  Bogaert makes no further comment on this episode.

When they reach the first village of a chain they must visit, they are greeted warmly.  It is never expressed in Bogaert's diary, but one gets the impression that the Mohawk chiefs had been apprised in advance of their arrival and were expecting them; knew their purpose.  Brought into longhouses containing as many as forty occupants, the exhausted travelers are given a place by one of the many fires.  Bogaert and his men are wet and frozen.  They are fed bear and beaver meat.  Bogaert never offers his opinion of this fare, but it is apparent that he eats it readily.  They do some trading, sleep, and move on the next day with a new guide to the next village.  These actions are repeated throughout their adventure, with only chance observations of how their hosts lived; their customs.  He writes once of a chief showing him the tribe's "god," a stuffed marten with protruding teeth, decorated with beads and feathers.  In another example he records, with chilling understatement, that one of the braves they are bedding down with for the night wishes to cut him.  They arise the following day and move on with no further mention of the threat, or how they spent their night.  The writer in me couldn't help but wonder--did they sleep?  Did they ask for the chief's intervention and protection?  Was there any trouble that night, or did the threat turn out to be completely baseless?  And what was the warrior's motivation in this instance?  Had he been offended, or was he just curious to see if the Dutch bled the same color as the Iroquois?  Maddening little details.

On another occasion they are treated to a curing ceremony conducted by two of the tribe's shaman.  Inside a small bark-covered longhouse filled with smoke from a roaring fire, the two sweating elders put sticks down their throats and projectile vomit onto the hapless patient, a young man laid low with fever.  Again, our hero offers little enlightenment.  Being a surgeon, had he asked to witness one of their healing ceremonies?  Was the patient cured?  What were his, and his companions, reactions to this extraordinary display?  Silence.

As to his own doctoring abilities we are given only a glimpse.  When one of his companion's legs begins to swell, he records cutting it three times with his knife and dressing it with bear grease.  We can only assume that the result was salutary, as they all continue their travels shortly thereafter.

We are left to infer that the Mohawk and Oneida are lacking firearms at this date, as Bogaert makes no mention of them, but records their fascination with the European's guns.  Though on two occasions the trio is entreated by entire villages to discharge the weapons into the air, they steadfastly refuse to do so.  Bogaert writes of their disappointment, as the Indians are well aware of the fire and thunder the guns produce and are excited to witness it, but again frustrates the reader as to the reason for the refusals.  One can only guess that the Dutchmen were loathe to empty their one-shot weapons and become helpless to defend themselves.  Perhaps this was the Iroquois' secret intent, or our pilgrims feared it might be.  After all, there had been that troubling earlier instance with the warrior and his knife.

Yet, at the end of Bogaert's brief journal the adventurer-merchants return unharmed to their colony.  Perhaps due to the success of their efforts, Bogaert himself becomes a respected trading merchant in the coming years, and prosperous enough to buy part ownership of the privateer vessel, La Garce, and uses it to prey on Spanish shipping in the West Indies.  At twenty-nine, he marries a woman living in the colony and they have four children over the next several years.  He continues to gain both wealth and stature within the hard-working community.  Then, at age thirty-six, he is charged with sodomy and flees the colony for the relative safety of the Mohawks he had visited years before.  Just like that, everything changes. 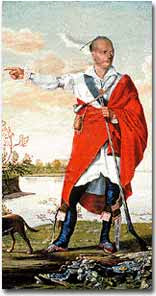 Van den Bogaert stood accused of having sexual relations with a black male servant in his employ named Tobias.  The servant was captured while Bogaert remained at large amongst the Native Americans.  Undaunted, it seems, the colony appointed a man-catcher to go after him and bring Bogaert out of Indian country.  Whether this was a difficult undertaking, or not, is never explained, only that his capture results.  On the return trek, Bogaert manages to escape once more, and in his desperation, attempts to flee across a frozen river.  Unable to support his weight, the ice gives way and he plunges into the frigid waters and perishes.  It is not recorded if his body was ever recovered, or if an attempt was made to do so.

Likewise, we never learn of Bogaert's own feelings about the events he participated in during his extraordinary travels among the Iroquois.  He never once expresses his own feelings and impressions in his terse, business-like journal.  The historians responsible for researching his time among the Iroquoian peoples wisely refrain from interpreting his writings to conform with modern opinions and prejudices.  The scant, and ultimately startling, events comprising the biographic introduction to the piece are, likewise, left to tell their own tale without interpretation or embellishment.  We know what happened, but not why.  There are so many unanswered questions that I find it tempting to fill in the blanks.  Clearly, this was a capable and complex man.  Ultimately, we know what he did, but not who he really was, and it is difficult not to assign him modern motives and thinking.  But that wouldn't actually be the truth, would it?  We so seldom know what our own contemporaries really think and feel; even when they do express themselves freely and often.  So, in the end, Herr Bogaert forms the juncture of both history and mystery, revealed in his actions and writing, but still shrouded in the mystery of human behavior--an intriguing, but frustrating, cipher.
Posted by David Dean at 00:01 9 comments