Have a Holly Jolly Crime Season


by Paul D. Marks
Since Christmas is a couple+ days off and New Years a week or so away, but as we’re in the middle of the holiday season, I thought I’d try to find some appropriate movies and books for the season. And though I wrote this over a week ago it seems that great minds think alike as Eve also did a post on holiday movies. Luckily there’s really not any crossover in our choices.

Mine are appropriate for people who are into crime for whatever demented reasons we are. So, much as I love Miracle on 34th Street, The Shop Around the Corner, It’s a Wonderful Life, A Christmas Story and others—and by the way, that’s my way of getting these non-crime holiday movies that I like mentioned here—the focus here will be on holiday movies/books with a crime element. Though I will exclude horror and stick to mystery and thriller.

So, without further ado: 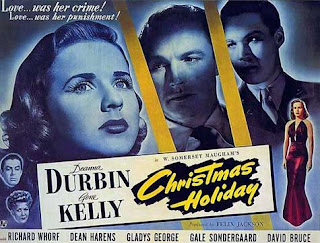 Christmas Holiday – Deanna Durbin is a torch singer in a dive club. There’s violence and insanity. And Southern gents—nasty Southern gents. Prison breaks and Murder. And murder cover-ups. So I ask you, what the hell more do you want in a Christmas movie? Based on a novel by W. Somerset Maugham of all people. And directed by Robert Siodmak, one of noir’s iconic directors. Maugham and Siodmak, a match made in......Hollyweird. 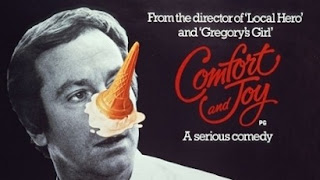 Comfort & Joy – My wife’s favorite on this list. In fact, she made me add it at gunpoint. A 1984 Scottish movie about a radio DJ who gets stuck in the middle of a feud between rival ice cream trucks. The grisly carnage of melted ice cream on velour upholstery is not for the faint of heart. 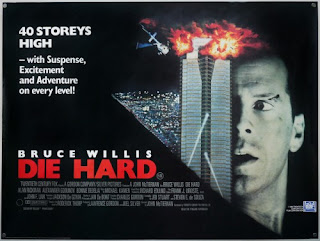 Die Hard – There’s a Christmas party happening in the Nakatomi Building in LA (incidentally not too far from where I lived when the real building was going up and I could see its progress every day).  Everybody’s happy! Until some guy named Hans Gruber—you know he’s a bad guy with a name like that—spoils everybody’s fun, taking them all hostage. Luckily, there’s a barefoot Bruce Willis in the head ready to save the day. So Let it snow, let it snow, let it snow—of course, in LA when you say that you might not be talking about condensed water... 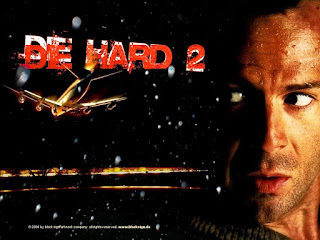 Die Hard 2 – “Another basement, another elevator...how can the same thing happen to the same guy twice?” asks Bruce Willis’ John McClane in the first of 739 sequels to Die Hard. (Don’t get me wrong, I like ’em...except for that last horrid thing set in Russia, and maybe that’s the real crime here re: the Die Hard movies.) It’s Christmas Eve, Bruce is waiting for his wife (Bonnie Bedelia) at Dulles Airport in DC. Franco Nero arrives around the same time, a South American drug dealer being brought here to stand trial. But the bad guys have other plans for him. Not a creature was stirring, not even a louse, ’cause what they didn’t know was that John Mclane was in the house. So Happy Christmas to all, and to all a good night! 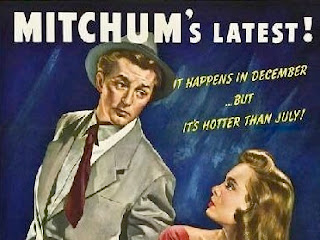 Holiday Affair – Robert Mitchum gets Janet Leigh fired from her job in a department store. Hilarity ensues. Maybe not really a crime story, but since Mitchum is the cause of Leigh’s losing her job, we’ll call that a crime and let it squeak by. Besides, who’s a bigger iconic noir actor than Mitchum—that’s enough to let it qualify. 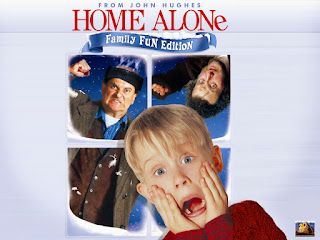 Home Alone – Cuter than beans Macaulay Culkin gets left behind by his oblivious family when they go on vacation. Hey, that’s nasty stuff. And there’s burglars (hence crime) in the form of Joe Pesci and Daniel Stern. And if you’ve seen Goodfellas you know what a nasty SOB Pesci is. So we’re good here for a crime Christmas movie. And it’s directed by Chris Columbus and, if you listen to some people, you know that Mr. Columbus is the cause of all the problems in the New World. Crime, baby! 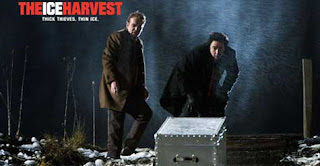 Ice Harvest – John Cusack, Billy Bob Thornton, Randy Quaid. From a book by Scott Phillips.  Christmas Eve. Wichita, Kansas. A mob lawyer, a pornographer and a mob boss (walk into a bar...). What the hell more do you want in a Christmas movie? 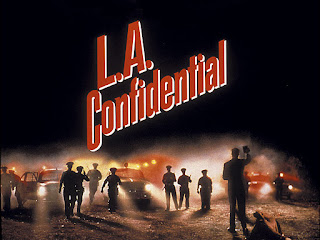 LA Confidential – Hey peeps, on the lowdown, who do you think of when you think of Christmas? Bethlehem? Hell no! Santa Claus, you nuts? James Ellroy of course. It’s Christmas time. Bud White (Russell Crowe) is beating up a wife abuser. The cops are having a Christmas party in the station. They decide to beat up some Mexicans. It’s Bloody Christmas. But keep it quiet, friends, off the record, on the QT, and very hush-hush. So what is your valediction, boyo? Kevin Spacey’s is Rollo Tomasi. Mine is just Rolos. 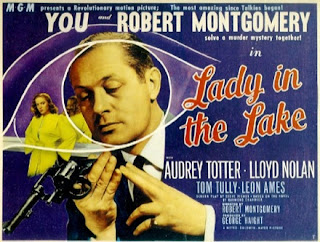 Lady in the Lake – On Christmas Eve, Philip Marlowe wants to publish his mystery stories, but the publisher wants to hire him as a detective instead, can’t imagine why. But we here all know that’s just a way of saying go jump in the lake (and maybe you’ll find the lady in there), we’re not interested, like saying “we love it, but it’s just not right for us at this time” and “good luck with it elsewhere”. Robert Montgomery directs and stars as Philip Marlowe in this experimental (photography-wise) version of Chandler’s book. The subjective cinematography is interesting but wears after a while. 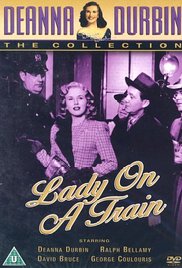 Lady On a Train – Nikki Collins (Deanna Durbin again) is on a train heading for New York at Christmas. Reading a mystery book. She looks out the window to see a man in another window getting clomped on the head. But no one will believe her. Think Rear Window on steel wheels. And from there the plot thickens into a nice roux of murder and mystery with Ralph Bellamy, David Bruce, Edward Everett Horton and Dan Duryea. It’s more fun than a barrell full of gunpowder. And anything with Dan Duryea is worth watching. And Deanna’s not too bad either. 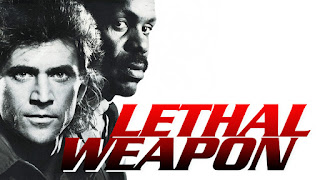 Lethal Weapon – Mel Gibson beating up bad guys, doing his Three Stooges Routine, getting drunk and blessing out an LA Sheriff’s deputy with every expletive and racial slur he can think of in his drunken state—oh wait, that last bit was real life. But Lethal takes place during the Christmas season and even has a clip from the Alastair Sim version of A Christmas Carol on a TV in the movie and some Christmas songs. Yup, it qualifies. 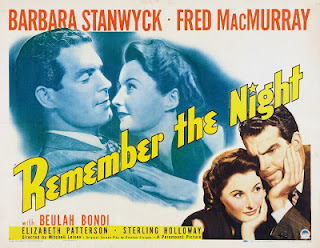 Remember the Night – Barbara Stanwyck. Fred MacMurray. Black and white photography. Crime. A 1940s flick. You’re thinking Double Indemnity, aren’t you? Nope! This flick came a few years before. Stanwyck is a shoplifter, arrested right before Christmas. MacMurray is the DA prosecuting her, but he feels sorry for her and takes her home to his family for the holidays. Fun ensues. 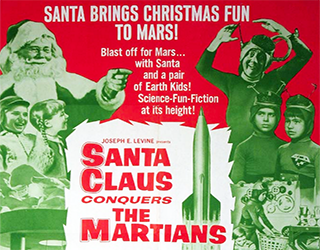 And last and maybe least Santa Claus Conquers the Martians – well, the crime here is that this movie exists at all. Though my wife does have fond memories of it from when she was a kid. Go figure kids’ tastes... If you like cheesy sleazy with terrific production values (is my nose growing?) this is the movie for you.

And now for some favorite movies set during the holiday season, even if they don’t have crimes in them:

Can’t Buy Me Love (Well, it’s partially set during the holiday season and it’s my list so I can do what I want!)
Christmas Story, A
Christmas Carol, A, in its many forms
It’s a Wonderful Life
Miracle on 34th Street – my personal fave, followed by the one below:
Shop Around the Corner

I’m sure I’ve left some of your faves out, so make your own damn list and check it twice.

I was going to try to pick out a handful of Christmas murder mysteries. But the list is long and I came across Janet Rudolph’s lists of holiday mysteries. She collected a more complete list than I ever could. So I thought instead of my compiling a few titles, I’d give links to Janet’s comprehensive lists:


And my wish list for Santa (’cause I'm pretty sure he reads this blog):

AND HAPPY HOLIDAYS TO EVERYONE!

And speaking of Christmas, how 'bout picking up a copy of Vortex, White Heat, LA Late @ Night or Coast to Coast: Murder from Sea to Shining Sea – hey, don’t blame me, I didn’t invent commercialism at the holidays. Or signing up for my newsletter.