An uncertain year, 2019, but a lot of good books came out. Plenty of brand names, Bob Crais and John leCarre, Alan Furst and Steve Hunter. Here's a completely arbitrary list of my own.

Laura Lippman, Lady in the Lake.
A smart, tart, penetrating story about race and class, memory and regret, self-absorption, self-awareness, and the limits of transparency. 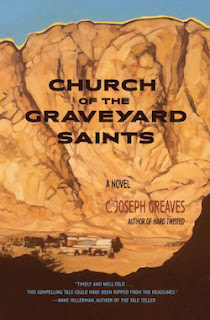 Chuck Greaves, Church of the Graveyard Saints.
If not exactly an eco-thriller, at least second cousin to Edward Abbey. A completely Western novel, and a meditation on how landscape inhabits us.

Lara Prescott, The Secrets We Kept.
Irresistible. A spy story, a history, a corrective to romance. The deep moans round with many voices. A book of echoes, unspoken sorrows, hope.

Don Winslow, The Border.
A fierce, furious, savage novel, a wounded lion dragging himself through a desolate waste, failing in everything but nerve. An absolute shocker. 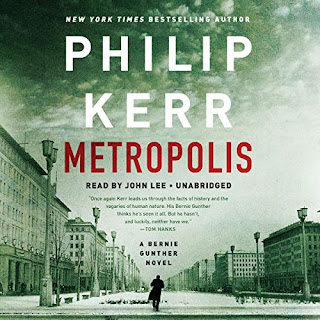 Philip Kerr, Metropolis.
Bernie Gunther takes his curtain call. A look behind, the uncertain shadows before, a sense of irredeemable loss, and the hinges of horror creaking open under his feet.

A couple of books that weren't new this past year, but that I came on late. Mick Herron's Slow Horses and John Lawton's Black Out, both exemplars of why to start a series at the beginning. I also stumbled across Val McDermid's Forensics (2014), which is utterly indispensable, I kid you not. 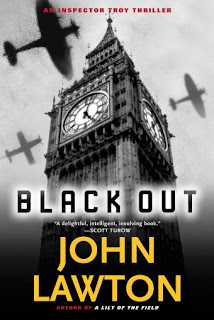 Speaking of which, there was still nothing to beat the austere and windswept Shetland, all gorse and moody weather, or the sturdy and engaging Douglas Henshall as Jimmy Perez. 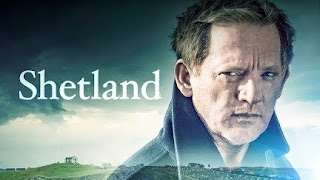 And best picture? Once Upon a Time in Hollywood. (I know, I don't like him either, but fair is fair.)
Posted by David Edgerley Gates at 00:00 4 comments 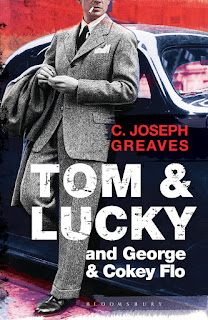 In early 1936, the racket-busting New York prosecutor Tom Dewey went after the Mafia crime boss Lucky Luciano. They convicted him, and Luciano drew thirty to fifty. Ten years later, his sentence was commuted and Luciano was deported. Luciano's lawyer in the 1936 trial is a guy named George Morton Levy, not mobbed up by any means, but a regular Joe and a straight arrow. His legal notes, from a long and storied career, have gone unexamined since his death. The writer Chuck Greaves - a former lawyer himself - got access to Levy's papers. And thereby hangs a tale.

Tom & Lucky is, you guessed it, about you-know-who. Not to mention George Levy and a soiled dove called Cokey Flo Brown. Each of them gets a turn at bat, the novel told in multiple POV, winding the clock. The book's third act is the showdown in court, which is hotter than a matchhead. Hot enough, as Cokey Flo puts it, in a somewhat different context, that the people in the adjoining rooms could light up cigarettes.

Wait a moment, and savor that turn of phrase. The voices in Tom & Lucky are nothing if not engaging.  Cokey Flo tells her own story, first-person, third person for Dewey, Luciano, and George. That omniscient third is different for each of them, Dewey's reserved, a little chilly, even, Luciano's more interior, but not inviting (he's a moral leper and a psychopath, after all), and George's, finally, one that shares confidences, along with his humanity. Levy is the center of gravity, here. And regarding the voices, or the collective voice of the book, the effect is specific and immersive, a particular time and place.

Not that this is easy to do. In fact, the opposite. It's easy to trip yourself up. Inhabiting the past is tricky. Too much effort, and it shows. The smell of the lamp. You want to bait your hook with the evocative detail, but almost an afterthought, seemingly accidental, something thrown up by the context, yeast working in the dough. The casual aside, overheard, the careless glance. The other device in Tom & Lucky is the use of pulp conventions, again without breaking a sweat. Not just for momentum, or atmospherics - although they happen to work that way, too - but because they're familiar landmarks. Like compass points, they help orient us, both to the period and to the principal relationships. Everything's a transaction. It's about leverage and opportunity, palms and grease.

That said, Tom & Lucky is actually sort of counter-generic. The material is pulpy, the tabloid headlines at the time wrote themselves. Nor can you do a book about this kind of thing without getting into the down and dirty - and of course enjoying it. It's too juicy. George Levy gets his shot at defending Lucky? He'd be crazy not to. Nobody stays home on this one. At the same time, as sensational as all of it is, you don't have to add extra relish. Lurid is as lurid does. For my money, the real trick Chuck Greaves pulls off is that he reimagines the whole event, and doesn't take any cheap shortcuts. The tension is all in the telling. The people sound and seem entirely genuine, to the circumstances. They're not caricature. They're not noir tropes, or conveniences. They're immediately recognizable, their weaknesses, their heroics, their ambitions, their folly. They're in their native element, fully fleshed, and not as if they're posing on the horizon line of history, looking over their shoulder.

Chuck Greaves is published by Bloomsbury and by St. Martins's. The paperback edition of Tom & Lucky (and George & Cokey Flo) comes out April 11th, 2017.
http://chuckgreaves.com/


THE LAST HEIR is the third in Chuck Greaves' series of legal thrillers that began with HUSH MONEY and GREEN-EYED LADY. The hero of the books, Jack MacTaggart, is of course a lawyer, but he's neither a bottom-feeder - a skip-tracer or an ambulance-chaser - nor is he Atticus Finch. He's not above mischief, on the one hand, and his ethics can be relative, shall we say, but he sometimes disappoints his clients when he turns out to have more principles than they expect him to. He's a stand-up guy in a tilting world. 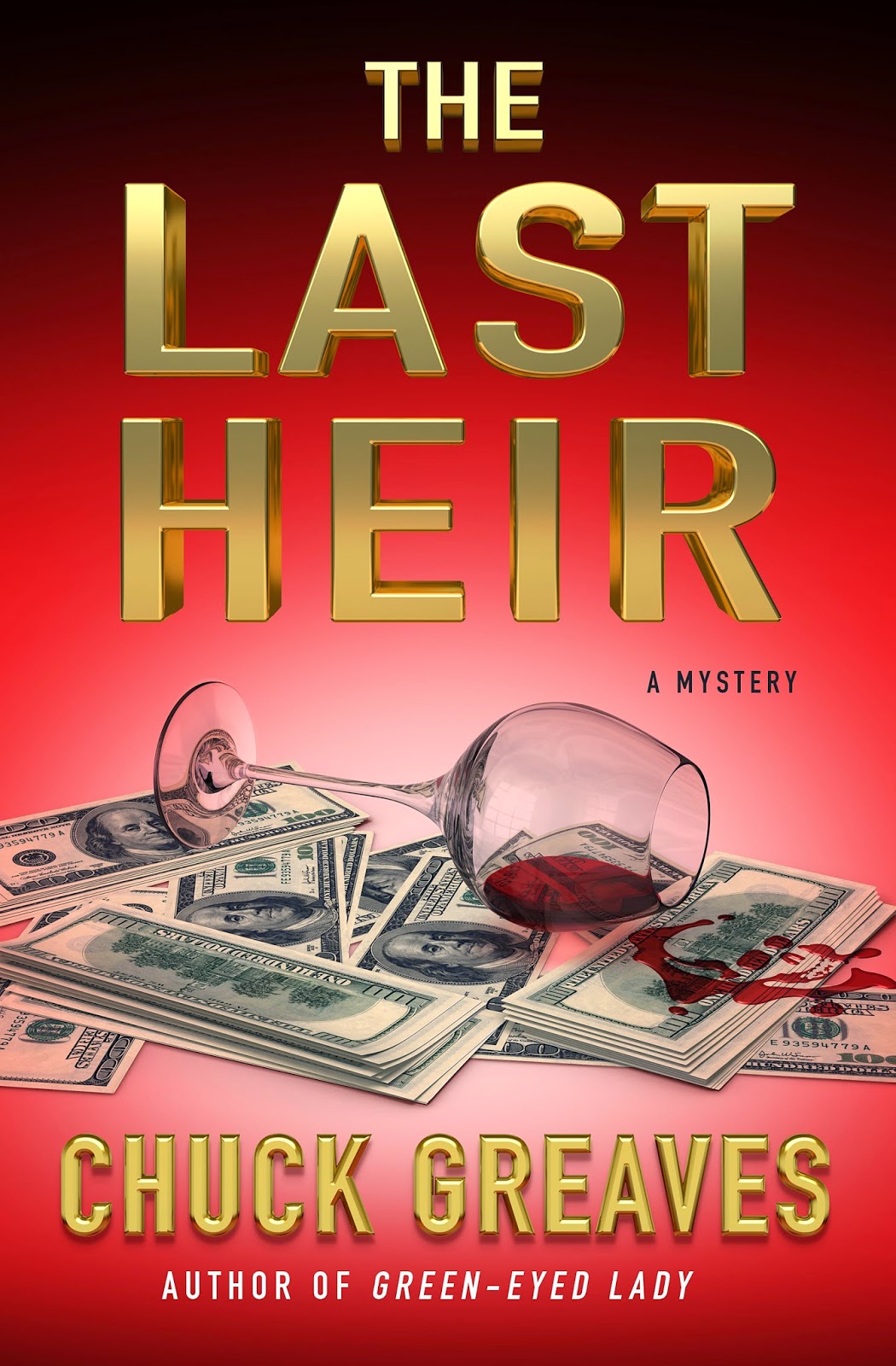 THE LAST HEIR is, at least on the surface, about a power struggle in a California wine-making family. (Think, say, the Mondavi clan.) The aging pere, Philippe, has three kids, two boys and a girl. The older son has disappeared and been declared legally dead. The next in line drowns in a wine vat. And the daughter can't inherit, because her dad, a stiff and unyielding control freak, won't leave the estate to a woman, no matter how capable she is. There's a fair amount of bad blood, and complications set in.

The interesting thing to me, about this third MacTaggart book, is that it takes something of a right-angled turn from the first two mysteries. HUSH MONEY is about an insurance scam, and GREEN-EYED LADY is about a politician who gets caught with his pants around his ankles, but in both cases there's more to it than meets the eye. The thing is that in both books there's a large cast of shifty characters, any one of them with a motive to stab someone else in the back, but in THE LAST HEIR the suspect pool is very shallow - three to five at best - which makes it a closed system, in a way like one of those English country house mysteries, where it's either the least likely, or the most obvious suspect winds up being the next victim. The other tricky sleight, or reversal of expectations, the author pulls off, is that the crime doesn't appear to have a motive. Nobody profits by it. In point of fact, the other way around. The scheme, for lack of a better word, results in a net loss for everybody, which suggests none of them cooked it up in the first place.

Greaves winds the spring, and sets up the contradictions, and then at the end, when he shakes the tree, an enormously satisfying solution falls at your feet. And there's no cheating, no deus ex machina, no hidden secret held back until the final revelation. It's a terrific example of how character drives plot, even in a puzzle story.

Speaking of, MacTaggart is wonderful company. Jack's basically a wise-ass, and half the fun is listening to his voice. He's something of an unreliable narrator, not in the sense that he keeps anything from you, but that he's as much in the dark as you are. Which is another instance of how skillfully Greaves deploys the pieces on his chess board. You're not entirely sure the bishop always moves on the diagonal or whether the knight can jump an intervening pawn. In other words, MacTaggart begins to recognize not the pattern of a plot, per se, but the dynamics of inner history, family grievances, personal loss, the template of sorrow. One of the things about Jack himself that seems very true, to me, and true to life, is that he internalizes these other griefs. He lets them inhabit him.

He's also snort-coffee-out-your-nose funny - which, when you think about it, is quite possibly a defense mechanism, and a very sly way of revealing Jack's own character.  Here he is on meeting the local eminence grise.
"There's a unique odor - an oleaginous mingling of dust and wood polish, incense and candle wax - that's instantly familiar to anyone, anywhere, who was raised in the Catholic faith. I'm thinking they must manufacture it in the basement of the Vatican and ship it out to the various dioceses in fifty-gallon drums. If they were smart, they'd bottle the stuff and sell it as a perfume, or maybe as an aftershave.
"They could call it Guilt. They'd make a fortune."

There's a confidence, and an engagement, in the writing. Jack is both sympathetic, and the kind of guy who holds you at arm's length. You might say the same of the author. Chuck Greaves invites you in, he makes you comfortable in his invented world, you feel you're in good hands, and then he sandbags you. THE LAST HEIR fools you not because of its artifice, but because it's genuine. The characters who people the story aren't generic conventions. 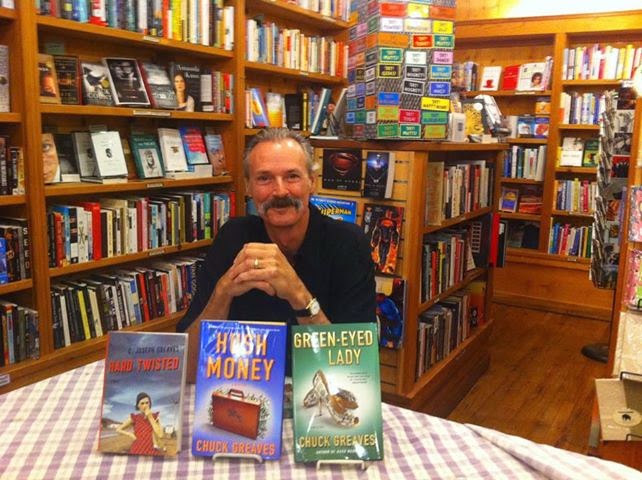 Like being a mystery writer. Stony soil, but it pays off.

[I should explain, in the interest of full disclosure, that Chuck Greaves and I know each other personally, and even did an event together, at Collected Works bookstore in Santa Fe, back in the late spring, where we essentially spent an hour trying to crack each other up, like Bob and Ray, or Lucy and Ethel. Chuck is hugely personable, and tells very funny stories, many of the NSFW, but I hasten to assure you this has nothing to do with my giving his book a strong review. On the other hand, I do expect a case of wine one of these days, from his vineyard, Stark Raven.]