I came to Jacqueline Winspear late, and started reading her books back to front.  I reported here last January about her enormously engaging and quietly unsettling memoir, This Time Next Year We’ll Be Laughing, and the first of her fiction I read was The Care and Management of Lies, a WWI standalone.  Lies is a novel of manners, in its breadth of purpose and minute attention to detail, but it’s a suspense story as well, where character collides with necessity.

My rule of thumb has come to be, that if I stumble across a writer new to me, I try to go back and start reading them from the beginning.  In this case, Jackie Winspear has a series; book sixteen of the Maisie Dobbs mysteries, The Consequences of Fear, came out this past March.  Girding my loins, I began with the first, Maisie Dobbs. 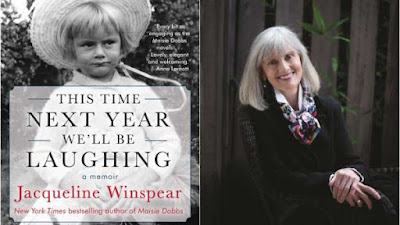 Spring, 1929.  This is intentionally misleading, because there’s a long flashback, mid-book, to Maisie’s early time in service as an upstairs maid, and then to the war, a dozen years before, when she was triage nurse.  We’re often told that flashbacks are a narrative kill switch, but it’s a device that works for Maisie.  For one thing, the tension between past and present is exactly what gives the story its punch, and both the hook and its resolution depend on looking the unburied past square in the eye.  It’s a story about consequences, even if they aren’t the consequences of our own choices.

Two things of note, both related to period.  The books take place between the wars, and as the shadow of the first war falls across the stories, the coming of the second war is a grim foreboding.  But there’s no feeling of artifice, or metafiction.  Winspear isn’t trying to recreate or reshape the Golden Age – one thinks in particular of Dorothy Sayers, and The Unpleasantness at the Bellona Club, very much grounded in the memory of the trenches – and you don’t feel she’s writing pastiche.  Winspear’s treatment of the time is far from nostalgic; it’s quite immediate.  The other thing is that barriers of class and gender are only dealt glancing blows.  They’re present, but they’re part of the fabric.  They don’t call attention to themselves. 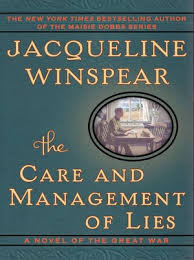 It isn’t always the case that knowing something about a writer tells you anything about the writing, or gives us any special insight into the process, or the method, or even a worldview, but having read This Time Next Year, I do in fact think it sheds light on Maisie’s world, and how Jacqueline Winspear inhabits it.  There are influences and intersections, overlaps and dissolves.

“Maisie drove down to in early September, when the spicy fragrance of the hops still hung in the warm air of an Indian summer.”  This is, unapologetically, transcribed from Jackie’s own girlhood.  She says, also, that knowing her grandfather’s fragility (from shellshock), but without understanding why, is part of what brought her to the primary matter of the novels, the injury that violence does to our sense of belonging.  It murders trust.

I don’t think the Maisie books are dark, but neither are they slight.  Winspear manages a sure balance between the night sweats and the sunny uplands, and gives us the confidence that simple decency is a lasting virtue.  It’s a comforting thought.

Posted by David Edgerley Gates at 00:01