by R.T. Lawton
The Story 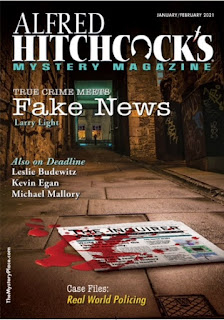 My latest story, "A Helping Hand," is currently out in the AHMM January/February 2021 issue. It is the 8th in my 1660's Paris Underworld series. The protagonist, a young, orphan, incompetent pickpocket, tells of his adventures trying to survive in the criminal community of old Paris.


Like most of my mystery short stories, the storyline is based on my undercover experiences on the street where hardened criminals often looked on others as marks, or pigeons to be plucked, whether these street wolves were after your valuables or just to somehow gain an advantage on you.
A simple uncomplicated con, for instance, used by some of the heroin users in 1970's Kansas City when the users needed money for their next fix went like this. They would enter a large department store, go to a counter and request one of the store's empty bags with the store logo on it. Then, they would move on to the home goods section and pick out an appliance, say a toaster. When no one was looking, they'd place the toaster in the store bag they'd acquired at the first counter. Next stop was the Customer Service Desk where they produced the toaster in the store bag, claimed that a relative/friend/someone had bought it for them as a present, but they already had one, therefore they would like to return it for cash. That's why these days, most stores won't give you an empty store bag, plus you need a receipt to get your money back on a returned purchase.
But then, not all cons are for instant cash. We've all heard reports of pimps and other conmen hanging around bus stations to seek out naive youngsters and pretend to befriend them in order for the street criminal to take advantage of the unsuspecting new arrival. Unfortunately, the world has many predators out there.


While trying to lift the purse of a wealthy merchant, our protagonist is interrupted by a man with a scar on his face. Scar Face convinces the orphan pickpocket that he has done the orphan a favor by saving him from arrest by the city bailiffs. He continues by telling the orphan that while he did not get the merchant's purse, Scar Face has some comrades with a pending burglary which will make them all some good coin in the end. Seems all these burglars need is someone small enough for a special job. The orphan agrees to join the group and help with the burglary.


One ploy of many cons is to convince the mark that he is on the inside and that someone else is the victim.


Our young pickpocket protagonist is introduced to others involved in the burglary scheme. Gradually, Scar Face and his adult partner feed little bits of information to the young orphan about the pending crime. Since our protagonist hasn't eaten for a while and is quite hungry, he goes along with the plan as it is laid out.


Sooner or later, most cons involve a double-cross where the conman expects to end up with all the proceeds from the scam. The victim finds himself holding an empty bag. A good conman will then also make the situation appear as if someone else took the proceeds. This misdirection gives the appearance as if he too is a victim of unforeseen circumstances and not at fault for the misfortunate events which robbed the main conspirators at the last moment.


Back to the Story


The burglary is successfully completed and the loot is stored in a safe storehouse. Now, the plan is for the loot to be sold off in small lots and the resulting money to be equally divided amongst the four burglars, but Scar Face puts his double-cross into play.
Our young, incompetent pickpocket may not know all the tricks of the game, but he has lived in his criminal community of old Paris long enough to have learned some tricks of his own. He soon enlists the assistance of a couple of unlikely allies.
Get your copy of the Jan/Feb 2021 issue of AHMM, read the story and watch the con unfold.
So what would you have done if you lived on the streets of 1660's Paris and were hungry all the time?
Posted by R.T. Lawton at 00:01