by Michael Bracken
Over the course of two-plus years, I’ve written stories for three anthologies edited by Josh Pachter and, publishing being what it is, all three anthologies are scheduled for release this year, two of them in April, within seven days of each other.

“Ray’s Dad’s Cadillac” will appear in The Beat of Black Wings: Crime Fiction Inspired by the Songs of Joni Mitchell (Untreed Reads), scheduled for release April 7.

“The Possibly Last Case of Tiberious Dingo” will appear in The Misadventures of Nero Wolfe: Parodies and Pastiches Featuring the Great Detective of West 35th Street (Mysterious Press), scheduled for release April 14. 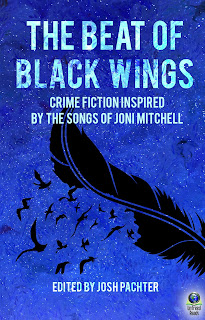 When Josh first approached me about contributing to the Joni Mitchell anthology, I was intrigued. Though I listened more often to hard rock (Black Sabbath, Deep Purple, Mott the Hoople, and the like) when I was younger, I was quite familiar with Joni Mitchell, Joan Baez, and many other singer/songwriters from that end of the musical spectrum.

Several hours after receiving the invitation from Josh, I tried to claim “Woodstock.” By then I knew the protagonist and had roughed out a plot. Unfortunately, one of the conceits for the anthology was that every one of Joni’s albums would be represented by at least one song, and someone had already claimed a song from her album Ladies of the Canyon.

I put that idea aside and binge listened to Joni Mitchell for the rest of the day, finding and reading lyrics whenever a song caught my ear. Thirteen hours after receiving the invitation, I had locked down my claim to “Ray’s Dad’s Cadillac,” from the album Night Ride Home.

“Ray’s Dad’s Cadillac”—the story of a young woman, her boyfriend, and what happens in the back seat of his father’s Cadillac—caught my attention because I thought there was a story hidden between the lines of the lyrics and because I remembered my mother’s big-finned 1959 Cadillac Sedan de Ville.

The writing came easily, and six days later I turned the story in. After a few minor editorial adjustments and correction of a few typos, Josh accepted the story.

My take on “Ray’s Dad’s Cadillac”: When Ray’s dad’s winning streak turns into a losing streak, his Cadillac is repo’d by his bookie, and Ray’s girlfriend takes it upon herself to get the car back. 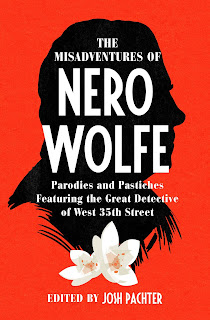 Alas, writing “The Possibly Last Case of Tiberious Dingo,” my Nero Wolfe parody, did not go as smoothly. I seriously under-estimated my knowledge of the Nero Wolfe canon, and I found myself doing quite a bit of research, writing and abandoning several ideas, and not turning in the initial version of the story until nearly three months after accepting Josh’s invitation.

That’s when I learned I hadn’t done enough research, and during the following six months Josh guided me through two start-to-finish revisions of the manuscript. The story remains essentially the same as in the initial draft—at the insistence of his longtime assistant, an aging detective long past retirement and near the end of his life takes a new case—but I relied heavily on Josh’s suggestions and revision demands to shape the story into its final form.

“The Possibly Last Case of Tiberious Dingo”: Convinced someone is stalking her, Baldy Badloss’s dance partner Ruth Entemann hires his boss Tiberious Dingo to learn who and why, and the investigation uncovers more family secrets than any of them expect.

If there are any lessons to learn from these diametrically opposed writing experiences, they may be:

2. A good editor knows when a light edit is appropriate (“Ray’s Dad’s Cadillac”) and when to demand significant revisions (“The Possibly Last Case of Tiberious Dingo”).

And the story inspired by Joni Mitchell’s “Woodstock” that Josh nixed when I proposed it? A year later I returned to the idea, wrote the story I had imagined at the time, and “Woodstock” (the story) will soon appear in Alfred Hitchcock’s Mystery Magazine.
Posted by Michael Bracken at 00:00