Agent Running in the Field

Like a lot of people, I always looked forward to the new John le Carre. I admit I found The Looking-Glass War unconvincing - for very specific reasons: it was my old operational area, as it was le Carre's, and I thought the premise was faulty. As for The Naive and Sentimental Lover, I've never managed more than the first fifty pages. But in general, what an astonishing run.

Then, after The Little Drummer Girl, we have (dare I say?) a falling-off. I don't buy into A Perfect Spy, despite the amazing portrait of Ronnie, and how clearly the book resonates with le Carre himself. He roars back with The Russia House, but follows up with three more duds. Tailor of Panama is a full-on score, and then four, or even six, passable novels that limp in. I know we're holding him to higher standard, but that's exactly the point.

So, let go of your apprehension. I'm here to tell you that Agent Running in the Field (one of his more clever titles, by the by) hits it out of the park. The old boy definitely isn't hanging up his spikes just yet.

I like the way he's been telling his stories, lately. The impatience with exposition, when he used to be more lapidary. Dutch Leonard once said, skip all that crap the reader is going to skip. It's unnecessary. If you trust you're in honest hands - and who more honest than Dutch or John le Carre? - oh, wait. Either one would cheerfully lead you down the garden path, and you know full well you'd follow along without a moment's hesitation.

Agent Running is in many ways a return to form, although he mercifully leaves out the domestic betrayals this time around, the defections in place, and concentrates on the operation, its collateral, and the product. The scope is necessarily tight. The guy himself isn't some old soldier, turfed out and weary, but mid-career and restless. You might wonder, in the moment, why he so credulously accepts a challenge from a younger self, when the kid so generously telegraphs his own disaffection, but the weakness here is vanity. In fact, when Nat, our hero, takes on the job he's offered, he clearly thinks it's beneath him.

Agent Running is really more Smiley's People than any of the recent books. For all that Karla used Ann to blind Smiley to the serpent Haydon, the narrative spine of Smiley's People is always Eyes On The Prize. Karla is looking for a legend for a girl. This is the single detail that drives the story. Smiley fills in the context. In the new book, context appears in the foreground, but of course misleadingly, because as always, the devil is in the details.

I don't know if you'll find this as interesting as I do. Legacy of Spies was elegiac and regretful, a swan song, the old boys revisiting past triumphs over a snifter, and not liking their history revised - although George Smiley had a bracing cameo, still with all his buttons and most of his teeth. Agent Running revisits not just Smiley's People, but Call for the Dead, le Carre's first book. It's a story about treachery, how not? That's le Carre's stock in trade. What's refreshing, oddly, is the very retrograde approach: sources and methods. 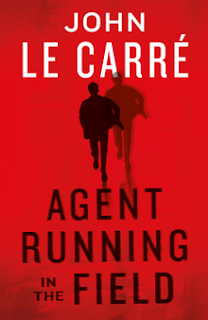 I look forward to reading it. I was put off by Little Drummer Girl, myself, and some that came after, and haven't gone back to Le Carre in quite a while. I'll check this one out.

David, thanks. I'll take a look at it.

Looking forward to it. ALso wishing I could find the tv versons of TTSS and Smiley's People to rewatch.i

Robert -
Both available on DVD, either PBS or BBC. I found them at the library. Only issue is that there's some selective editing, and some scenes are missing that were originally broadcast.
Eve -
LDG was pretty controversial at the time, because people questioned its political sympathies, but purely from the point of view of technical skills, I thought it was masterful.

I also find Le Carré novels hit-and-miss, and sometimes we prefer different stories– I found the Panama Tailor a bit disturbing, but liked the Night Manager. better than Partly my problem is difficulty processing betrayal, which Le Carré excels in.