I do not write non-fiction often. The current issue of the Southern States Police Benevolent Association, BLUE REVIEW (Issue 12) has my article THE WRITER COP. Thought I would share a portion of it here. 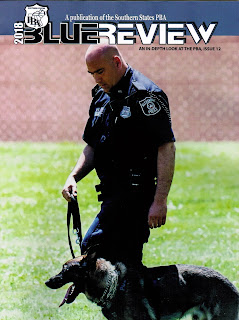 There are advantages and disadvantages of being a cop-turned-writer

We know the life. We know how a police officer thinks, how a cop talks, what a cop will do and we write from there. We are eye-witnesses who must learn how to write good fiction to get the stories out there. So, we start a little ahead but until we learn how to write, all we have are anecdotes.

Disadvantages
It is hard for us to cut corners in our fiction, just as in real life. We have to solve the crimes as real cops do and sometimes it isn't interesting. That's why learning to be a good fiction writer is paramount. We have to know how to add excitement to mundane procedures. The dean of our field, Joseph Wambaugh, taught us this lesson we should never forget.

Another disadvantage is publishing's perception of police officers in fiction. Some agents and editors think television cops are real, that cops beat up prisoners all the time, violate people's rights, shoot everyone they can. Real cops like that end up in a penitentiary. Then again, a good story outranks reality. We are writing fiction, so when I read about a cop who is over the top, well that's fiction. It's just a little harder for us to write that way. We need to learn how to do this effectively. My recurring character John Raven Beau is larger than life and has shot far too many people in my fiction. It took a while, but I learned.

We cop writers must remember the basics

A Good Plot is the backbone of the police story
A well-plotted scenario will allow the writer to create memorable characters, unforgettable scenes, uniquely described settings; so long as the writer does not forget normal police procedures. Deviation from the norm removes credibility from your story. Strive for believability.

Keep it Action Oriented
Although real police investigations include long, sometimes grueling days of unending canvasses, surveillances, and dead-end leads, you should be selective in what you present the reader in order to keep your story moving forward. Short scenes featuring crisp dialogue can streamline the most mundane parts of an investigation. Leave out the boring parts.

Create well-rounded characters
As in almost all fiction, character is the heart of the story. Although the hero of the police procedural is usually a police officer, they are real people existing in a familiar world. What happens to them can be extraordinary.

Create a distinctive setting
The setting is the skeleton your story is built around. It is more than just the description of a place or time period. It is the feeling of the place and time. Give the reader a distinct, well-rounded setting stressing sensory details – the sharp smell of gunpowder, the coppery taste of blood, the tacky feel of rubber grips on a weapon when the hero's hand are sweaty.

Accurate language adds credibility
Through dialogue, you have an excellent opportunity to create emotion, from scintillating nails-on-a-blackboard passes uttered by creepy villians to hard-nosed talk between overworked detectives. Use what you know. You know how a cop talks.

Be Realistic
Make sure of your facts. We all know revolvers do not have safeties nor can a silencer be effective with a revolver or any open-breech weapon. Detectives take notes. How many times have you seen a movie or read a book showing detectives taking notes? Not many. I've been a detective most of my career. I never shot anyone but I killed a lot of pens. A pen is a detective's most useful took and mightiest weapon. Every killer on death row began his or her long trek through the criminal justice system with a detective taking notes at a crime scene.

A definite resolution helps
Don't cheat the reader out of an ending to your story. Police cases end, usually with an arrest and trial, sometimes with a shootout. This is a natural, climactic event. Even cases that are suspended or closed without a solution have a climactic moment, when the investigators face the nightmare of someone getting away with murder. In your resolution, you should remember something is usually affirmed. Good triumphs over evil, or at least goes the distance.