The Uses of Mystery

Some time ago, Thomas Pluck devoted his last SleuthSayers blog to the proposition that the novel of social realism is alive and well in certain gritty segments of the mystery genre. By coincidence, I had just finished reading Jim Gauer’s wildly ambitious, overly long but brilliantly written Novel Explosives. 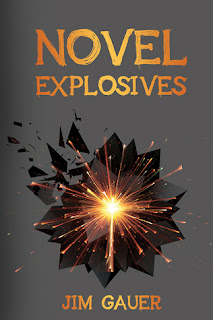 Gauer uses mystery and thriller conventions to depict the unholy nexus of crime, finance, corporate exploitation and weaponry that have devastated Mexico, especially Ciudad Juarez and the unfortunate young women who labor in its maquiladoras.

He presents familiar elements – though often with a surreal twist. Thus we have the cold and cynical Shakespeare quoting crime boss. Plus his two minions, Ray and Eugene, who are on a mission to kill the man we know first as The Poet and later as Douchebag, the erstwhile unsuspecting financial manipulator for the drug ring.

We have a possibly helpful, possibly complicit beauty in Guanajuato, Mexico, and her opposite number, who may or may not be on the side of the angels, up in El Paso. We have enough heavy weaponry to outfit any number of military thrillers and a vet with very serious PTS – but only on odd numbered days. We have police overkill and atrocities on every side and more than this reader could understand about financial chicanery.

All this is immensely plausible, since Gauer, who is a poet, also worked for the military before making his fortune as a hedge fund executive and a venture capitalist. He is also clearly a man with a big interest in modern philosophy, human physiology, Aztec poetry and many other more abstruse topics. Your enjoyment of the novel probably depends on your own similar tastes.

But from the point of view of mystery/ thriller writers, Novel Explosives – and I should mention the ‘novel’ of the title refers to innovative weapons – is a striking example of the uses of our favorite conventions and an illustration of the fact that every generation only has so many stories.

The 18th century loved tales of female virtue imperiled but defended. The 19th enjoyed the pursuit of love and marriage then switched to the dangers of want and misery. Our side of the Atlantic loved Horatio Alger stories and then the still-popular immigrant experience. In mysteries, we, like Mr. Gauer, are fond of flawed heroes struggling to do right in a corrupt world.  Ray, his hitman, is the most morally alert of his characters, and it will not spoil anyone’s enjoyment of the book to reveal that he has nearly superhuman endurance as well as  exceptional military skills.

The creepy Mr. Big, a staple of popular fiction in print and on screen, also makes an appearance in the predatory drug lord Mr. Gomez, who represents the criminal component of  what the author sees as a corrupting and disastrous web. Drug use (and the War it) on feed profits to the violent Mexican cartels, which in turn corrupt the Mexican police and military. Criminal financiers launder drug profits and outright criminals funnel south the military grade weapons both cops and crooks need.

Exploited on every side are the unfortunate workers of the maquiladoras, often peasants forced off their land by the changes wrought by NAFTA. The workers are heavily female, very young, low paid, exploited, and at risk of rape, torture and murder. Their male counterparts, less desirable to the corporate types running the factories, opt for risky but lucrative work in the drug trade. Altogether crime, corruption and violence make Ciudad Juarez one of the anterooms of Hell.

Where Gauer departs from the mystery/thriller format is in his treatment. The pages’ long paragraphs, the dissertations on everything from Native American medical techniques to 20th century Portuguese poetry, and enough digressions to rival Tristram Shandy take Novel Explosives into more literary territory. Add a strong strain of surreal fantasy and you are in Thomas Pynchon’s neighborhood not Michael Connolly’s.

But despite the literary fireworks, the bones of the thing will be familiar to Sleuthsayers fans: a amnesiac hero pursued by professional hitmen, both of whom have a conscience. A brutal crime lord who never dirties his hands, corrupt financial men behaving like Masters of the Universe, police and military overkill, and the deaths of innocents.

The treatment in Novel Explosives is surreal, fanciful and philosophical, but the structure owes much to popular, even pulp, fiction, illustrating once again the almost endless flexibility of the genre.

For an interesting interview with Jim Gauer – and details of doing research in Juarez –listen in to Eye 94 out of Chicago at Jim Gauer on Eye 94 .
Posted by Janice Law at 00:00