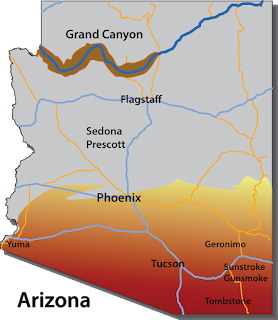 It affects the whiskey, Fire and Fireball. Overly hot isn’t a problem– guests can pack as much or as little heat as they wish.

As you know from past dispatches, Gunsmoke’s phone and internet service has varied from non-existent to barely readable. The majority of computer users I met still use Windows 7, including a Tucson hospital. They don’t necessarily want Windows 7, but they’re stuck with it because of lack of internet bandwidth. A Windows 10 upgrade at available speeds could extend from ten to thirty hours.

Based upon library access of about 512 megabytes per hour, I calculated a local bit rate of 1.1-Mbps… reportedly the same ‘speed’ all of Holyshiteitshot County government uses, a tiny percentage of ordinary personal hotspots. If utility lines become too hot, electricity and internet shuts down. Lack of power means the county government shuts down as well.

It’s not their fault. As everywhere, large cities and heavily populated counties suck up the majority of resources and benefit from economies of scale. While rural roads appear in good repair, lane markings haven’t been painted since the WPA. In the intense Arizona heat, reflective paint temperature differences deteriorate asphalt and cause ‘raveling’. A county that paints lines and turn arrows also means the county must budget for pothole repairs.

In previous articles, I teased about Gunsmoke and Sunstroke, Arizona, but residents haven’t strayed far from their pioneer roots. They are deserving people doing their best to eke a living from an unforgiving desert. Doing so in 110° heat takes a lot of damn guts. They put up with haboob sand storms and dust storms, dry rivers, monsoons and flash floods. Why the hell should they put up with poorer communications than Third World countries?

Despite accusations of New Deal communism, REMC brought power and phones to rural America, building an unrivaled infrastructure for its time. Possibly an REMC scheme might work for the Internet. Certainly customers clamor for connectivity and a few are lobbying for it. More power to them.
Posted by Leigh Lundin at 00:00