The Long and the Short of It


by Thomas Pluck
In these divisive times, I need to let you know where I stand. There are some things people just can't see eye to eye on, and we can avoid talking about it or we can just hash it out and get it over with.

What the heck is wrong with people who don't like short stories?

They pick up a book and see that it's a story collection, and then drop it like like a road apple, before they catch something. I just don't understand it, but I'll try.

I love a well-crafted short story, and of course, not all of them are. In the mystery community, some editors have said that they get a lot of short stories with series characters, meant as promotion for a the latest novel, and they aren't very compelling unless you're a fan. I've been reading a lot more short stories this year after I issued myself The Short Story Challenge, so I've read a couple of those. They're a disservice to the medium, if you ask me. There are some excellent short stories starring series characters in the genre–I'll pluck "Batman's Helpers" by Lawrence Block, as one–but in the end, they are often unsatisfying, because we are used to spending time with these characters in a novel, where you can get away with things that you can't in a short story.

A story is its own little world and must be self-contained. It may be served in a buffet with others, but unless it can be served alone, like a savory dumpling of deliciousness, it isn't a story, it's an advertisement. A story isn't an idea that can't be expanded into a novel. It's almost a novel that's been compressed into a diamond. The flaws and inclusions can't be visible to the naked eye, because the reader will spot them. Writing a good short story takes concentration and focus.

Maybe reading them does, as well.

A compliment I received from a reader was "I can't skip anything, when I read your stuff." Now, I don't consciously adhere to Elmore Leonard's rule of "I tend to leave out what readers skip", but because I honed my skills on flash fiction, I try to make every word count. In novels, I had to give myself a little more breathing room, to let the characters think and feel, to let the reader get comfortable with them. Not all short stories have a laser focus, or require you to read every word like it's a puzzle, but maybe it's less relaxing to read them? I don't know. For me, I enjoy getting lost in one, for a dozen or so pages.

It's also easier to put a novel down and pick it up later. With the rise of the smartphone, editors have tried to tap in to the short attention span of the busy reader. There was the Great Jones Street app (R.I.P.) that didn't make it. Starbucks tried super-short stories with your coffee. I think most stories require more focus than we're used to giving these days. Maybe a serial story in very short parts would work better, like 250 word chunks of a novella?

I've written stories as short as 25 words ("The Old Fashioned Way," in Stupefying Stories: Mid-October 2012),  and as long as ten thousand ("The Summer of Blind Joe Death", in Life During Wartime). The shorter ones tend to be harder, but more satisfying. My favorite flash tales were published at Shotgun Honey and The Flash Fiction Offensive. They're still delivering the goods. For me, a good flash fiction crime tale should be indebted to Roald Dahl or John Collier. "Slice of Life" stories tend to be boring, unless the writing is a knockout. Stories are where I cut my teeth, made my bones. They're a challenge, and while zine slush piles can be no less navigable than querying agents with novels, there are plenty of markets and you can still make a mark in readers' minds. 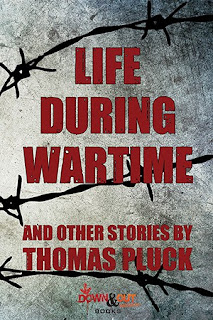 Down & Out Books collected the best of my short stories in Life During Wartime.

If you want to read what I've been reading, and I've found a lot of great new and old stories this year, check out The Short Story Challenge.

If you want to read some good short stories, but prefer novels, there's always the "linked short stories" books. I have a few favorites in the crime genre.


Country Hardball by Steve Weddle is a great one, set in Arkansas along the Louisiana border. Steve edited the excellent Needle: a Magazine of Noir and knows a great story. And how to write one. Check out "Purple Hulls" for an example.

Jen Conley's Cannibals: Stories from the Edge of the Pine Barrens is another great one. Jen gets into a character's heart, whether it's Metalhead Marty, unlucky in love, or a young girl playing tag in the woods, when she runs into an encampment.

Hilary Davidson is another of my favorite short story writers, and The Black Widow Club collects some of her best. And people say my stories are dark?

So, are you one of the people who prefer novels over short stories? If you don't mind, please tell us why, in the comments. We won't throw rocks, or think any less of you. We like what we like.
Posted by Thomas Pluck at 00:00