On NOT Talking Politics on Social Media

Needless to say, it's been quite a week in U.S. politics—the stunning finale to a long and bitter political campaign. And while a Washington Post feature on Wednesday was headlined "Our Long National Nightmare Is Over" (an article on the election season ending, a different headline in the online version here), the truth is, of course, that the nightmare is just beginning from the perspective of half the country. Another headline that day talked about half of the country being filled with hope, the other half horrified, and I realized that this second headline would have been true no matter which candidate won, and the same would be true of that nightmare beginning—for Republicans if Hillary had claimed the presidency, same as for Democrats now. 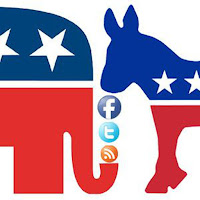 As for the meaning behind that first headline—the election done, the ads gone, whatever—clearly it's only half true. The news remains focused on coverage and commentary, office chatter still revolves around the election and what's ahead, and likely your Facebook wall or Twitter feed is still as thick with election talk and post-election talk as mine is.

While I've occasionally shared online an article I've found interesting (I particularly appreciate when the Post covers my home state of North Carolina, as in this article I shared yesterday), I almost steadfastly avoid talking politics in my posts. I rarely post articles with any clear partisanship, and I haven't talked publicly about my own beliefs, hopes or fears. I don't know if I'm the minority here; it seems like so many of my friends are very vocal on such topics, but it's hard to gauge the absence of such talk—who's avoiding politics and, equally important, why.

For me, politics is a fairly private thing. I have very strong feelings on most political issues, and I try to stay educated and informed as best I can. I subscribe to the Post, and its website is the homepage on both my office computer and my laptop, so I'm checking in there several dozen times a day. I read both news coverage and commentary—from both sides of the divide—and I read letters to the editor to get a sense of what readers are thinking. (Despite myself, I occasionally read the comments section on online articles, and then remind myself again why I shouldn't.) Circling back to social media, while some people I know went on Facebook blackouts during the election season, I scanned my newsfeed to see what friends and acquaintances had to say or what they posted. And come election day on any year, I always vote—and my wife and I have taken our son with us each time we've voted in the nearly five years since he was born, hopefully inculcating in him the importance of taking part in the process.

So I read. I listen. I participate. But when it comes to talking about it or posting about it....

My family has never been one of those to passionately debate politics across the dinner table (I assume this happens in reality somewhere and not just in the movies), and on those occasions when we've been divided on topics or candidates, we've politely agreed to disagree and then steered clear of discussing it any further. At times at cocktail parties or dinners, I've had people talk to me with some assumptions (often mistaken assumptions) of my political beliefs, and while I have other friends who would've jumped into such conversations—expressed themselves, explained themselves, gone on the defensive or even on the attack—I usually listen briefly and then steer myself away, exiting rather than engaging. Frankly, I don't see anything to be gained by such a confrontation, especially in this era of solidly entrenched beliefs. (I hope that the other motives don't lurk beneath this, that this isn't evidence of some cowardice on my part.)

Maybe that same aversion to confrontation is true for me of social media conversations. I've seen how one person's passionate post can provoke another person's vitriolic comment and then the endless spiral of back and forth and back and forth on a topic until exhaustion sets in (or perhaps until someone is muted, blocked, unfriended); this is not how I want to spend my time and energy.

Maybe my reluctance comes from recognizing the futility of it all. Many of us—maybe most of us—live to some degree in an echo chamber; we're drawn to people whose interests and values mesh well with our own. It's become a cliche—and then the punchline to a joke—that Facebook posts on politics won't ever change anyone's mind on a topic, won't change anyone's vote or anyone's post-election perspective either. (Revisiting my aside above, maybe it's not cowardice at all but pessimism that drives my decision.) 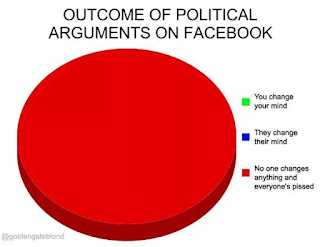 Maybe it's just that question "Why would anyone care what I think or feel about politics?"

But then a counterpoint there too, because I guess I do care what even strangers think when I see them making those moves. I admire the people who've stood at the Farmer's Market each Saturday or who've gone door to door canvassing, even if my reaction was simply to smile and wave and think that they already have my support, I'll be there, I'll vote. Is social media the same way? Does the voice being heard matter? Or is it just a smile and a wave between those of us who share the same values? And then—further down the sidewalk toward the Farmer's Market—a brisk pass by the other party at the other tent? Just keep on scrolling down the newsfeed.

And sticking with that counterpoint, I recognize that much of speaking out is also standing up, taking a stand and going on the record with it—not just letting your vote be heard in the ballot box but letting your voice be heard as well. As my wife pointed out, reading a rough draft of this post, sometimes being a silent witness isn't enough.

I have indeed appreciated reading what other people have posted online in the wake of the election—their thoughts and reflections, their hopes and fears. In many cases, it's as simple as seeing someone express an idea in print (or pixels) that I've been thinking, of feeling that brief connection of extending that bit of empathy. And I'll admit, in the days since the election, I've been aware of the silences on my own Facebook page—conscious, self-conscious both with the sense that I should say something about what has happened (shouldn't I be an active member of the world?) and with some desire to say something, to get those thoughts and feelings out.

A small step here then:

I could say that my heart hurt watching the election returns roll in, but that's too metaphorical to be accurate enough. It was a physical hurt: not a weight in my chest, not just a tightness, but a clench, a ripping; restless throughout the night, I worried that my heart might simply seize up, stop. When I got up (I can't say "when I woke"), I was haunted by the fear that the America I hoped our four-year-old son would grow up in was suddenly on track to become an America I didn't want him to grow up in. I expect I'll be living under that fear for a long while.

If you agree with me, you'll understand what I mean here. If you don't, you may already be scoffing or at least with your own responses in mind. As I said, half are filled with hope, half horrified, not much middle ground to be found.

The last thing I want is for this post to spur folks to rehash the election, to call attention to or widen that divide. But what I am interested in are the questions I've been circling around: Do you talk politics or avoid talking politics on social media? What prompts you to do it? what do you hope to gain, from others or for yourself?