David Windsor came to the throne as Edward VIII, king of
England, in January of 1936. He gave it up in December of 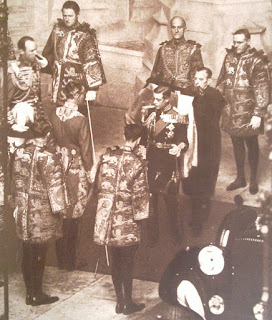 the same year, to marry the American divorcee Wallis Simpson. It was the celebrity scandal of the decade, what with the king throwing duty over the side, Mrs. Simpson under the misapprehension she could become queen, the ruling Tory party mutinous and ready to resign from government, the Archbishop of Canterbury discouraging any Anglican clergy from performing the wedding, the Royal Family caught up in both a domestic soap opera and a political crisis that threatened the monarchy - and just when you thought it was all a tempest in a teapot, it could well have affected the outcome of the Second World War.

You have to cast your mind back to the climate of the late 1930's, the consuming fear of Bolshevism and the rise of Fascist reactionary politics in Europe - the Arrow Cross in Hungary, the Iron Guard in Romania - but more particularly the Fascist states, Spain, Italy, and Nazi Germany. You also have to remember the strong isolationist and antiwar sentiment in the U.S. and Great Britain, and even overt sympathy for Nazism. (Sir Oswald Mosley married his second wife Diana Mitford in Berlin, at Goebbels' house. Hitler was there.) The most charitable thing you can say about the Duke of Windsor is that he was hopelessly naive.

Invited to Germany in 1937, after the abdication, the Windsors toured the Krupp weapons works, were Hitler's guests at Obersalzberg and Goering's at Karinhall, and gave energetic Nazi salutes. It was a general embarrassment to the British government and personally to David's brother Bertie, who'd succeeded him as GeorgeVI. Windsor, who was himself extremely sensitive to slights, apparently had no shame, or was simply insulated from questioning his own conduct. He led an unexamined life, immune to consequences and tone-deaf to anybody's grievances but his own.

The plot, however, thickens. Once the war began, the Windsors retreated first to the south of France, then to Barcelona, and then in July of 1940 to Lisbon. Spain and Portugal were neutrals, but Franco's regime was in bed with the Nazis. Windsor had made some extremely ill-judged and gratuitous remarks, proposing a negotiated peace, which came close to sedition, and the Germans pricked up their ears. David also insisted to his brother the king that Wallis be treated as a member of the Royal Family. It was this last bone of contention that suggested itself to the German foreign minister, von Ribbentrop, as leverage. What if, he reasoned, the Duke of Windsor were to return to England, and be crowned king again? Would it take England out of the war? In hindsight, it's hard to believe this ever got legs, but in the event, SS-Sturmbannfuhrer Walter Schellenberg, deputy chief of Reich state security, flew to Madrid. The operation was code-named Willi. 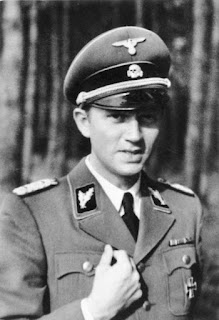 None of this took place in a vacuum, British intelligence not being utterly comatose, and Windsor known to them. He was never celebrated for discretion. It had been hastily arranged for him to become governor of the Bahamas, safely out of circulation. He was supposed to sail from Lisbon on August 1st, but mulish as usual, he was dragging his feet - his suspicions are being fed by German agents, who plant the idea that MI6 is plotting to assassinate him once he's aboard ship - and Schellenberg, now based in Lisbon, is wondering if simplest is best: why don't they just throw a blanket over the guy and smuggle him out of town? This admirably direct strategy is vetoed by Wilhelmstrasse, the Windsors set sail for the Bahamas, and the plan (such as it was) evaporates.

The issue isn't that Windsor was a vain and deeply unserious person, but that the Nazis, delusional as they were, had reason to think he might actually go along. David was a featherbrain,who probably deserved no better than the equally fatuous and self-absorbed Wallis. On the other hand, von Ribbentrop was generally regarded as a meathead by his own colleagues and in foreign chanceries - his one success the non-aggression pact with Stalin - and he lacked the imagination. Schellenberg, though, was nobody's fool, and wouldn't have chosen a fool's errand in Lisbon. So how did they persuade themselves? My guess is that it was wishful thinking. Hitler's main strategic objective was the defeat of Russia. He thought England would come to the bargaining table once Luftwaffe bombers began crossing the Channel, and it suited him to believe Windsor was more sympathetic to German aggrandizement than George VI. But as petty or foolish as David Windsor was, he must have realized he couldn't be a Nazi collaborator, a puppet king. It would have been beneath contempt.

We're left with speculation. Jack Higgins wrote a corker of a thriller about it. Schellenberg, in his memoirs, characterizes the whole episode as farce. Deborah Cadbury's recent book, PRINCES AT WAR, shows Windsor in an unflattering light, if she stops short of calling him a Quisling. In his memoirs, Windsor says he believed Germany was a military counterweight to the Soviet menace, but he never supported the Nazis. Which is it? There's no way of knowing. The man was shallow, written in water, and unexceptional. Only the circumstance of his birth gives him any historical weight, and simple accident put him in the crosshairs. Windsor had but one decent virtue. He was a stranger to himself, too oblivious to know better. 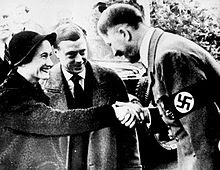 Fascinating piece. Thanks for offering it up!

In my limited experience, British and Americans disagree on few issues more than Edward VIII and Wallis Simpson. Americans lean toward a romantic view of the king who gave up the throne for a commoner to marry “the woman I love.”

The British, as David points out, have a far darker and more realistic view of their king and his consort. Some Britons believe Wallis was working for the Germans as early as 1934 when she began her affair with Windsor.

I love these history pieces you do!!!

I was surprised to learn through Anne Morrow Lindburg's books that so many people (her husband Charles and herself, for instance) initially saw Hitler as a brilliant statesman who was guiding post-WWI Germany into a strong and healthy future as a modern member of Europe and the world community. Equally surprising to me was the fact that many of his admirers appreciated and approved of his anti-Semitic views.

It takes history to really show us how easily we can be led into paths of terrible evil, incrementally and step by step, without realizing what's going on. This is sobering.

Leigh and David, indeed, in Canada (at least my part of it) we do not take the romantic view. It was a dark part of our colonial history. What a comparison Wallis is to the queen who 'took her spot' - the late Queen Mother, who famously said when asked about fleeing to Canada: "The children won't leave without me, I won't leave without the King, and the King will never leave."

I've always thought of Windsor as a Nazi sympathizer and a general self-obsessed idiot, who couldn't grasp that he wasn't the center of the universe, and very well might have gone along with Ribbentropp if they could have gotten him actually on the throne. I think "Any Human Heart" (miniseries and book) both present a devastating portrait of him and Wallis (who was as hard boiled as they come). (BTW, I think that Wallis got her comeuppance by getting him, because, once married, she could never get rid of him.)

A great book to see how people saw the Nazis and the Fascists in general at the time is John Gunther's "Inside Europe" from 1938.

First off, the Commonwealth countries were simply aghast, aside from the Australian PM,who'd never heard of Wallis Simpson. And it's painfully obvious that George VI, unprepared as he was, turned out to be a much better king. (Their father, George V, apparently once said that when Prince Edward got the throne, he'd ruin himself in 12 months.) I also always liked the Queen Mum a lot - and her remark about not leaving London during the Blitz. I personally think the Duke and Duchess of Windsor weren't simply foolish, but actively undermined the king and the war effort. (There's the persistent rumor, too, that Wallis slept with Ribbentrop when he was ambassador to the UK.) I highly recommend the Deborah Cadbury book, which brings it all back to life. And thanks for the tip on the John Gunther book. I'd forgotten him.

RE Anonymous above, Germany had operatives and sympathizers working in North America leading up to and including WW2. The Lindberghs were initially public sympathetic to the Nazis, but conveniently forgotten are the fathers of two political dynasties, Joe Kennedy and Prescott Bush. It would hardly surprise me to learn Simpson might have been cultivated by the Nazis.