[NOTE:  This is part of a series of posts designed to provide information concerning famous Phoenix crime scenes, and often providing their locations, in the belief it may be of interest to those attending Left Coast Crime's next annual meeting: Feb. 25th -28th in Phoenix, AZ.]

In today's post, we continue with the saga of the Tovrea wives.

Initially, I wrote about the robbery of one Tovrea wife: Della Tovrea, wife of E.A. Tovrea, who lived in the Tovrea Mansion in Phoenix.  In my last post, I provided the first installment concerning the murder of Jeanne Tovrea in the couple's Paradise Valley home.

As you may recall: Jeanne married E.A. Tovrea's son, Edward Tovrea, in 1973.   And, while Valley society welcomed Jeanne with open arms, Jeanne's step children -- Edward Tovrea Jr. (better known as "Hap") and his sisters, Georgia and Priscilla -- considered her a gold-digger.  This feeling reportedly intensified after their father died in 1983, leaving each adult child with a $200,000 trust fund designed to pay out $1,500 monthly, while Jeanne received the bulk of his $8 million estate, including a large home in Paradise Valley and an expensive art collection

Roughly five years later, on April Fools Day of 1988, Jeanne was shot in the head five times with a .22 caliber weapon as she lay sleeping in bed.   Evidence seemed to indicate the killer had inside knowledge: the window entered through was reportedly the only weak point in the burglar alarm system, while indications on the white carpet that ran throughout the house showed the killer had made a quick beeline to Jeanne's bedroom without having to search for her beforehand.

Meanwhile, eighteen finger prints left throughout the home -- including on the glass pane opened in the kitchen window by the killer -- were found to match no one in the family or on the house staff.

Investigators frantically tried to find a connection between the man calling himself Gordon Phillips, those 18 unknown finger prints, and the murder.

But, to no avail.

The eighteen unidentifiable prints in the murder home blossomed to 208 as detectives worked the case over time, yet the murder weapon was never found.

And, instead of too few suspects, who might have the knowledge required for this 'inside job,' they had too many.

Ed Sr. had left his three children a $4 million trust that they could only tap into after their stepmother died.

Police also eyed Jeanne's married boyfriend -- a professional rodeo rider -- and his wife.  The suspect list included: a friend who had engaged in a sour land deal with Jeanne, land speculators the dead woman had crossed when doing business in the past, and even mobsters.  For a while, police also suspected Jeanne's own daughter, Deborah Nolan-Luster, because she received over $2 million when Jeanne died.

Meanwhile:  No one had a clue to the identity of Gordon Phillips.  Nor did they have any hard evidence, beyond those prints that they couldn't match to anyone.

In 1992, the case was reopened by Detective Ed Reynolds who felt determined to find the 55-year-old woman's killer.  He finally got a break in 1995, when an anonymous caller tipped police that "Butch" Harrod had once bragged of being involved in the killing.

On September 14th, 1995 the detective interviewed 41-yr-old James "Butch" Harrod, a man previously best known for being an idea man whose ideas seldom bore fruit, but who nevertheless spent a lot of time bragging about them.

With the exception of a misdemeanor marijuana bust in the 1970's, he had no record. Police quickly learned, however, that 19 of the unidentified prints at the crime scene belonged to Butch, including one on the front gate, a dozen on the glass pane that had been lifted out so the murderer could gain entrance, and some inside the kitchen beyond that window.

Police believed Butch had been suborned by Hap Tovrea.  Even Maricopa County Attorney Rich Romley said, "I do not believe this is the whole story," after Butch's arrest.  Yet, Butch refused to confess, or to name any conspirators, though police tried to convince him that he was needlessly taking the fall for a friend who had used him.


But Butch wouldn't give in.  He told the Phoenix New Times newspaper: "It's obvious they're trying to prosecute someone else by using me.  Hap Tovrea is a flag-waving, searchlight-on-me suspect, I know that.  But I don't for a minute think he had anything to do with this."

That didn't keep police from raiding Hap Tovrea's home in La Holla, California in November of 1995, with a search warrant obtained, in part, with the supposed justification: "Edward Arthur 'Hap' Tovrea and James Cornel Harrod, a.k.a. Gordon Phillips, had entered in an agreement for Harrod to murder Jeanne Tovrea."  The motive, according to police documents, was money: each adult child of Ed Tovrea Sr. received $800,000 from a trust fund held by Jeanne when she died.  And there seems to have been evidence that Hap Tovrea was living beyond his means for years before that.

Police were unable to turn up any evidence during the search, however, so in 1987 Butch Harrod stood trial alone for the murder.  During the trial, Harrod's ex-wife, Anne -- evidently the 'anonymous caller' who tipped-off police -- testified that Butch had once bragged of "facilitating" the murder of Jeanne because Hap Tovrea had promised to pay him $100,000.  In later testimony, the jury learned there had been a flurry of phone calls between Butch and Hap during the days before the murder, and that a $35,000 payment had later been made to Butch by Hap's company. 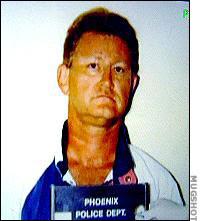 In the end, Butch was found guilty of killing Jeanne Tovrea for money.  He has lived the rest of his life in prison.

But that makes little difference to most of the stake-holders in this situation.

Hap and his family members maintain that he had nothing to do with the murder.  Butch and his backers claim he was set up by powerful people who were trying to frame Hap for the killing.  Others argue for and against each, and some suggest the guilt of completely unnamed suspects.  The only link among these different factions is the similarity of strident voices and their no-holds-barred attitude.


As for myself, I consider two things:

First: the words of Detective Reynolds as he grilled Butch Harrod, according to a 1997 Phoenix New Times article: "You're not a professional killer. ... What would it take to get you to give me number one and number two and three? ..."  I ask myself if this means that, among those 209 prints at the crime scene, perhaps police have narrowed it down to all of them having been made by four people (three plus Butch Harrod).


Secondly: I think of The Valley of my childhood, and consider the paraphrase of one older Phoenix resident, found in another New Times story : "I think of Big Daddy (E.A. Tovrea), who built that empire with handshake deals and a lot of hard work.  He knew how to handle cattle ... and people."  He adds that "The Tovreas kind of ruled things around here ... .  They were a family to recon with ... ." 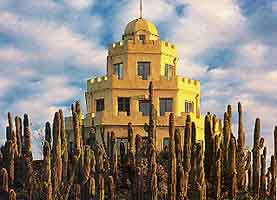 I think of that when I look upon the Tovrea's old wedding cake-shaped "castle" sitting in the midst of a cactus garden in Phoenix.

See you in two weeks,
Dixon