by Janice Law
It’s always nice to see writers try something new and different and out of their comfort zone. Elizabeth Zelvin, our Sleuthsayers colleague, has taken a big step away from her very New York detective Bruce Kohler and his friends in therapy and in recovery to tackle the lethal adventures and messy politics of Columbus’s New World voyages.
Most of us learned about Columbus from the famous rhyme and the annual school holiday. The rest of the curriculum on the Conquistadores focused on the clashes with the Aztecs and Mayans and on the destruction of the Inca Empire. But exploitation, pillage and genocide hit the New World earlier, with what became the disastrous landing of the famous flotilla on the Caribbean islands.

So devastating was the meeting between Europeans and the native Taino and Caribe, that very little of their culture now survives. Ironically, a voyage that set out to find the East Indies for trading purposes degenerated into a scramble for gold, and when that proved thin on the ground, for slaves. 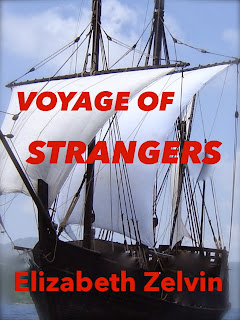 Zelvin’s Voyage of Strangers finds a way into this now obscure episode via a character who is a stranger to both the Spanish crew and the natives they encounter. Diego, a teenaged sailor in the Admiral's fleet, has a big secret: he is an unconverted Jew and as such vulnerable to arrest and death at the hands of the Inquisition.

Zelvin says that Diego “came knocking on the inside of my head in the middle of the night, demanding that I tell his story.” The young sailor showed up originally for Ellery Queen Mystery Magazine stories, but he hung around until she gave him a novel of his own. Voyage of Strangers begins with him covertly saying his prayers up in the crow’s nest of the Santa Maria, then returns him to the scarcely less dangerous Spain of Ferdinand and Isabella, where the Moors have recently been defeated and enslaved, and the Jews, the next target, forced to flee, convert or perish at the stake.

Diego is protected by Admiral Columbus, a friend of his father’s, and he hopes to make money in the New World, thus recouping his family’s lost fortune. For the moment, he puts aside some nagging worries about the treatment of Taino friends and focuses on getting his younger sister, Rachel, safely out of Seville and off to their parents living in exile in Florence. 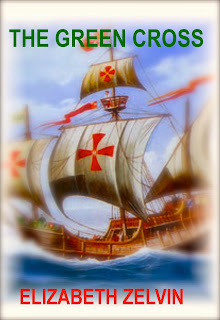 This proves easier said than done. Diego is a paragon of an older brother, but Rachel, though charming in every way, is a handful. She’s sure that she can pass as Christian, having spent some time hiding in a convent; what’s worse is that she’s also sure she can pass as a boy, and she fully intends to accompany Diego on the Admiral’s next voyage.

The novel really is in two parts, the Spanish segment, involved with the preparations for the second and much larger expedition to the New World, the dangers of the Inquisition, and the difficulties of traveling safely with a lively girl of thirteen, and the sea voyage and the delights and terrors of the islands.

The island segment is more gripping and unusual. Zelvin, who has visited in the Caribbean and knows tropical climates well after a time in Côte d’Ivoire as a Peace Corps volunteer, does a good job of imagining the lush island with its spectacular hills and waterfalls, abundant food and generally easy living. Alas, the beauty of the island is soon tarnished by the demands of European military architecture and an obsessive pursuit of gold that eventually corrupts even Diego’s admired Admiral Columbus. For a time, however, the brother and sister enjoy the freedom of the forest and the friendship of the Taino, whose generous and easy going culture will prove no match for rapacious guests operating in a completely different economic system.

Voyage of Strangers is very good on the tragic clash of cultures that ensues. Diego, particularly, is almost preternaturally understanding and broad-minded, although his own experience as a hunted minority does give him an insight into the plight of the Taino.

The story of the young people and their adventures acts somewhat to ameliorate what is otherwise an unrelievedly grim account of the conquest of the Caribbean. Diego and Rachel and their Taino friend Hutia are good company. The island, at least initially, is an adventure playground, and the novel, as well as its quite modern characters, is both suitable and historically enlightening for teen as well as adult readers.
Posted by Janice Law at 00:01