by R.T. Lawton
What's that, buddy, you say it's a couple of days after New Year's and you're feeling a little disoriented? Your mind is uneasy and your hand hesitates when it comes to putting the current date in that upper right hand corner of your check when it comes to paying bills? You have to stop and think what year you're in?
Well, you're not alone in this, my friend. That's been the way of the world since civilization began. Different people have started their new years on different dates for centuries and some of us still aren't on the same calendar. 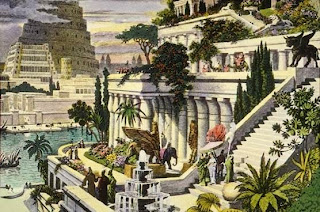 Take for instance, the Babylonians some four thousand years ago. Yeah, them guys what invented the original Hanging Garden. Their new year arrived on the first new moon following the vernal equinox--the day in late March which had an equal amount of day and night. This was the day they cut their barley. I assumed they then used it to make bread and beer for the resulting celebration. Happy New Year!!! I wonder if them guys were also the ones who came up with the idea of blowing horns at New Year's parties while sipping beer?

Ancient Egypt, on the other hand, pinned the first day of their new year to the annual flooding of the Nile, which made their fields fertile again for another year. This date also coincided with the rising of the star Sirius. Not sure how they got it to rain enough upriver for the flood to arrive in time for the star to shine, but that was probably enough to make an ancient Egyptian religious. 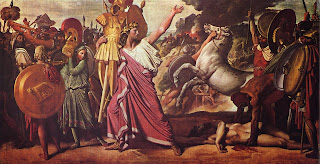 Then along comes Romulus, the founder of Rome in about the 8th century BC. He gets credit for the early Roman calendar consisting of 10 months, or 304 days in a year. Time was short in them days. His new year also started on the vernal equinox, although many subsequent rulers commenced their new year on whatever date they began their rule. Talk about having trouble planning your New Year's Eve parties in advance. Later, King Numa Pompilius decided to stretch things out, so he added the months of Januarius and Februarius. Gradually, the calendar fell out of synch with the sun, so when Julius Caesar got to be the man in charge, he put together a bunch of astrologers and math guys. With their input, he then invented the Julian calendar, obviously named after some fellow he knew and admired. Caesar declared January 1st as the first day of the new year, in honor of Janus, the two-faced god of beginnings. If I remember right, that Janus guy used to wear a mask. Citizens then attended raucous parties. Probably drank some of that Babylonian brand of beer. However, I think them Romans, to show they were a higher degree of sophisticated civilization than anybody else, were actually partial to the consumption of wine. 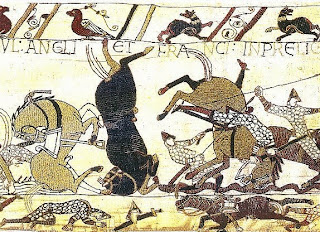 In 1066, William the Conqueror defeated Harold at Hastings and therefore declared January 1 to be the start of the year. It was his opinion that his coronation in England should start the year, especially since that date was also supposedly the the date of the circumcision of Christ (the 8th day after his birth on December 25th as they reckoned it). Seems the ruler got to make the rules, and it was good to be the king. This January 1 decree soon slid into disuse as England joined the rest of the Christian world to celebrate the new year on March 25th, which was known as Annunciation Day or Lady Day, the day Mary was allegedly told by Gabriel that she would bear God's son Jesus.

Not to be left out of the ongoing situation, in 1582 Pope Gregory XIII got an educated fellow to reform the Julian calendar with January 1 as the beginning of the new year again. Pope Greg then named it the Gregorian calendar after some guy he thought highly of, much like Julius did to the old Roman one back in his day. Turns out, Julius is the one who gave us Leap Years, but it took Greg's math geek to figure out which Leap Years got skipped so as to put us back on schedule with the sun.

Even though Pope Greg told all the Christians what day New Years fell on, it still took time to get all the different countries in line. France converted in 1564 with the Edict of Roussillion, Scotland in 1600 and Russia in 1700. Britain, Ireland and the British Empire waited until 1752 (Scotland evidently didn't want to be part of the British Empire in those days), while Thailand didn't come around until 1941. In the meantime, what date started your new year depended upon whether you had your date determined by the Easter Style, the Modern (or Circumcision) Style, the Annunciation (or Lady) Day Style or some other method. And, some ethnic groups still stick to their own calendars.

So, Friend, if you find some hesitation in your thinking about the what the date is during this new year, you probably come by it honestly. The first of the year date has long been subject to change in the past. Of course that same hesitation you felt could be due to the amount of Babylonian beer or Roman wine you consumed at somebody's raucous party. As for me, these days the wife and I tend to watch New Year's celebrations on either London or NYC time via television and then call it a night. Been about five years since we even bothered to watch the fireworks set off on top of Pikes Peak at midnight to mark the incoming year.

Hope you had a good one.