My article today is going to be a little on the lite side. Mea culpa, but let me explain.

Even though I have done this for five years now, the task is still daunting and preparation consumes a large amount of my time for a week or so prior to the course. This year’s teachapalooza was last Wednesday, and I flew back to Washington D.C. last Thursday. This would normally have provided me with ample time to pull together an article for Tuesday except for one little fact -- my wife and I were scheduled to leave Saturday for a family reunion in Nags Head North Carolina. And our beach cottage there has (believe it or not) no internet.

Everything, therefore, came down to Friday. And what you, faithful (I hope) readers have is a shorter entry this time around. So, what I thought I would do, within the constraints outlined above, is tell a funny back story about writing pastiches and, specifically, about writing my recent Ellery Queen story, Literally Dead, which appears in the December edition of Ellery Queen Mystery Magazine.

One of the hurdles involved in writing a pastiche -- at least a pastiche concerning a character, such as Ellery, who is still in copyright -- is that each story I write has to be cleared prior to publication by the heirs of Frederic Dannay and Manfred B. Lee.  Luckily for me submitting stories to the Dannay and Lee families is far from a burden -- they have always been accommodating and, more to the point, it has been great fun to get to know, and to exchange emails with, the likes of Richard Dannay and Rand Lee. This is something that, as an Ellery Queen fan for decades, makes my day.

But back to today's story.  As I have said on many occasions, I abhor spoilers. Nevertheless I’m going to tell you just a bit about what transpires in Literally Dead since the story that follows only makes sense if you have been forearmed.

To begin with, it hardy tells too much to point out that in every Ellery Queen story someone inevitably must bite the dust. No exception with mine. While that crucial (and lamented) central character takes a few pages in my story to be done in, if you have any background at all in reading “fair play” mysteries you will have seen it coming from the very beginning.  The story introduces a famous author, Jennifer Kaye Rothkopf, who has just completed the seventh, and (to the dismay of many) final, volume of a fantasy series that tells the story of a young man who has been educated in a famous sorcery school. As I said, you can easily guess what is going to happen to poor Jennifer.

When the story was accepted for publication by Janet Hutchings I sent it off, as usual, to RIchard Dannay, himself an intellectual properties attorney in New York City, so that he could share it with the other Dannay and Lee heirs for their (hoped for!) approval. In due course I received the following email from Richard:

Dale: Well done! I must say that your description of the murdered victim, author of the seven-book fantasy series involving a young sorcerer, led me to believe that you would be invoking the last two words of "The Adventure of the Seven Black Cats." Anyway, here's the agreement [allowing for the use of Ellery and other Queen-created characters]. If okay, just email back a signed and dated copy. Best. -- rd 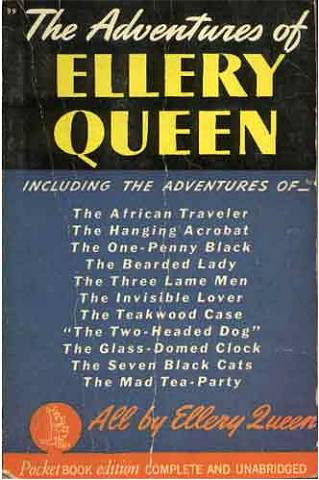 Okay. Even as someone who is sort of known for his supposed in-depth knowledge of the works of Queen I was completely stumped. I had only the vaguest memory of the story to which Richard referred. I immediately went to my Ellery Queen library and found the story, one of the entries in The Adventures of Ellery Queen, published way back in 1934. My copy of the short story anthology was no spring chicken itself -- the volume still had the receipt in it. I had purchased it for ten cents at a used book fair in St. Louis in 1961, when I was all of 12 years old.  I remembered reading the stories at the time, but not since. No wonder it had faded from memory.

I resisted the temptation to turn to the last page in search of the two words to which Richard alluded. Instead I sat down to re-read the story for the first time in 50 years. (Gad, I hate being able to say that!)

Suffice it to say this story, sadly, was not Ellery at his best.  It also featured more gore than the reader of a golden age mystery usually anticipates, including the serial demise of those cats. But I persevered, all the way to the last page.  And right up until the bottom of that page I had absolutely no idea what Richard was talking about. And then all became clear.

The last two words in The Adventure of the Seven Black Cats are “Harry Potter.”

Also deleted from this version is a reference to Conan Doyle's Sherlock Holmes works as being in the public domain.  That reference has been omitted in light of the continuing (and very interesting) litigation relating to the literary protections that currently are to be accorded to the Sherlock Holmes stories.

I had no idea that the Ellery Queen heirs still had to approve stories. Interesting and congratulations on another EQMM story!

Dale, although I'm certain you would have made it interesting, I'm glad you didn't give us a synopsis of the transportation course. I thoroughly enjoyed today's story and certainly didn't expect the two words to be "Harry Potter." I don't recall that story either, but I'll check it out.
Enjoy your trip to the Carolinas.

Dale, Congratulations on the EQMM appearance. I'm searching for my December issue now.

Against all odds I have found an internet connection in Nags Head!

Fran -- Last year I tried to write a column about my course in Denver and after a few days I chucked the whole thing. You are right -- a synopsis of the story of transportation development in this country doesn't work here. Ironic (of course) that they are willing to pay a lot more for that story than for the ones that ARE worth telling and talking about here!

That's a great story, Dale. Who could have seen that coming? Like Janice, I had no idea that you were in contact with the original EQ--wheels within wheels.

For those that have not read Dale's latest entry--do so! It's excellent!

Dale, sincere congratulations to you--and to David as well--for yet another EQMM story.

Dale, this has all the characteristics of what I would call a deliciously convoluted small-world story, except that part of the world involved is in print rather than real life and some of the characters are fictional.

Dale, enjoyed your latest story in EQMM. You've got some interesting connections.

Dale, I forgot to Facebook you and say how much I enjoyed your latest E.Q. story in EQMM. "Harry Potter?!?" As we say on Facebook: OMG!!!

Are there any plans to collect all your Queen pastiches? Enjoyed this month's. Wondering how I can track down the earlier ones...

Joe -- The pastiches I have written have never been collected here, although "The Book Case" appears in a Japanese anthology entitled "The Misadventures of Ellery Queen." For some time I have toyed with the idea of trying to put together an English language anthology of Ellery pastiches -- besides the three I have written thus far there are others by Mike Nevins, Ed Hoch and Jon Breen (as well as others) that could fill a volume. Particularly with the advent of epublication this might be possible in the future. Until then the only way to secure copies of "The Book Case," or "The Mad Hatter's Riddle" is by purchasing the EQMM issues they appeared in directly from Dell. There is a back issue option on the EQMM web page, though I have no idea whether the relevant issues are in fact available.