The Night of The Generals


by David Edgerley Gates
Not that many movies begin with a guy hiding in a stairwell toilet, peeking through a crack in the door. Warsaw, 1942, the German occupation. A whore is murdered. A major in German intelligence is called in by the Polish police, because the case may have unhappy political considerations. The girl was a German informant. Oh, and the guy in the toilet? He saw somebody coming down the stairs, but he can't identify him, because all he saw was the lower half of a Wehrmacht uniform, with a red stripe down the leg. It happens only German generals wear the red stripe. 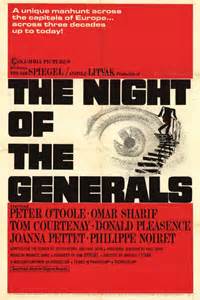 Three of the generals posted to Warsaw have no explanation for where they were on the night in question, and Major Grau of Intelligence takes it on himself to narrow the field of suspects. His immediate subordinate, a captain, asks him why it matters who killed the girl, a nobody. Grau asks him in return, Have you ever heard of the Eumenides? Grau's point is that even a whore's lonely death, unrevenged, will call down the Furies. One of the suspected officers, General Tanz, makes the explicit counterargument, later in the picture, when he says, Why should this woman's murder attract any attention at all?---our century has seen millions of deaths more horrible than hers. From this perspective, the moral question is one of degree.

NIGHT OF THE GENERALS is compelling not because of the mystery---it's pretty transparent from the get-go which of our guys is a nutjob---but because it's about a murder in wartime. Everything plays out against the worsening backdrop of Germany's coming collapse, from Warsaw in '42 to Paris in July of '44, after the Allied landings in Normandy, and everybody's got something to hide. One of the major plot strands is the conspiracy in the German high command to assassinate Hitler, for example. This raises the stakes considerably, and while you might not agree with General Tanz, and his moral relativism, you can see where he's coming from. With defeat looming, who seriously cares about dead whores? (There's more than one victim as the movie goes on. It turns out there's a serial killer on the loose.) And the dogged military cop, Grau, keeps getting the brush-off, swatted away by higher ranks, and reassigned because he's a nuisance. Not necessarily by the murderer, either. That's where the real mystery lies, not in the homicide investigation itself, but why all these people are so determined to throw Grau off the scent.


The picture uses an effective structural device, which is basically a frame story, although that's not immediately apparent, since it begins in media res, but then it starts to shift back and forth in time, between the war and the present day---the present day being twenty years later. This allows people to comment on the events of the past, as you see them in flashback, or flash-forward, and often enough, they get it wrong. So there's an element of unreliable narrative mixed in. You don't know whether to trust the witnesses. Their memories may be corrupted by dubious loyalties, or simply self-serving, or they're still protecting old secrets.

Lastly, although this is perhaps parenthetical, when I first saw the movie, in late '67, I think it was, I'd been in Berlin almost two years, and one of the things I thought the picture got dead right was the German habit of mind. In particular, the way the Germans chose to to think about the war, or more to the point, the way they chose not to. In one scene, a veteran officer, now managing an automotive plant, laments that the Wehrmacht might have been able to stop the Allies, if the Army hadn't been stabbed in the back---as usual, he adds. This is willful disbelief, and a denial of history.  In another instance, an aging general is writing his memoirs, and he's gotten as far as the July 1944 plot against Hitler. He remarks that one has to be circumspect, so as not to re-open old wounds, particularly, he says, since so many of the convicted war criminals are now being released. This beggars imagination. Most people, on the other hand, can't be blamed for wanting to reinvent themselves, or be cast in a better light. For example, the French, everybody secretly in the Resistance, and nobody a willing collaborator. Or the Russians, or the Brits, or the Japanese, or us. Americans conveniently forget how strong the isolationist sentiment in this country was, before Pearl Harbor, and how many people thought Hitler was right about the Jews. In this sense, then, NIGHT OF THE GENERALS is subversive. It chooses both to forget, or to blur memory, and at the same time to serve as a sharp reminder, that only some of us are guilty, but none of us are innocent. No less than the Germans, we congratulate ourselves on learning the wrong lessons. No matter how this turns out, Rommel says, talking about the soon-to-fail July plot, history will judge us as patriots, or traitors.

At the end, though, NIGHT OF THE GENERALS does in fact turn on justice for those murdered whores, and there's some small satisfaction in that. In spite of its large canvas, and larger issues, the picture manages to keep a tight focus, and the Furies are held at bay. Or as Stalin is said to have remarked, one death is a tragedy, millions are a statistic.