Some of you might have caught the Nova show a week ago on the Antikythera mechanism, a device from approximately 100 BCE found in 1901 in a Greek shipwreck near the island of Antikythera.  It is the world's oldest (yet found) working analog computer:


and it generated complete astronomical information and forecasts:  sun, moon, planets, and eclipses, from now until...  whenever.  A very complex machine.  It's assumed the found object was a factory reproduction of an original designed by the great Syracusan mathematician, Archimedes.  In the process of discovering all of this information, the historians used all sorts of mystery-solving techniques - questions, x-rays, research, reconstructions, debates, etc. - to try and figure out what that super-corroded device was, what it was for, and how it was made.  Fascinating.  Catch the reruns, or rent the DVD.

And it explains why so many of us historians are also mystery fans/writers/etc.  Because history is all about solving mysteries, very cold case mysteries, with limited evidence, almost no eye-witnesses, and a whole lot of deduction.  Yes, a lot of people think that history is nothing but names and dates, but I can assure you that's the least of it - the historical equivalent of a GPS system, keeping you afloat in a vast sea of time.  But the real purpose for history is to find out how things got the way they are. History is all about solving the mystery of us.

Of course, some things never change: human nature (curiosity, greed, anger, pride, love, lust, all the emotions and desires), and what comes of that human nature (the pursuit of power, pleasure, wealth, appetite, and occasionally peace).


Some things change dramatically, in a paradigm shift that makes it inconceivable (to us) that things were ever different:  our modern concepts of privacy, romance, childhood, individual rights, and personal comfort are all just that, MODERN concepts. Romantic love used to be considered a form of mental illness (read Chaucer).  What we call privacy used to be proof that you were either had no status or were in prison (who would ever be alone if they didn't have to be?).  Rousseau practically invented modern childhood in "Emile" (ironic, considering that he put each of his four children in an orphanage).  And most societies have always been willing to sacrifice individual rights for societal order, especially if it keeps the barbarians (within and without) at bay.

And some things change all the time, especially fashion and beauty, which are simply exercises in the verb "to change".

Where does technology fit into this?  Well, I couldn't help noticing that, even on Nova, the scientists were constantly amazed at the complexity of the Antikythera Mechanism, and the ingenuity of the ancients.  And this is a classic example of one of the two great biases that historians face, within themselves and within their students/readers/society:
BIAS # 1.  Time is an arrow, leading to us, and we, right now, are living in the best of all possible worlds at the best of all possible times, and anyone in the past who didn't live the way we do, especially in terms of morality, government, technology, and religion, were stupid, not to mention just plain wrong.  A major subsection of this bias against our ancestors' intelligence is all about technology.  I cannot tell you the number of people who say, well, if the ancients were so smart, how come they didn't come up with the technology of today? The answer is to consider where and how technology was used in the ancient world: 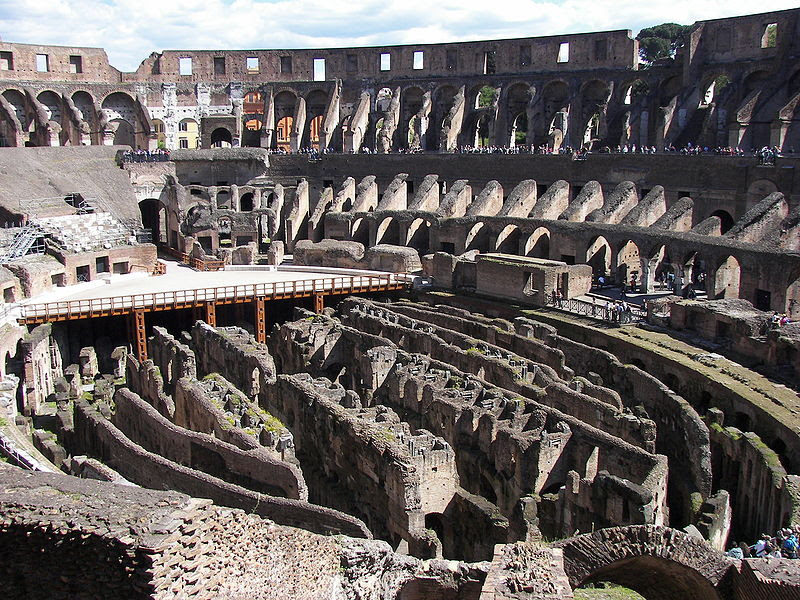 Sounds pretty modern to me...
The other major bias is the exact opposite:

BIAS # 2.  We are a degenerate and weakened species, and things used to be much better, back in... well, the Greeks believed in a Golden Age before their own Age of Iron; the Hindus for millenia have believed we are in Kali Yuga, the age of the demon; and today a surprising number of people like to tell me how much better things were in the 1950's (and I suppose they were, if you weren't a woman, gay, black, or other minority).
My general analysis of bias holders is that the first is primarily held by the young and/or successful; the second is primarily held by older people and/or those who feel throttled by present-day culture (whatever the present day is).  My other great observation is that either bias gives you a perfectly logical reason to ignore the past.  They both imply that we can learn nothing from the past, either because we are absolutely superior or infinitely inferior.  Either way, we are on our own.  Me?  I know that everyone who ever lived were just as human as I, and the basic lesson of the past is that, until human nature changes as completely as fashion or song stylings, history is going to continue to be the same damn thing over and over again.  We'd better start paying attention.

Another Nova fan!
that was a fascinating show.

Wonderful post, Eve. I can't help believing that things in 2013 in America are better than they've ever been for women (unless you were one of a handful of ruling-class women in the mainstream culture of wherever you lived). But other than that, we are failing dismally to learn from past mistakes.

I meant to watch that show, doggone it. I am currently reading Red Land, Black Land by Barbara Mertz, alias Elizabeth Peters. It is a book about every day life in ancient Egypt. Staggering that we know the name of the architect of the step pyramid which is almost 5000 years old.

Beautifully done! Makes me think of Stephen Jay Gould's book "Time's Arrow, Time's Cycle",which addresses the time-as-arrow paradigm in geologic as well as historic terms. (But you have done it much more succinctly and quite as well, I think!) It also makes me think about the arrogance of Jared Diamond's introduction to "Guns, Germs, and Steel" when he blithely asserts the "fact" that Western culture is better than non-Western cultures because of technology and material prosperity. It leaves you wondering if the definition of "successful" doesn't itself determine the outcome of our rating system. I always enjoy your posts, but this one is particularly good.

Eve, you used my word for this column in it--fantastic!
I didn't see the show, but I'll definitely rent the DVD, and not only watch it, but share it with my grandson.

As almost everyone knows, my grandson is now thirteen. What not everyone knows is that his burning desire in life is to be a historian. I'll be sharing your blog with him this afternoon.

Thank you all. Liz, I told my female students that they were living in a very unique time re women's rights - and to never, ever take it for granted, because it could evaporate as quickly as it coalesced. (History the same damn thing over and over...)

Anonymous, I have MAJOR issues of Jared Diamond, as do many historians. While he's correct about domesticable animals and plants being rare in many parts of the world, the whole "West" thing is ridiculous, and ignores the wealth, power, and prosperity of China, among others.

Excellent post, as usual, Eve. I think your writing here ought to be required reading for any number of subsets of fiction readers (those who indulge in historical reading as little more than costume play, for example).