From FARGO to ARGO

Question: What does it take for a movie to be nominated for an Academy Award for Best Picture? If I were doing the selecting, the main requirement--maybe the only requirement--would be entertainment value. But that is of course not enough; any of us who follow movies know that Best Picture contenders should also have at least some of what we might call "literary" merit. In other words, they should be illuminating as well as entertaining. (Sometimes they apparently only have to be illuminating, period--but I won't go down that road today.)

A requirement for actually winning Best Picture is usually that the film has already, several minutes earlier in the ceremony, also captured the Oscar for Best Director. The two awards often go hand in hand, and only four times--including the Oscar ceremony held earlier this year--has a film won Best Picture when it was not even nominated for Best Director.

What I'm leading up to here is that the other night I finally watched, for the first time, the movie Argo, and saw what all the fuss was about. And let me say right now, I thought it deserved its Best Picture Oscar. In my opinion, Ben Affleck should also have won for Best Director. I have no idea why he wasn't even nominated, but--again--that's a different matter.

Another question. Assuming some of you would agree with me that Argo was a good film, what was it that made it so good? There are many possible answers here: the script, the performances, the cinematography--all of those were extremely well done. But I think its strongest point was its level of suspense. (Which, to me, translates into "entertainment.")

How to do a howdunit

Argo is not a mystery/crime story. It's a story about a plot to rescue a group of embassy staff members from a foreign country, under the very nose of a hostile government, by pretending that they are members of a film crew planning to shoot a fictitious movie. That premise itself was fascinating: Hollywood working undercover with the CIA? But what made the story great was the tension, the anticipation, the fear that these people might be discovered and captured. Failure in this case would have meant certain death--probably death by torture--and there were many, many different ways that what they were attempting could fail. The final twenty minutes of the movie involved some of the best armrest-gripping, sphincter-tightening suspense I've seen in a long time. 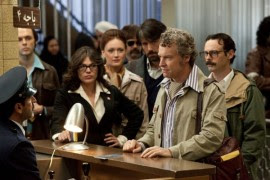 Part of this was the old "ticking clock" technique. At one point the escapees were at the airport and their plane was about to leave, and if it left without them they would die. They realized it, and we as viewers realized it. If the ticket agent at the counter couldn't find the reservations that the Washington folks had supposedly made for the group, the hero and all the people he was trying to rescue would die. If the telephone didn't get answered quickly enough in Hollywood when the Iranian security officer phoned the fake number to check the escapees' fake story, they would all die. If any of those being questioned about their phony identities/jobs/backgrounds didn't respond correctly and promptly and convincingly, they would all die.

Adding to this feeling of tension was the fact that we had come to know and understand and sympathize with the characters--especially those in the CIA who were risking everything to try to bring the good guys home. And the familiar setting didn't hurt. Few of us have been to Iran, but all of us have been in airports at one time or another, wondering if we'd make our plane.

Another plus was that the writing was excellent. Here are a few (paraphrased) examples of the dialogue:

CIA guy: There are only bad options. It's about finding the best one.
Official: You don't have a better bad idea than this?
CIA boss: This is the best bad idea we have, sir.

CIA boss: If you want applause, you should've joined the circus.
CIA employee: I thought I did.

Movie guy: Okay, you got six people hiding out in a town of what, four million people, all of whom chant "Death to America" all day. You want to set up a movie in a week. You want to lie to Hollywood, a town where everybody lies for a living. Then you're going to sneak 007 over here into a country that wants CIA blood on their breakfast cereal, and you're going to walk the Brady Bunch out of the most watched city in the world.
CIA guy: Past about a hundred militia at the airport. That's right.
Movie guy: Look, I gotta tell you, we did suicide missions in the army that had better odds than this.

One thing surprised me a bit. I was afraid that since this story was based on real events, and since most of the viewers already knew (via either media hype or a good memory) what would eventually happen… that could be a disadvantage. It turned out it wasn't. Prior knowledge of the outcome didn't hurt Titanic, Seabiscuit, The Perfect Storm, or The Day of the Jackal--and it didn't hurt Argo either. What kept it interesting was the storytelling process itself. Even so, it's no small feat for moviemakers to keep an audience properly worried for more than two hours about the ending when the audience already knows the ending.

My point, if there is one to be made, is that we mystery/suspense writers can learn a lot from movies like this. What did the writer and director do to make us care deeply about the characters? How did they make us want so badly for the protagonist to succeed? What did they do to make us so concerned that he might not? How did they manage to tell a humdinger of a suspense story without making it an "action" story?

I can't help mentioning here that for years it seemed that the two Good Will Hunting guys had gone off in separate directions: Matt Damon was making all the right career decisions (Saving Private Ryan, The Talented Mr. Ripley, Ocean's Eleven, The Bourne Identity) and Ben Affleck was making all the wrong ones (Reindeer Games, Gigli, Paycheck, Jersey Girl). Then, somewhere along the way, Affleck started doing things like Hollywoodland and Gone Baby Gone and State of Play and The Town. Now, he's widely recognized as one of the best directors and actors around.

In closing, I would rank this movie right up there with other Best Picture "suspense" winners and nominees like No Country for Old Men, Fargo, L.A. Confidential, Mystic River, The Departed, The Green Mile, and The Silence of the Lambs.