Two days ago, March 2, 2013, was the anniversary of the birth of someone who inspired me tremendously in my writing efforts--someone who has played a varying role throughout my life.

I've always loved disguises and costumes.  When I taught secondary English, I used to dress up as Lady Macbeth and deliver the "Out, out cursed spot," passage to interest my students in beginning the study of Macbeth. Seuss's work provides many opportunities for costumes.

Some might think that Dr. Seuss's material is too young for fifth graders, but they loved it, and we explored all kinds of books and poetry including Shel Silverstein and Edgar Alan Poe. Seuss's work also served as inspiration for writing and illustrating the students' own books.  The class wrote and illustrated  a group project called The White Haired Man with the same meter and rhyme scheme as Green Eggs and Ham.
﻿﻿ 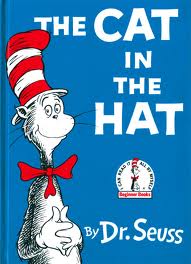 When I demoted myself from secondary English to teaching fifth grade, we made a big deal out of March second each year.  I'd wear my Cat in the Hat costume and my students would make and wear costumes for other characters.  A baker friend and I made a gigantic four tier birthday cake styled like a wedding cake decorated with Seuss characters.  My students hosted every other class in the building to our room by scheduled invitation.  While there, the younger students celebrated Dr. Seuss's birthday by eating cake, drinking juice, and listening to my fifth-graders read Dr. Seuss books to them at reading centers around the room.

We also did a following directions lesson on St. Patrick's Day that involved preparing and eating green foods.  We drank green Kool Aid and ate green deviled eggs and ham, green peas, green beans, asparagus, green spinach (a little Popeye strength), and other green foods the parents provided, along with cooking instructions, for the children to prepare.  Since I lived and taught in the South, we also had green grits, but the students' favorite green food each year was green Rice Krispy Treats.  We read Green Eggs and Ham at that lunch.  Our math lesson that afternoon concentrated on converting measurements we'd used that morning into metric.

﻿The biography of Dr. Seuss is repeated many times in different places on the Internet, so I won't inflict that on you.  Google it if you want to know how he was kicked off the magazine staff at Dartmouth College for drinking in his dorm room (it wasn't green Kool Aid either), quit future studies at Oxford University and returned stateside with his recently married wife Helen; and became a cartoonist, then an advertising director for Standard Oil for fifteen years.

You'll also read that he and Helen bought and moved into an old observation tower in La Jolla, California, where he wrote for a minimum of eight hours a day.  A major turning point in his writing career came when he was asked by Houghton Mifflin and Random House to write a children's book with a limited vocabulary of 220 words.  Seuss's The Cat in the Hat was published in 1957, and the rest is history. 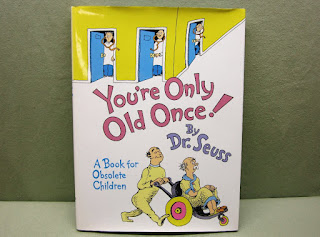 At my retirement luncheon, the school presented me with a fancy desk clock and a book.  The book is Dr. Seuss's You're Only Old Once which is one of his few books not written for children.

I've enjoyed reading Seuss to my sons, grandson, and students through the years, but the event that makes me so fond of him happened on my last day of teaching.  Kim, a delightful ten-year-old approached me just before the school buses rolled.

"Ms.Rizer," she said, "didn't you say you're going to write a book now that you're retiring?"

"Well, don't get discouraged if it takes a while to get it published.  Dr. Seuss's first book was rejected twenty-seven times before it was published in 1937."

"Have you been watching ETV?" I asked.

Her bus number was called over the intercom, and away she went,  I looked it up.  Kim was correct.  Dr. Seuss's first book, And to Think that I Saw It on Mulberry Street, was rejected twenty-seven times before being accepted by Vanguard Press.  I use this fact in my book talks when I remind potential writers that music executives told Elvis Presley to go back to driving a truck in Memphis when he went to Nashville and that several American recording labels turned down the Beatles before they made it to "the reeely big shew."  These facts fit with my theory that talent and craft skills are important, but possibly the most important characteristic for success is perseverance.

When I looked up Dr. Seuss to obtain illustrations for this blog, I read something about him that disappointed me tremendously. Be the first to guess what it is in Comments and I'll send you a free copy of my next Callie book, Mother Hubbard Has A CORPSE IN THE CUPBOARD when it's released in April.

Aside from the above-cited fact, I tip my red and white striped hat to Theodor Seuss Greiss!