by David Edgerley Gates
Hey folks!  Rob here to tell you we are pleased as can be to welcome a new blogger to the second Wednesday of the month slot.  David Edgerley Gates lives in New Mexico and has had a ton of stories published in Alfred Hitchcock's and Ellery Queen's Mystery Magazines.  His work has been  nominated for both the Edgar and Shamus Awards.  He is probably best known for his "noir westerns" about Placido Geist.  We look forward to hearing from David for many months to come...

John Buchan is probably most celebrated and best remembered for THE THIRTY-NINE STEPS, and more for the Hitchcock picture, not the novel itself.  (It’s a good movie, even if Hitchcock changed the ending of the book.)
Buchan was an interesting guy, who served in the Boer War and was actually a spy, later, in the First World War.  He was ambitious in politics, but too liberal for the Tories, and too conservative for Winston Churchill---like Churchill, he was mothballed between the wars---and eventually wound up Governor-General of Canada, a more or less ceremonial post.  He died in 1940.

Aside from THE THIRTY-NINE STEPS, he wrote some three dozen novels, some of them thrillers, many of them historical romance.  His titles were terrific, THE BLANKET OF THE DARK, THE GAP IN THE CURTAIN, A PRINCE OF THE CAPTIVITY, a book I always thought to be about Lawrence of Arabia.

He wrote them fast and loose.  He called them penny-dreadfuls, or ‘shockers,’ and they were, depending overmuch on coincidence and accident, but they have enormous momentum, and on occasion genuine emotional power: the scene in MR. STANDFAST, for example, when Hannay encounters the Kaiser himself on a train platform, and sees the man, weighted down by his responsibility for this cruel folly.  Buchan understood the primary job of a storyteller, don’t spin your wheels.

THE POWER HOUSE was published in 1916, a few years into the war.  The character of the villain is almost certainly influenced by Nietzsche, as is, we might well imagine, Professor Moriarty.  Conan Doyle and Buchan, as well as Kipling, another extremely invested writer, in the sense of believing deeply in the social fabric, although Kipling was by far the better craftsman, were conservatives of an older order, keepers of the flame.

THE POWER HOUSE could be seen as a parable, but I don’t believe Buchan meant it that way.  A century later, a century that saw Hitler and Stalin, delusional maniacs who murdered millions of their own people, and many others, the book is still frightening in its prescience.  Buchan’s frame of reference, though, is different from ours.  We know the slaughter of the Great War, the Holocaust, or the genocides of Africa and the Balkan wars, so we look at a novel like THE POWER HOUSE, or PRESTER JOHN, through a lens of historical irony.  Buchan was in ignorance of the horrific future.  But he saw it in its lineaments.  THE POWER HOUSE is Hitler, unfortunately not strangled in birth, Yeats' rough and slouching beast.  Buchan had the gift, or curse, of foresight.  Cassandra, unheeded. 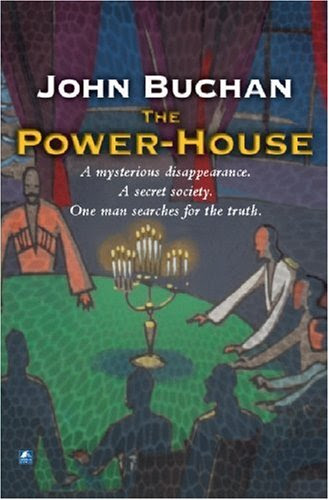 THE POWER HOUSE, essentially, is about a guy who doesn’t think the rules apply to him.  This basic model of the sociopath is a character Buchan anticipated well before Hannibal Lecter, but one we’ve come to know.  Buchan, and Conan Doyle, got in on the ground floor.  Fu Manchu, or Dr. Mabuse, came on stage later, and they were avatars of an evil that could already be seen, off-stage.  The genius of THE POWER HOUSE lies in imagination.  The brute force of reality caught up with it.  Buchan saw the Fascists and Nazism lying in wait, tinder waiting for a match.  He was a voice in the wilderness.

John Buchan, or Arthur Conan Doyle, or Rudyard Kipling, might in all justice be called apologists for British imperialism.  I don’t think, however, that they countenanced a philosophy that led to the death camps.  Yes, the Boer War, which was a slippery slope, with the British the first to embrace internment of non-combatant women and children.  Buchan was there, one of Milner’s acolytes.  Perhaps it suggested something else to him, that this way lies madness.  And it did.

Much of Buchan’s work dates badly, because he’s essentially a 19th-century guy, with a late-Victorian cultural and emotional mindset.  There’s little graphic violence in his stories, and of course no sex at all.  But the men of his generation came to be marked by the Great War, with its unthinkable slaughters, Ypres, the Somme, Verdun, the introduction of tank warfare, the use of poison gas.  There were inspiring heroics, but at horrific human cost.

The world that came after, as Paul Fussell points out, was very different, different in both temperament and imagination.  The key to THE POWER HOUSE is that Buchan foresees not the horrors to come, or even their political foundations, but the fertility of an individual capacity for evil, the earth from which the dragon’s teeth would spring.
Posted by David Edgerley Gates at 00:01

David, welcome! I enjoyed reading about John Buchan, as I wasn't familiar with his work. Do you have any connection to the Gates family in SC? My maiden name was Gates.

Good piece and glad to have you on board!

Welcome aboard, David! Great article. Personally, I read a lot of H. Rider Haggard when I was a kid, and when I reread some a couple of years ago... well, those 19th century boys do date badly - except (IMHO) Sherlock Holmes who lives in such a sealed world that I think he's the great exception.

I saw the film version of "39 Steps" but never read any of the author's work. You wrote an informative piece which I enjoyed reading. I agree that many earlier writers simply don't hold up well for modern readers.

Thank you all. @Fran: my family hails from Ohio, actually. @Eve: soe of them stand up, some of them don't (Edgar Rice Burroughs, say, is pretty much unreadable), and Holmes is in a sense sui generis. @Jacqueline: I didn't mean to condescend to THE 39 STEPS (the Hitchcock) which is a terrific picture; there was also a BBC or A&E series adapting four or five of the Richard Hannay books.

One fan of Buchan's was apparently George Smiley. In John LeCarre's books heoccasionally used names from Buchan as pseudonyms, like Mr. Standfast. Or maybe LeCarre was making an ironic contrast...

@Rob: I think probably meant ironically. LeCarre wrote a preface to a book about Philby and the Cambridge spies some years ago, and he says something to the effect that back when Philby was recruited by SIS, that their tradecraft was like that of John Buchan's day, e.g., "You may be asked to do things a gentleman might prefer not to...," and so on.

Nice piece, David, and welcome aboard.

One of my secret desires is, at the end of a lecture when the speaker asks if there are any questions, to stand up with a crazed look in my eyes and yell "Yes! What are the 39 steps?"

@Dale: This is a device Hitchcock used more than once. He loved performance, burlesque, clairvoyance (as an act), and anything like, and of course his pictures are nothing if not "staged." In the novel, the thirty-nine steps are literal: which of the stairs leading down to sea have only thirty-nine? I think Hitchcock actually comes up with a more elegant solution to the mystery.

David this is a great and informative piece. Warm welcome to the Sleuth Sayers.

I don’t believe I’ve read any Buchan. But, from the way you describe him, via contemporaries, I think he must be right up my alley. A trip to the library this weekend!!

I rather like period works and try not to judge by today's standards… Lord knows modern authors can make awful muckups.

As you say, WW-I affected an entire generation, understandable as it changed the face of politics and power around the globe. I've sometimes thought Britain spent its young men in war with wanton disregard.

@Dix: Check out some of his historical novels, if you can find them, MIDWINTER, or THE BLANKET OF THE DARK. If not, then one of his thrillers, THE THREE HOSTAGES is terrific. Or JOHN MACNAB, which is kind of s burlesque. I don't think you'll be disappointed.

David, glad to have you with us. I just finished reading BLOOD MONEY and enjoyed your series featuring Placido Geist. "Crazy Eights" is next up in AHMM's October 2012 issue.

@R.T. Thank you very much. I just in fact wrapped another bounty hunter story. And the October issue of AHMM is available now, I believe. All the best.