Almost every time I talk to a group about writing and get to the Q and A portion, I’m asked, “Where do you get your ideas?”

I have a couple of stock answers which usually get a laugh. One is: “I belong to ‘Ideas of the Month Club’ and they send me ideas once a month.” (I think I stole that from mystery writer, Les Roberts.) The other is: “I just go to “Ideas R Us” and buy one when I need it.” (Am sure I stole that from someone, too.)

My own real answer is: Ideas are in the air, all you have to do is pull one down when you need one.

I wrote two short stories that were inspired by songs. One story was “Scarlett Fever” in the Deadly Allies II anthology and my inspiration (idea) came from a song by Kenny Rogers, titled “Scarlett Fever.” In the song, this guy kept going to a club to watch a dancer named Scarlett and fell in love with her. One night he goes to the club and she’s not there anymore and he’s devastated. My idea was: what happened to this girl? Did she really leave for brighter lights as the club manager says or did something bad happen to her?

My second story is “Deathbed Confession” based on a song by a local Texas writer, Thomas Michael Riley. I can’t really say much about the song without giving away some of the story but it will be published next spring in ACWL Presents: Murder Here, Murder There. This will be the first Jenny Gordon, C.J. Gunn, story in several years and it was nice to find out how the female private investigators were doing. Nice to know that G & G Investigations still is in business. Murder Here, Murder There is the second anthology written by the members of the American Crime Writers League and is co-edited by R. Barry Flowers and myself and published by Twilight Times.

Another story was inspired by a name. A friend of mine, writes a newsy-about-town column in a local weekly newspaper and she writers under the nom de plume of “Ima Snoop.” I thought the name was funny and asked permission to use it in a story called, “The Crimes of Miss Abigail Armstrong.” That story is in the first anthology, from Twilight Times, written by ACWL members and co-edited by R. Barri Flowers and Jan Grape. 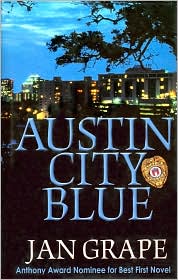 My Austin policewoman series was inspired by taking a ten week class, Austin Citizen’s Police Academy training which was offered by the Austin Police Department. In these classes we learned about different departments such as fraud, firearms, robbery homicide, SWAT, etc. After the training was over, I was involved in the alumni association and went out to the academy on numerous occasions to assist in the new cadet training. Training offers set up scenarios using alumni graduates as bad guys and the cadets would have to participate and discover the crime or non-crime committed. Cadets learn how to use their computers, the patrol car’s siren, their walkie-talkies and to quickly access a situation and act accordingly. That was fun because I got to role-play as a bad guy, which soon led to a voice I kept hearing in my head. Fortunately, I began writing Zoe Barrow’s story in Austin City Blue, published in 2000 by Five Star and wasn’t hauled off in a strait-jacket by the guys from the funny farm. 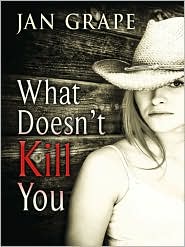 My latest novel, What Doesn’t Kill You, came from seeing a little girl with ears that stuck out like open taxi doors, who was in a bookstore with her grandfather. She wanted to buy a magazine, but gramps said they couldn’t afford it. Somehow that little girl stayed in my mind and eventually became the sixteen year old, Cory Purvis, in that book.

Just yesterday, a friend asked me to do some research on sleepwalking for her. Who knows– I may come up with a character who kills when sleepwalking or so he/she claims.

Today I read a short article in my Sunday newspaper about people selling lollipops which have been licked by children with chickenpox. The buyers are people who don’t want to vaccinate their children but want them to catch the childhood disease. People could go online and look for: 'Find a Pox Party In Your Area' the article said. Cost was $50 a pox-licked lollipop. The sellers are selling these all over the country, sending the candy by mail. Sending diseases and viruses by mail is a federal crime. So some arrest have been made and prosecutors warning parents. Can you imagine giving your child a lollipop, supposedly with chickenpox virus on it? What if it were AIDS virus, or hepatitis? What if it were a more deadly lollipop like Anthrax or something similar? That news article idea sounds like a great plot for a book and I’ll bet we’ll see that used in one very soon.

Newspapers, TV news reports, TV shows, songs, books or stories by other writers, something read on the internet all can give you ideas. So in my humble opinion, ideas are everywhere and all you have to do is pull one down. As a last resort, just go to the mall to IDEAS R US and buy an awesome idea.
Posted by Jan Grape at 00:01

The idea of the lollipops strikes me as freaky, but I suspect the concept is quite old. Eerie, but I have to imagine it's done out of love.

Jan, you've given us many great ideas. Story sources are indeed all around us. I want to read the story that developed from the big-eared girl. Chicken pox can have some serious side effects. I would never intentionally infect my child when it can be avoided, but I can think of lots story ideas springing from that.

Perhaps you should start an IdeasR US by email!

In my youth I recall, on various occasions being herded, along with my siblings, to the homes of friends who had chicken pox, measles or mumps. I think the idea was some illnesses were less sever if caught early, and helped build immunity in case of repeat occurrences.
We all lived to tell the tale. Probably be had up for child endangerment today!