It's time to return to crime news, starting with Halloween.

Knightstown, In.  This little burg is a few minutes over country roads from the village where I went to high school. I recall being amused at the 'aptonym' of a local business, Butcher's Mortuary.

A local family isn't amused after moving into their house and finding an attic with scalpels, surgical scissors, bone saws, and… bones. And skulls. And lots of creepy stuff like embalming fluid. WoooOOOooo…

Ribeirao Preto, Brasil.  Brazilian police waxed heroic as they took down a Cessna full of smugglers with their car. The video below is plane adrenaline.

Chicago, IL.  I've been seeing ads for 'clean coal'. Color me darkly skeptical. My grandparents and my old school burned coal and trust me… there's nothing at all clean about coal. Be that as it may, Greenpeace protesters rappelled down from the Pulaski Bridge and dangled in the paths of coal barges to prevent passage and climbed smokestacks to paint the message QUIT COAL on outdated and unsafe coal-fired plants.

I'm not unsympathetic to Greenpeace, but I award Chicago Police the prize for humor. Officers charged protesters with misdemeanor 'reckless conduct' and 'performing an aerial exhibition without a net'.

Houston, Tx.  Forty-one years after a Texas woman killed her husband by dousing him in hot grease, police and prosecutors succeeded in tracking Mary Ann Rivera down and bringing her to trial. However, Judge Mary Lou Keel dismissed charges, saying too much time had elapsed.

Strange… Texas is usually so hot to fry perpetrators.

Showing a Bit of Ankle

Paulding County, Ga.  The dumber-than-a-box-of-rocks-off award goes to a Georgian man, a 'high-risk' sexual offender. When police received reports of a dude exposing himself, they simply matched the GPS and time-stamp on his ankle monitor with the time and place of the crime scene.

Attached GPS… It's a no-brainer.

Fort Dodge, Ia.  Hang on, because this is convoluted. The gist is an Iowa woman, who apparently has a history of fraud in Colorado, Illinois, and Nebraska, concocted a scheme to frame her ex-husband (who'd twice accused her of trying to kill him) by murdering a neighbor and staging a botched home invasion. Her lawyer claims she's just an innocent little ol' victim of police prejudice.

On second thought, I'm not going to try to describe it. Click on the heading above and decide for yourself.

Des Moines, Ia.  I don't know what it is about Iowa, but police charged a Des Moines woman with arson after she was defriended by another woman on Facebook. The other woman and her husband barely escaped with their lives, awakened around 1AM by a boom as their garage collapsed.

We pretty much guarantee there's no hunk-a-hunk of burning love lost.

Edinburgh, Scotland, UK.  I wrote about Gary McKinnon last December. He has Asperger’s syndrome, an autism spectrum disorder, combining limited mental capacity with OCD. Gary got a bee in his bonnet that the US was hiding files on secret free-power sources and UFOs. Unfortunately, he hacked into something like 100 US Army, Navy, Air Force, Defense Department, and NASA computers searching for such information. As the military and NASA readily acknowledge, he didn’t vandalize and he may not have stolen anything. Nonetheless, our government is insistent he be brought to the US and prosecuted, where he could spend the rest of his life in prison.

Gary has great sympathy within the UK and even the US, the computer community, and those who understand such disorders as Gary’s. Two British Prime Ministers and the British ambassador asked Ambassador Hillary Clinton to seek US forbearance. A recent legal review has not found a legal reason to abide with the extradition treaty with the US.

There's a twist. According to WikiLeaks, the White House is not in a forbearing mood, still angry with Scotland’s release of convicted Lockerbie bomber, Ali Abdelbaset al-Megrahi, subsequently welcomed home by Libya. This may not be the best time to ask, but it appears nothing will be gained by locking McKinnon away in a US prison.

Jefferson County, Pa.  In black-on-black (clothing) violence, a rebel group of Amish men have been breaking into homes at night and snipping off the hair of other men (and a 13-year-old girl, if news reports are to be literally believed). "Who knows where it's going to end?" mused the task force lead, Sheriff Fred Abdalla.

The suspects are followers of… wait for it… Sam Mullet.

Erie, Pa.  A car thief, possibly an illegal alien, stole a car and then returned it with a note of apology, written in Spanish. If you have information about a polite car thief, call Police Officer Stu Harrison at 717-225-1333 ext. 111.

Nizhny Novgorod, Russia.  Police found more than two dozen female corpses dressed much like dolls in the home of historian Anatoly Moskvin. Wait, it's not what you think– Moskvin didn't make them corpses, he dug them up.

His parents reported him. Apparently Moskvin has the odd hobby (what they call 'hobby' we call crazed obsession) of visiting at least 750 graveyards in the, er, dead of night to, em, dig up a date. 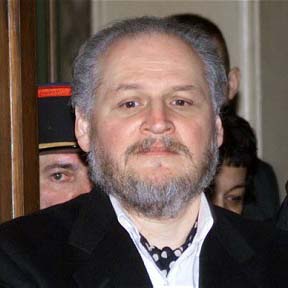 Carlos, aka Ilich Ramirez Sanchez, is back in court to answer charges of four additional bombings stemming from the early 1980s, bombings that wounded 200 and killed eleven. In protest, Sanchez wages hunger strikes which, from his chubby cheeks, appear to last no more than twenty minutes, as if anybody cares.

Somewhere, USA.  This story is about a former neo-Nazi and his wife who are so dedicated to reforming, he endured months of pain and shame. Associated Press correspondent Helen O'Neill wrote about it so well, I can't improve upon it, but if you haven't read her article, I strongly recommend it.


Until next week, stay out of the news.
Posted by Leigh Lundin at 00:01