David’s column two weeks ago got me thinking about my summers on the shore as a kid; in particular how a buddy and I used to don raincoats on foggy days and stroll down the beach roads, imagining ourselves to be private eyes in London, San Francisco, or some other suitably mysterious place. Good times.  But it occurred to me that our stories never developed very far, and I seem to see a pattern there.

Back home in Plainfield my friends and I used to play The Man From Uncle, and the plots never stretched out very far (in fact, the most imaginative conflict consisted of quarrels over which of us got to be Napoleon Solo.  Chris was always  Ilya Kuryakin, because he was the only blond in the bunch.)

People always talk about children having wonderful imaginations, and I agree, but it strikes me that they aren't very good plotters. 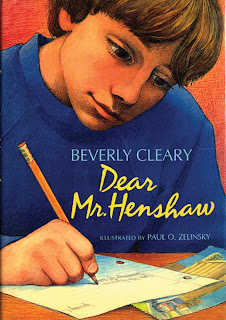 Ever read Beverly Cleary?  She's a children's writer from Portland, Oregon, where she is thoroughly beloved.  (The children's room at the main library is named for her, and there is a statue of her character Ramona, in the park in Ramona's own neighborhood.  But Cleary also wrote a terrific little book called Dear Mr Henshaw, in which a kid tries to deal with problems in his family by keeping a journal.  At one point a children's book author visits the boy's class and reads some examples of their creative writing.  Most of the kids made up stories but our hero wrote about a true experience.  The author gives him first place and explains that children his age don't have enough history to make stuff up yet; better to stick to real events.

All of which had me pondering when I did become old enough to come up with a complete (though God knows, not publishable) story.  I think it was sixth grade.   Mrs. Sonin, our English teacher, would let you stay after school and read your stories out loud to her while she graded papers.  Very tolerant was she, I suppose.  Amazing she didn't laugh out loud at our efforts, and not at the funny parts.

I read recently that someone said you had to write for 10,000 hours before you could be good at it.  It scares me to think about when/if I have reached that point.

So, a question for the scribblers out there:  When did you become a writer?
Posted by Robert Lopresti at 00:05