Flying Without a Parachute There was a time early in my career when we wanted to get into a house, but had no probable cause for a legal entry. Without probable cause, any evidence found inside the residence becomes fruit of the poisonous tree. In short, this means any items found inside get thrown out as inadmissible evidence in court.
So here's how it all went down.

The Setup
A street informant called the office.
"Hey, you guys got a warrant for Bopper, don'tcha?"
"Yes, why?"
"Well at ten o'clock this morning, Bopper's gonna be at James Lewis' house to make a score."
CLICK.
The phone got hurriedly hung up, the troops got hatted up and we all headed out to James Lewis' place where his apartment consisted of the entire third floor. We set up surveillance and waited. Time passed. A blue Cadillac pulled up out front, two men got out and went into the house. Ten o'clock went by. One of the two men, a tall thin guy, came out of the house and returned to the Cadillac, sitting on the passenger side. More time passed. Then it started.
"Bopper's walking down the street," came the radio call.
"Wait," replied the case agent.
"He's headed for the house," said the radio voice.
"Wait," said the case agent.
"He's going up on the front porch."


"Not yet," ordered the case agent.


"He has his hand on the doorknob."
"Hit it now," barked the case agent.
Four government vehicles immediately came alive, screeching up to the front of the house and bouncing over the curb. Car doors opened and agents with drawn guns came screaming out, making as much noise as possible.
"Police!"
"Federal Agents!"

Survival Instincts: Fight or Flight
Bopper morphed into Panic Mode. Bless his heart, he ran into the house we wanted to enter, but hadn't previously been able to acquire probable cause for a legal entry. However, there are exigent circumstances known as Hot Pursuit for situations like these. When law enforcement is in immediate pursuit of a fleeing felon, a search warrant is not needed in order for officers of the law to enter the same building which the pursued felon has just entered during the chase.
Having now found himself inside James Lewis' house, and seeing no good exit, Bopper chose to ascend the stairs to the second floor. The Thundering Herd close behind him, still hollering "Police" and "Federal Agents," shifted into Hot Pursuit Mode.
Having now arrived at the second floor landing and still not finding a good way out, Bopper continued his desperate journey upward toward James Lewis' apartment on the third floor. In full hue and cry, the mob followed at his heels.

Now, we take a short intermission to catch our breath and explain that in those days only seasoned agents had the privilige of entering the house. Snot-nose green agents, such as myself fresh out of the academy, were regularly assigned to the perimeter where nothing of consequence ever happened. Special Agent Pat got assigned to the back of the house and I got assigned to the front. We two newbies were designated to miss all the fun.
Bored, I decided to do something. Since the tall, thin Cadillac passenger had previously been inside the house, I thought maybe he'd be holding, so I knocked on the passenger window and flashed him my tin. In no time, I had him out of the car, hands on the roof, legs spread into the proper position and was patting him down. Just as I found contraband in his hip pocket, I heard a great noise behind me.
CRASH.
I glanced back at the house.

The Not (W)Right Brothers
Two bodies came flying out the front third-story windows and landed on top of the front porch roof. They stood up with guns in their hands. Neat.

A Sharp Drop in Business
Unknown to us, James Lewis already had company in attendance trying to conduct a little business. His company's nerves began to unravel as they noticed the Thundering Herd was ascending the stairs and coming their way. By the time Bopper burst into the room, their taut nerves snapped and they departed via the front windows.
At least now I had something to do.
Wheeling the tall, thin Cadillac passenger around in front of me, where I could keep an eye on him, I placed my gun hand on his right shoulder and pointed it at the two miscreants on the porch roof, ordering them to drop their weapons.
They looked at me, looked at their buddy the gun rest, looked at the distance to the ground and then decided, yeh, they'd drop their guns. Good thing. If there'd been a shooting match, I'm fairly certain my gun rest would have ended up hard of hearing in his right ear. Took another half hour before I had enough help to get them two off the porch roof.

One Landing for Every Launch
Back to inside the house. When Bopper made his Mad Hatter entrance into James Lewis' apartment, he was still looking for a rabbit hole. However, since all the front exits, also known as the third-story front windows, were occupied at the time, he opted for the side window. Bad choice as Bopper soon realized.
Left behind, James Lewis sat flabbergasted through it all. He'd never seen a show like this before and therefore sat quietly, readily giving up his two handguns, plus all his contraband to approaching members of the Thundering Herd.
Bopper, outside the house and now in mid-air, suddenly saw that what he had failed to consider during his hasty departure was that there was nothing to deaccelerate his downward flight, except a concrete driveway.
Turns out in all the confusion, none of us saw his exit.
At a descent rate of 32 feet per second per second, his right leg failed to stand up to the pressure of cement bringing an end to his ill advised experiment of flying without a parachute. He then crawled through a bordering hedge and "ran" away from us. Our Probable Cause had literally flown out the window. Took us an hour to catch up with him.

After that, I graduated to the level of door crasher.

So now you have the background. If you want to compare the above telling with the fictionalized published version, you'll have to acquire the Who Died in Here? anthology. All short story submissions to it required a crime in a bathroom. Author compensation was a sum of money, plus an air freshener. I still have the air freshener. 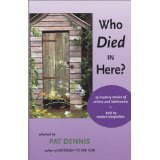