This is a description of Cathy in Steinbeck's "East of Eden", which is imho one of the best portraits of a sociopath that's ever been written.  And it's easy (once you have experience) to recognize her from without (much of the time, but we've all been fooled) but, as he points out, what about from within?  Yes, we can figure out ways to recognize the problems, the missing pieces in others - but for us...  how can we tell?  Something is left out, and we will never know it until we're surrounded by people who have it.  And even when we recognize that we're missing something, we still might not "get it":  can a completely color-blind person really grasp Franz Marc's "Blue Horses"?  Can a completely deaf person really understand why I weep uncontrollably at "Un bel di"? 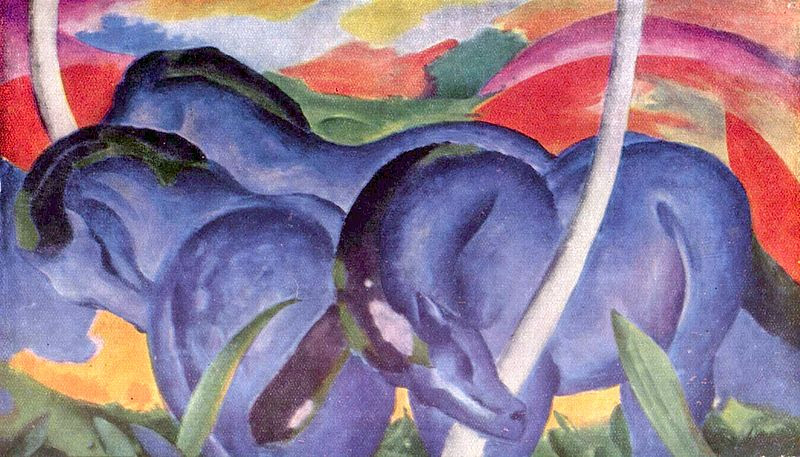 Now years ago, when I first read "East of Eden", I knew that Cathy was a true portrait, and that there are moral monsters.  But I also realized that there must be a whole range of possibilities, from the truly monstrous to the relatively minor.  I came to believe that, just as almost no one is born physically perfect and flawless, so almost no one is born morally, spiritually perfect and flawless.  We are all born with at least one piece missing, and our only hope is that it isn't a big one, and it is just one, and if not, that there aren't too many missing pieces. And I started to look around me, wondering, what's missing from him?  From her?  From them?  And, eventually, from myself?

The most obvious thing to me missing from me is a sense of home, of place, of rootedness.  Now I don't know if this is a missing piece, or something that was burned out of me when I was a child. I was born in Karditsa, Greece, to an unmarried teenaged mother who hoped the father would marry her.  He was rich, she was poor, it was (then) a small town, it was the 1950's, and there was no way in God's sweet green earth that he would ever marry her.  Instead, after a year of negotiations, (in which I am sure some money changed hands...) my father took me down to Athens, where he put me in an orphanage.  Move #1.  Within six months, it had been arranged for me to be adopted to a Greek-American couple in Alexandria, Virginia, but even back in the 1950's adoptions took a while, so I was put in a foster home for the duration.  Move #2.  A year later, the formalities completed, I was put on a plane, by myself, in Athens, with a note and a charm against the evil eye pinned to my dress, and shipped over to my parents in Alexandria.  (Side note:  doesn't that sum up a paradigm shift in treating children between the 1950's and today?)  Move #3. My parents and I lived in Alexandria for three years, and then we moved to southern California.  Move #4.

Now each time, I was moved from everything and everyone I'd ever known, and I'm not whining, but I'm sure that has to be at least part of the reasons I don't get attached to places.  Or perhaps I was born that way, and all those moves just added to it...   It wasn't that noticeable in the cities I've lived in, where most people are wanderers, and we all share in our own version of "the unbearable lightness of being."  I didn't even realize it until I moved first down South, and then out here to South Dakota, where people are rooted in the land, and it strikes them as a bit odd that I don't seem to miss any place I've ever been.  I tell them what is true:  I save my attachments for people.  And for books.  And for music.  I look at all the people around me, rooted in their homes, their farms, their ranches, who cannot even think of moving, and I cannot grasp it, because that's a piece I'm missing.

And here comes the other side of it.  I don't really care, other than as observation.  I'm perfectly happy traveling, moving, living here, living there...  Which I think is normal for abnormality.  I'm not sure we care about any piece we're missing, for a variety of reasons.  So what if people claim to have pleasures, or abilities, or visions that we will never have?  They might be lying.  They might be wrong.  They might be self-deluded.  And does it matter?  We've done just fine as we are.  Perhaps better than they are.  What does it matter?

Unless you're a writer, in which case, it's fascinating to think that each of us occupies our own worlds.  I'll never forget when I first grasped that what I call orange and you call blue may actually be the same color, and we'll never know it because we cannot truly express what we see.  Or hear, taste, feel, experience...  All we have is words, and words are assigned so young that we never ask, well, what do they describe?

Years ago, I taught a creative writing class at a community center, and the first exercise I did was to ask each person to write down the image they saw in their head when I said a word.  "Apple."  And then I had everyone read aloud the image.  Red apples, green apples, golden delicious, Apple logo, Apple Records, Boone's Farm Apple Wine (it was a long time ago), almost everyone had seen a different image.  And then we wonder why it's so hard to communicate what we want to say, whether in poetry or prose.  What if I said "disappointment"?  "Joy"?  "Beauty"?  "Desire"?  No wonder Flaubert used to roll around on the floor for three days in agony, looking for the right word.  But he had a piece missing, too…