Between April 14th and April 18th we got 22-24" of snow.  This led to a lot of eating, drinking, and calling April a drunk who wouldn't go home.  But now it's almost 70 degrees, and 99% of the snow has melted, and people are back out in t-shirts and shorts, and if you think we're all back in a good, trusting relationship with April you're crazy.  We're just humoring her until May gets here...

It did give me plenty of time to catch up on the news:

Don't you wish these baboons succeeded in their escape from a bio-medical research facility?  They baboons moved a large barrel, climbed over a wall, and ran for it:  (See  Baboon Escape).   Apparently, the facility has been cited "multiple times for animal welfare-related issues, including some deaths".

Calling Caesar - it's time to show up and rescue.

And, while he's at it, if he'd take care of Mr. Slager, who is horrified to find out that he's in the middle of the first case of someone testifying at their own murder trial, in which a Woman Burned to Death.  (Well, not quite - there's a Renaissance Italian lady who did, but that's another story, for next time).  Anyway, Mr. Slager and his girlfriend, Judy Malinowski, were arguing on Aug. 2, 2015, when he doused her with gasoline and set her on fire outside a gas station in Gahanna, a suburb of Columbus. “I never knew that a human being could be so evil,” Malinowski said in a videotaped interview on her deathbed. “He just stood there and did nothing. God, please, please help me.”   I hope they hang the bastard.

Domestic terrorists went on trial in the town of Liberal (you can't make this stuff up), Kansas, before an all-white jury.  The 3 militia members plotted to detonate a bomb at a housing complex in western Kansas where Somali immigrants lived and worshiped.  The men stockpiled guns and composed a manifesto about their anti-Muslim motives.  “Their rhetoric and their speech have revealed a hatred for Muslims, Somalis and immigrants,” an FBI agent wrote in affidavit related to the case, and that is an understatement, to put it mildly:  you can read some of it at the Huffpost Article here:  Domestic Terrorism.  None of it is fit to print.  Thank God, they were convicted.

The tragic part, the absolutely totally completely EFF-ED UP part of it is that they got all their ideas from conservative news:  Ben Carson, HUD Secretary, raving on Breitbart about "civilizational jihad"; Fox News' Monica Crowley raving about the same on The Washington Times; Ben Shapiro, Frank Gaffney, and John Bolton all have spread at least some of what got these men to decide that they had to blow up every Somali in sight.  (See Charles Pierce for further links here:  Right Wing Paranoia.)  And that's without going to the kool-ade crazy Alex Jones...

But there is good news:  The New York Times reported that on April 18, 1930, the BBC's evening bulletin was surprisingly brief: “Good evening. Today is Good Friday. There is no news,” and followed it up by 15 minutes of piano music.  (I'd wax nostalgic and all that, but I know what came next.)

No news was NOT the case for the United States on that date: 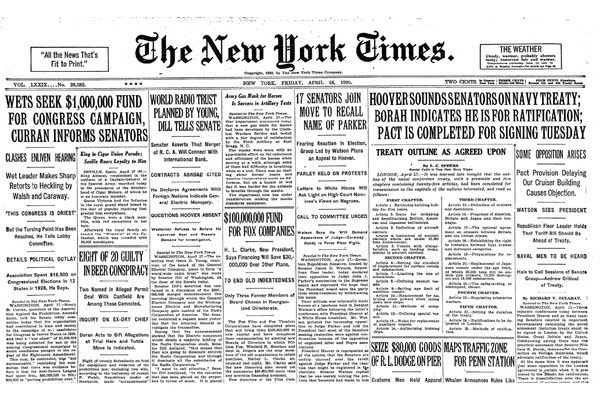 Once the snow was melted enough to get out of the driveway, we took a few days off from the daily grind and spent the weekend visiting the kids and grandkids in Colorado.  We also left behind our cell phones, and totally ignored the news, on or off the internet.  It was great.  We played endless games of "Settlers of Catan", and I only won twice.  We went for walks.  We ate a lot.  We saw the sights.  And we talked, talked, talked, talked, talked.

That's what an early spring vacation, or a long summer vacation should be.  That's the way it was when I was kid, when we played Canasta, Sorry, Chinese Checkers, and Gin whenever it rained or got too dark to run around capturing fireflies in glass jars.  Even back then the news loomed large and seemed dangerous, but it faded over a couple of days, and we had time again to talk and run around getting mosquito bites and grass stains everywhere, and then back for more lemonade and beer (for the adults, of course) and more talk.

Very relaxing.  Days where nothing much happens, except you're there, together.

And now we're back, and I've caught up on the news.  Most of it is the same old wars and rumors of war garbage we've been dealing with since Cain decided that Abel was dissing him and his vegetables.  But there's also the shining moments: The Duchess of Cambridge had her baby boy.   Most of my friends are amazed that she walked out of the hospital 6 hours later in high heels and a dress, but apparently an entire team of hairdressers, make-up artists, and a maid were there to make her look good, and I suspect drugs to give her the ability to walk while feeling that most of her is inside out.  And I'll bet - and I don't blame her a bit - that she went home, handed baby to a nanny and had a stiff drink in bed.

There's a great article on the NYTimes about "The Synchronized Swimming of Sea Monkeys". The video of them is absolutely hypnotic, but then my husband always dreads it when we go to the zoo in Omaha and I stand in front of the transparent jellyfish exhibit and watch them floating, up and down and up and down and up and... 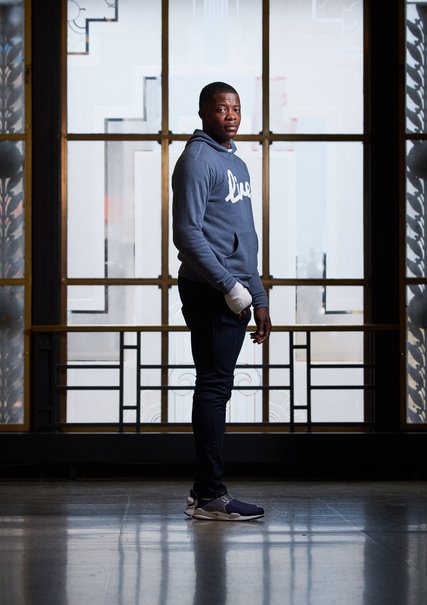 And, from the NYTimes, this man saved God only knows how many lives at a Waffle House in Nashville, TN, from yet another mass shooter with an AR-15.

James Shaw, Jr., 29 year old electrician, saw the shooter, scuffled with him, and grabbed the rifle, and hurled it over a countertop.  He was grazed with a bullet, and the barrel was hot, and it burned his hand, which is why it's bandaged in the photo.

In classic asshole style, the shooter cussed him out.

Typical:  the shooter couldn't understand why his victims wanted to (or should) live.

Wonderful:  Mr. Shaw was there to stop him.  God blessings, and a speedy recovery!  I hope you get all the electrician work you can handle in Nashville, and may you be blessed in your children and grandchildren forever.

Meanwhile, for those of you who are still tense, jellyfish.