Nora planned Thanksgiving with a sort of desperation --  a woman trying to hold on to her world as it growled and heaved about her.

There were two of Wiley Gallimard's fanciest toms, and chestnuts to be grated in absurd quantities, and cranberries from Bald Mountain to be mashed, and turnips and pumpkins and goodies galore . . . all requiring preparation, fuss, work, with and without Alberta Manaska's help . . . all requiring concentration.  And while her house filled with savory odors, Nora would brook no assistance from Alberta -- not Pat, not Hermione, not even old Ludie, who went about muttering for days about "these snippy young know-it-all brides."

Hermy dabbed at her eyes.  "It's the first Thanksgiving since we were married, John, that I haven't made the family dinner.  Nora baby -- your table's beautiful!"

"Maybe this time, : chuckled John F., "I won't have indigestion.  Bring on that turkey and stuffing!"

T. S. Eliot, in The Love Song of J. Alfred Prufock reflects on counting out one’s life in coffee spoons.  For me, more and more, I find myself counting out my life in Thanksgivings.  This is probably anchored in the fact that for the past thirty-some years Thanksgiving (by some thank-less tradition) has become my responsibility.  I cook the whole thing.  I used to have a real approach/avoidance conflict as the fateful day approached, but as the years have passed I seem to have fallen into a rhythm.  More often than not everything comes out fine in the end. 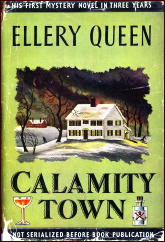 The holiday hasn’t contributed a background to many mystery stories (although an internet search will reveal a fistful of cozies that use the day as backdrop).  A notable exception to this is Calamity Town, Ellery Queen's first Wrightsville mystery, published in 1942.  Calamity Town is the only Ellery Queen selected by H. R. F. Keating in his 100 Best Books of Crime and Mystery, and a poisonous (literally) Thanksgiving gathering figures prominently in the plot.

As Ellery discovered when he found himself interjected into the midst of the Wrights' family holiday get together in Calamity Town, sometimes one of the less predictable aspects of Thanksgiving is the people who will in fact be in attendance.  One of the reasons Thanksgivings in our household are memorable is that they tend to have a completely different cast of characters each year, often comprised of folks who do not know each other, or who know each other just barely.  Throughout the years Thanksgiving has been a day when we “take in strays.”  We try to find acquaintances who otherwise have no one with whom to celebrate.

This year’s list of attendees has its own unique theme.  The usual core group will be present – Pat, me, our elder son Devon and our younger son Colin.  Colin’s significant other will also be dining with us, as usual on the holiday.  I am reflecting on Dixon’s column last week as I type this, particularly his discussion of the gay sheriff in the next county over.

Funny how I tend to more easily describe our son’s partner Kyle as a significant other rather than as Colin’s boyfriend.  I think, and hope, that this is a word usage issue and nothing more, like masculine and feminine noun endings in the romance languages.  I say this because we are otherwise completely at home with Colin’s sexuality and with Kyle, who has become another member of the family.  What will be particularly interesting this year is that we will be joined at Thanksgiving by Kyle’s mother and sister, who will be driving in from Michigan, and will be staying with us a day or two on either side of the holiday.  We have met them only once before, so the anxious prospect of getting on with it is understandable.  (Could this have anything to do with the fact that we have just had our living room and dining room painted?)   Rounding out the table will be Deborah -- a friend going all the way back to Pat and my law school days when the three of us met for the first time at registration -- and Deborah’s fourteen year old daughter Bekah.  So who knows what anecdotes will be added to the family lore when this group in fact assembles?

Anyway, all of the foregoing underscores what an important day Thanksgiving has become.  All of this preparation, all of this travel, all of this anticipation over a meal.  But the day-long preparation, coupled with throwing together people who often do not dine together at all except on that day, is bound to be the stuff of which family legends are made.  We have many.  Sometimes these have focused around mini-disasters, although none that can hold a candle to those experienced by Mr. Queen and the Wright clan in Calamity Town.  Over the years our calamities have been much more prosaic -- a garbage disposal that has not once, but twice, clogged completely on potato peels on Thanksgiving, once with an insidious blockage so far down the line that, unbeknownst to us, the water backed up through a drain in the lower level of our house, leaving us to discover the lower rooms awash with greasy garbage disposal water just about the time we were otherwise ready for pie.  And, again, not once, but twice, our refrigerator has gone out days before Thanksgiving.

But all Thanksgiving anecdotes in our family are not mini calamities.  Like all theatre, they seem to break also toward the comedic.  One of my favorite Thanksgiving yarns takes me back precisely 50 years, to 1962, when I was 13.  Other than my younger brother and me, everyone else at that long ago Thanksgiving dinner, served at my maternal grandparents’ home in Creve Coeur, Missouri, is now no longer with us.  But the memory lives.

Assembled around the table fifty years ago were my father and mother, my mother’s parents, affectionately known as Pop and Grandma Moelling, my father’s mother, known always as Grandmother Andrews, my mother’s sister Eunice and a great aunt, Aunt Ava, from Vandalia Illinois.  My grandmothers, like many in-laws, smiled a lot but in fact grated a bit on each other.  Grandma Moelling was sweet but a bit scattery.  Grandmother Andrews, four foot eight when measured in any direction, had (it must be admitted) airs of pretension.  One would never refer to her as “Grandma,” only as “Grandmother.”  She aspired to matriarch but never could quite pull it off.

After we had all taken our seats at the thanksgiving table that day in 1962, Grandmother Andrews, as she had every year within my memory, turned to me with the air of a director raising the  baton and said “Dale, say ‘Come Lord Jesus.’”

I squirmed in my chair.  As noted above, I was 13 years old on that November day in 1962, and had already begun my long journey into agnosticism.  But I had known what was coming, and I had a plan.  I was going to make my stand that Thanksgiving.  I cleared my throat and said “I don’t want to give the blessing this year.”

Grandmother Andrews gasped and stared across the table at me, eyes wide.  Stunned silence otherwise reigned.  Everyone looked at each other, uncertain how to proceed.

Finally my father cleared his throat, indicating that he was about to attempt a Deus ex Machina.  “I know what we can do,” he said eying the already unconvinced family members staring back at him.  “When we were at my boss’ house for dinner the other week we did something very special.  We all clasped hands under the table, bowed our heads and quietly to ourselves each of us said grace.”

Well we had to do something, so all nine of us clasped hands, bowed our heads, and looked down at our plates.

The silence was broken when Grandma Moelling said “Grace.” No one at the table knew what to do except my brother and me.  We burst out laughing.  Grandma Moelling just sat there flustered, trying to work out what she had done wrong.

Grandmother Andrews looked up, turned to my father, her son, and said “Wallace, that was nice.”  Then she glared across the table at me and said “Now Dale, say ‘Come Lord Jesus.’”

Happy Thanksgiving to all.
Posted by Dale Andrews at 00:01 8 comments