I'm jumping the season a little. This year, Banned Books Week will be late in September. During that week, we are reminded how many of the classics are or were on somebody's hit list in an effort to protect innocent (?) minds from the corrupting influence of new ideas. If you're of a certain age, you probably read many of these in school or even on your own. I did.

Obviously, the list expands as new authors produce new work, especially work challenging our assumptions about issues like race and sexuality. Unfortunately, few books get removed from that list, even if it's only in some miniscule township or school district ten miles east of Oblivion.

I don't like censorship and have been known to push the envelope myself. I understand the concerns, but hate the blind fear that often inspires it. When I student-taught in a suburb of Detroit, the school system had a standard form a parent had to fill  out if he/she objected to their child's reading a particular text. I wish I had a copy of it now, but I still remember the first two questions on the form:

1. Have YOU read the entire book?

2.  Are you aware of the critical responses to the book?

I found a list of the most-banned books over the last ten years. I've only heard of two of the books currently in the top ten and haven't read either of them. That makes sense because parents tend to focus on YA books to "protect" their children, which means the books show up in the classroom. I assigned several older titles still in the top 50, including Brave New World, Of Mice and Men, To Kill A Mockingbird, 1984, The Handmaid's Tale, The Things They Carried, and that constant target, The Adventures of Huckleberry Finn.

When I started teaching, the only systemic censorship I encountered was for Salinger's Catcher in the Rye. Someone complained about the book (To this day, I don't see the problem) and the school's principal, never one to take a stand, ordered the English teacher who maintined the book inventory to burn all the school's copies. Really. That teacher explained why he thought it was a bad idea and donated the books to the local veteran's hospital and various other venues. The principal had him removed and I got his job the following year. True story.

That was fifty years ago. Over the following years, I encountered a few parents and students who objected to certain books, but it was never an organized group effort. 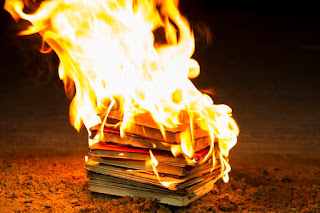 My first full year, two classes voted to read One Flew Over the Cuckoo's Nest and buy it from one of the many paperback book clubs common at the time. I'd never read it, and when I opened  the first page, I saw trouble brewing and turned to the seasoned veterans for advice. One told me to compose a letter to all the parents explaining why I thought the book merited study and have them sign and return it to confirm their approval. Only one parent objected, and when I invited her in to discuss her concerns, she signed the letter instead.

I taught in a town with a population that was about 1/3 Hispanic and 1/3 black, with a few Asians, too. The students in our district spoke seventeen different languages at home. Given that demographic, it's amazing I didn't start more brushfires, but the only other battle, which became routine, concerned Huckleberry Finn. Some of my black students refused to read it because of the 214 uses of the "N-word."

I gave those kids a choice of three alternative texts, and they could write a two-to-four-page essay about their experience reading the book OR present a five-minute oral discussion to the rest of the class. The three books were Native Son by Richard Wright, Invisible Man by Ralph Ellison or Their Eyes Were Watching God by Zora Neale Hurston. All three writers are black, and two of those books are considerably longer than Huckleberry Finn. Invisible Man is also pretty complex. I used this approach for six or seven years, and it worked well. After about three years, more and more kids decided to read Huckleberry Finn after all.

When I retired from teaching, both Wright and Hurston were part of the curriculum.

I actually objected to one book myself. In 1999, Robert Fagles produced a new translation of The Odyssey to enthusiastic acclaim. My school had been using the Lattimore translations of both The Iliad and The Oddysey for decades, and at the first department meeting of the new year, a younger teacher (pretty much anyone in the department was younger than I was) suggested replacing the older translation. I raised my hand.

"Has anyone besides me read the Fagles?" I asked.

"OK," I said. "It reduces the poetry to informal chat and weakens the majesty of the Lattimore. That may or may not matter to you. But let me point out that 3/4 of the teachers in this department are female. Odysseus always addresses Circe and Calypso, the two women he has sex with while he's away from his wife, as 'Bitch.' If that works for you, I'd like to visit your classrooms to watch you discuss it with your teen-aged students."

The suggestion died then and there. 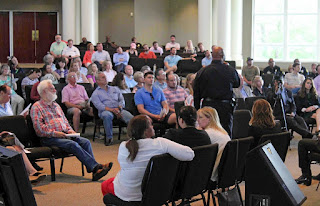 It reminded me of the commotion years ago over Brett Easton Ellis's American Psycho. His original publisher rejected the MS because of the violent and misogynistic content, and people rushed to both sides of the debate. Finally, one critic--I wish I remembered who--pointed out that the violence and ideology were secondary issues.

That still strikes me as the line we don't cross. Is it violent? Sexy? Political? Disturbing? Maybe, and maybe it hits a few of your personal buttons. But those things matter less if the author does his or her job well. I don't read some books because I don't like them. But that doesn't mean I won't let you read them. I wish more people felt like that. I still remember a comment Maurice Sendak made years ago in a writing workshop I attended.

"We teach children taste. What do we teach them when we give them bad books?"