Where Will YOU Go Tomorrow?

One of the biggest things I get kidded about since I retired is how much I now enjoy staying at home. After a career at IBM and a four-year stint in the Air Force I've done more than my share of traveling (I still have enough Frequent Flyer miles in my account to circle the world a dozen times), and now, much to the dismay of my far-flung family members and the disbelief of my globetrotting friends, I am perfectly content to spend most of my time inside the bounds of my own zip code. I do attend the occasional Bouchercon and required booksignings and non-negotiable events like weddings and funerals, but--with the exception of those journeys and trips to visit my mother and our annual trek to see our oldest son and his family Up North--the only doors I darken are usually those in our own home.

Part of that is because I'm just tired of traveling. Airports are even more of a hassle than they used to be, I'm too tall to be comfortable in most plane seats and car seats, and with age I have become less tolerant of any disruption to my daily routine. Besides, I can go anywhere I want to go, anytime I want to go there, via books and movies--without having to put down my bowl of ice cream or change into more presentable attire.

I will admit this line of thinking is a little extreme, but I do sincerely enjoy kicking back in my recliner and losing myself in a mystery novel or an adventure movie. Or, for that matter, any other kind of novel or movie.

Over the past couple of months, my cinematic "trips" include Saving Mr. Banks, Catching Fire, Nebraska, Into the White, Dallas Buyers Club, Sands of the Kalahari, The Book Thief, Killer Joe, All Is Lost, Mountains of the Moon, Captain Phillips, the second seasons of Longmire and House of Cards, The Mist, The Narrow Margin, Odd Thomas, and The Secret Life of Walter Mitty (adapted from the Thurber short story). These I enjoyed; others were less than thrilling. One of the strangest things to happen lately was that a film I thought I would love (Monuments Men) was a disappointment, while one that I thought I would hate (Walter Mitty) was delightful in every way. I mean, George Clooney was in a ho-hum movie and Ben Stiller was in a good one? Hey, nobody was more surprised than I was. 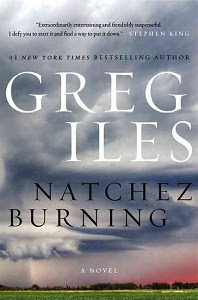 I'm pleased to report that the novel I've read most recently--Greg Iles's Natchez Burning--and the novel I plan to read next--Donna Tartt's The Goldfinch, which just won the Pulitzer Prize--were both written by authors from my home state of Mississippi. In fact, I consider Iles and Tartt to be two of the very best writers today, here or anyplace else. As I said, I've not yet started on Goldfinch, but I'll tell you, Natchez Burning was as suspenseful and well-written and satisfying as anything I've read in a long time. Members of the Ku Klux Klan are always ultravillainous, and in that book Iles serves up mystery and violence and justice in heaping helpings; Stephen King says, in a cover blurb, "Only a southern man could have written this book, and thank God Greg Iles was there to do the job." Speaking of traveling, that novel didn't require me to go far, even in literary miles: Natchez is less than two hours away. (As for The Goldfinch and the skyrocketing success of Donna Tartt, I'm seriously thinking about changing my last name to Floydd.) 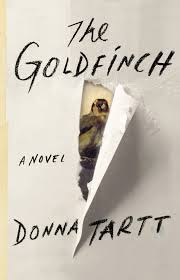 Another intriguing point about Iles's and Tartt's two novels is that they are vastly different in terms of both style and subject matter. Natchez Burning, a fast read even at 800 pages, features nonstop action and packs the surprising consequences of a forty-year-old murder case into a time period of only a couple of days, while The Goldfinch is (said to be) literary to its core, an elegantly written and epic meaning-of-life story of love, sorrow, and obsession in the art world. Opposite poles. But one of the best things about the fascinating universe of writing and publishing, I think, is that both kinds of books and both kinds of authors can excel and succeed. Another is that the same reader can sometimes equally savor, or at least equally appreciate, commercial/popular/genre fiction as well as literary/depressing/mainstream fiction.

A quick story. A little over a month ago, our second son was here at our house one night and mentioned that he and our daughter-in-law were planning to go to Paris for ten days, and asked if we'd keep their two kids (ages six and four) while they were gone. We happily agreed--extra time with grandchildren is something we love--and before he left to go home that night he noticed a novel I was currently reading, lying on our breakfast-room table. It was (coincidentally) Paris, by Edward Rutherford. We then talked a little about things I'd already learned from the book--facts about Notre Dame, Montmartre, the Louvre, the construction of the Eiffel Tower, etc.--and I offered to let him borrow it, to read and then take with him on their trip. He did, and said afterward that it added greatly to the experience of seeing the city. I know that my having read it made it more fun for me to watch the photos and movies they e-mailed to us during their time there, and the ones they showed us after returning home. It was as though I had made the trip also.

A question to my fellow "travelers"

I'll close by asking you this: what novels have you read and enjoyed lately, and what's in your to-be-read stack or your Amazon wish list? And while we're on the subject, what recently-watched movies did you like, and what are some you might be looking forward to, either in your local theatre or in your Netflix queue? I'm always eager to find out about new destinations.

I also continue to make journeys to faraway places in the stories I'm writing. Most are set in locations I've visited in the past, but some are those that are just interesting to me, and that I've come to know better via books about them (and Google Maps).

For readers and writers, a person's imagination (like Walter Mitty's) can be an effective means of conveyance.

Who cares about the price of gas and airfare?
Posted by John Floyd at 00:01 15 comments