by Art Taylor
I'm pleased to host V.S. Kemanis today for an insightful guest post on writing legal suspense fiction. I know Vija best as a fine short story writer whose work has appeared in Ellery Queen's Mystery Magazine and the EQMM anthology The Crooked Road, Volume Three, among other places. But she's also a novelist—Deep Zero, the fourth book in her Dana Hargrove series, releases next week—and as she discusses here, much of the series draws on her background as an attorney herself. As her website explains, "In her legal career, she has been a criminal prosecutor of street crime and organized crime for county and state agencies, argued criminal appeals for the prosecution and defense, conducted complex civil litigation, and worked as a court attorney for state appellate courts." An impressive career, an extensive resume, but how do you draw on one career in law when pursuing another as a writer? In her essay here, she addresses that point and more. Welcome, Vija! — Art Taylor


Writing Legal Suspense: Navigating the Personal and the Professional
By V.S. Kemanis


Writing what I “know,” drawing on my legal career, I created a series featuring a female assistant district attorney. To clarify, I recall a pleasant chat I had with two people in a noisy bar—the KGB Bar in Manhattan—on an evening I was scheduled to read from my work. A bit later, when they didn’t realize I was standing nearby, I heard one of them say to the other, “I can’t believe that woman told us she used to be a prostitute!”

Sorry to disappoint, but my protagonist is a female prosecutor, not a prostitute. I’ve given her some enviable qualities without being too liberal in the idealization department. She’s not without her vulnerabilities, some of which are taken from my own experiences.

I went to law school in the late seventies, a time when the male/female student ratio was finally approaching 50/50. By the time I entered the Manhattan District Attorney’s Office, the class of new recruits was almost evenly split along gender lines, but the courtroom was still largely a man’s world. I never had to break new ground, to go where women had never gone before, but I rode in on the tidal wave of female entrance into the legal profession.

Even so, it was not easy. I remember times when I felt like the fifth wheel or the unwanted interloper in the old boys’ club. A few uncomfortable situations from the early years will never fade from memory. There was an appellate judge who told me during oral argument that I sounded like a “schoolteacher.” A boss who made jokes about not being able to get around me in the hallway when I was pregnant. A roomful of seasoned investigators explicitly discussing a woman’s body, unmindful of my presence.

But these indignities were insignificant compared to greater challenges. Working in the criminal justice system can be an emotional rollercoaster, dealing with shattered lives, tough adversaries, and conflicting views on policing and punishment, to name a few things. For a young professional starting a family, juggling the demands of career and personal life can be nearly overwhelming. 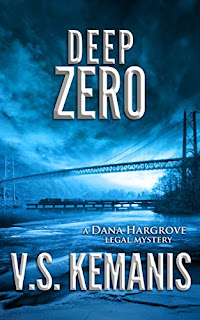 So, when I embarked on my legal suspense series, I wanted to wrap all of this up in my strong-female-lead-with-vulnerabilities character. Her name is Dana Hargrove. For some years now, I’ve been throwing impossible ethical dilemmas at Dana, many involving the intersection of her career and family.

In creating these novels, the easy part is plotting Dana’s criminal cases and ethical dilemmas. A pool of this stuff swirls in the back of my mind, cases I handled as a prosecutor or read about in the latter part of my career as an editor at an appellate court. Insert fictional characters, change some details, find a connection to Dana’s life, and the plot emerges.

The tough part for me is to incorporate the law into the story, without making it sound like a legal brief. I endlessly rewrite the sections with the legal underpinnings for Dana’s conflicts, dilemmas, and decisions. My goal is to be accurate and to make the law accessible and interesting. Not boring. (Really? The law can be boring?) This is where questions of writing technique and target audience come in. I imagine that any writer who relies on technical knowledge to advance a story faces similar challenges.

Let me back up and make an embarrassing admission. I’m absolutely fascinated by criminal law and courtroom procedure! This stuff has everything: it’s intellectual and technical and absurdly detailed but also grounded in basic moral tenets. Who couldn’t love it?

Well, I’ve come to learn that many fans of crime fiction do not share my thrill at the clever gymnastics of incisive legal argument. To be fair, many do. I could decide to limit my target audience to legal nerds like me. But I’d rather make my stories appealing to a broader audience, without sacrificing the legal conundrums. Comments from beta readers, reviewers, and fans have helped with this.

The main technique I use for making the law flow is to cut out a lot of filler. The dramatic bits are highlighted: a brutal cross-examination, the surprise testimony, the jury’s verdict in a close case. This doesn’t make it inaccurate or unrealistic—just condensed. Focusing on the consequences of a prosecutor’s decision, instead of the technical rules, is another way to make the story come alive. If Dana does X, she could be disbarred. If Dana does Y, the killer could go free.

Thanks to popular entertainment, basic legal terms are now part of everyday language: probable cause, Miranda rights, suppression of evidence. The writing challenge arises with ideas that haven’t made it into common parlance: statutory elements of specific crimes and rules of professional ethics. Sometimes, Dana goes through mental gyrations or discusses a problem with her colleagues. I read these scenes out loud to myself and others. Do they make sense? Does the dialogue sound authentic? Funny or not, a lot of lawyer-speak is completely authentic but won’t sound that way to a non-lawyer. “People don’t talk like this.” Actually, they do. But anything that bogs down the story should be trimmed or rewritten to make it more colloquial.

After four novels, my journey through Dana’s fictional world has been a new mix of the professional and the personal. The pastime of fiction writing has morphed into a profession. The creation of characters has morphed into my alternate reality. Dana, her friends and family, have invaded my life.

I ask creators of series if you agree: It’s a lot of fun having a second family.